Book Review: In Defense of Elitism 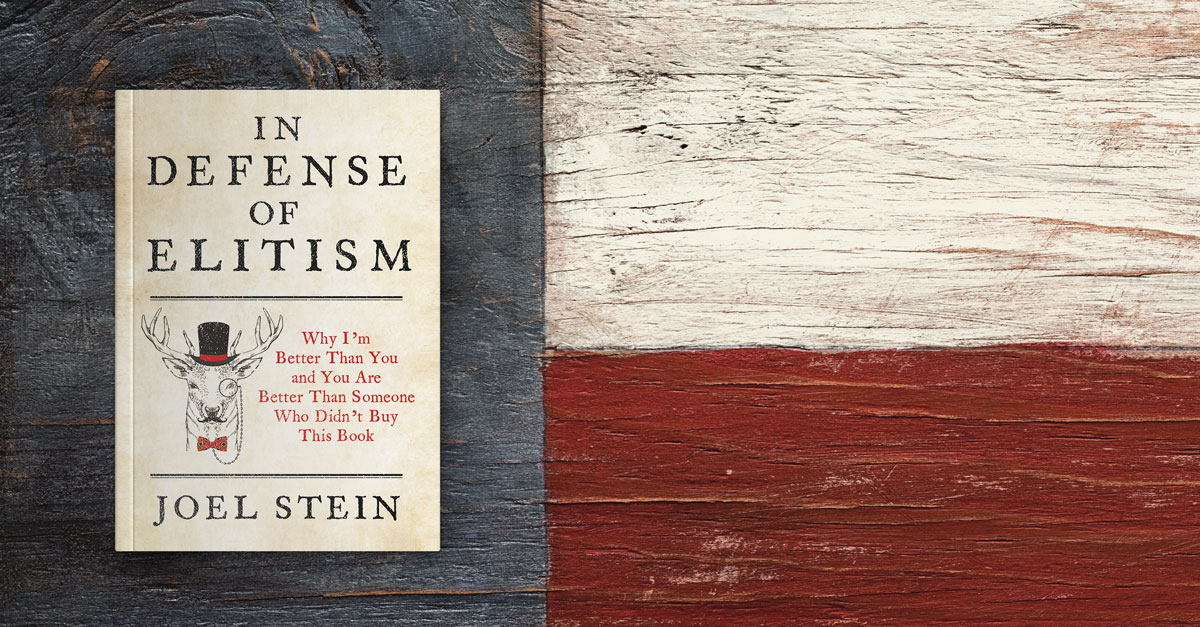 After the mainstream media incorrectly predicted the outcome of the 2016 U.S. presidential election, a number of mostly coastal journalists set forth to figure out why they’d been so off base. Generally, this involved going into the heartland to interview white working-class voters, then writing anecdotal stories that humanized a handful of individual subjects without shedding much light on why certain groups of voters—and not just the white working class—defied expectations. This journalistic voyage became known, pejoratively, as a Cletus safari.

Is a Cletus safari more tolerable when it’s undertaken by Joel Stein, ’93, MA ’94, the journalist-humorist whose penchant for self-deprecation is his stock in trade? Yes, yes it is. Stein opens In Defense of Elitism: Why I’m Better than You and You Are Better than Someone Who Didn’t Buy This Book with a sojourn from his home in Los Angeles to Miami, Texas. “I’ve come,” he writes, “because in the past, I’ve been found guilty of maligning people in print before meeting them, which taught me a valuable lesson: meet first; malign second.” He engages local residents in cordial conversations about race, religion and community; makes friends who keep in touch; and concludes that just about everyone in town is named Dee Ann. (Sorry, Cletus.)

What infuriates the judge and the people here is that while they’re doing the dangerous work of extracting energy from the earth so I can sit at a desk and write, I blame their industry for global warming. And fly in two planes each way to tell them that.

It’s after Stein disembarks from the safari, though, that In Defense of Elitism really takes off. He talks about whether decisions should be based on knowledge or instinct with Dilbert’s Scott Adams, and examines the pitfalls of believing in meritocracy with commentator Tucker Carlson. In perhaps the most revealing section of the book, Stein chats with writers who have deliberately created fake news and observes that all of us, no matter where we fall on the political spectrum, are susceptible to falsehoods when they confirm what we want to hear.

This freewheeling book is simultaneously thoughtful and funny, but its definition of elitism is wiggly. Sometimes, Stein uses the term to refer to anyone who attended a name-brand college; other times, to the select few who are invited to Davos (that’s the World Economic Forum in Davos, Switzerland, for those of us not on the invitation list). In the end, though, the various depictions of elitism contain a through line: evaluating facts for credibility, then marshaling said credible facts as evidence in support of an argument. And whether or not you call that elitism, Stein makes the case that it’s something worth defending.

A century ago, Stanford trustees approved a charge of $40 per quarter.