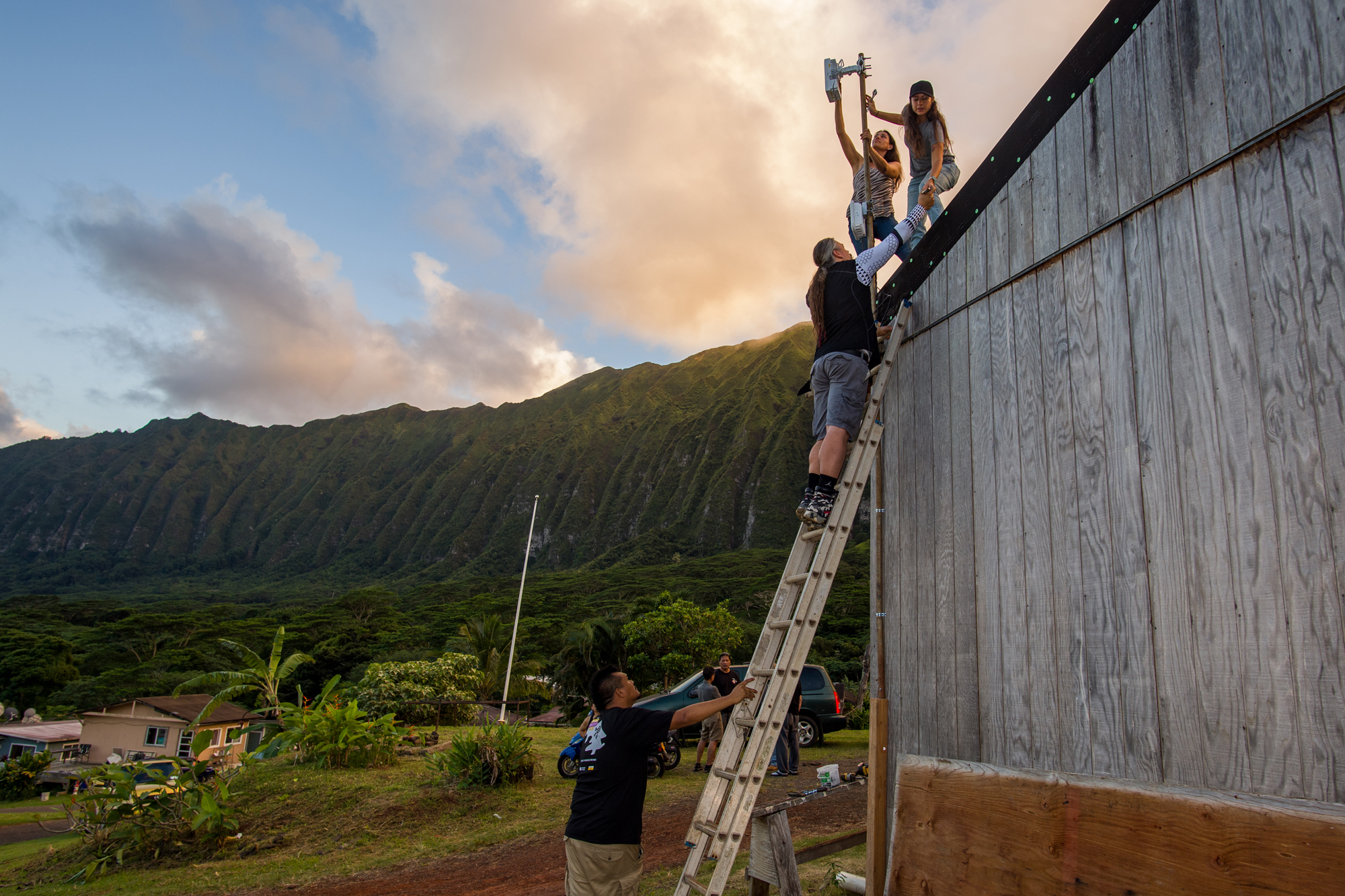 What would you do with a personal day? Maybe get your hair cut. Take your kid to the dentist. Go for a run. Or, if you’re Mariel Triggs, MA ’12, you might dash down to Arizona, where—in a few hours—you’ll help set up the equipment that brings high-speed internet to the most remote community in the continental United States.

An educational consultant at the time, Triggs did just that in late 2017. A few months later, a provisional FCC license in hand, the 423 members of the Havasupai tribe living at the base of the Grand Canyon suddenly had new capabilities—and new prospects. Kids could do online research for their homework while they were actually at home. Head Start teachers could take the online classes required for their teaching certificates. Students in a pilot GED program—there is no high school in Supai, Ariz.—could connect by satellite to classes being taught 168 miles away. And for a place visited by 40,000 tourists a year but prone to flash flooding, and reachable only by foot, horse or helicopter, better connectivity for educational purposes has inspired the tribe to plan for even broader applications.

“There’s so much hope with this broadband and our self-deployment,” says Ophelia Watahomigie-Corliss, the Havasupai tribal councilwoman who heads the tribe’s telecommunications and health services initiatives. “We may be one of the most extreme examples of the tribal digital divide, but our problems are Indian country’s problems.”

In the United States, 17 million of the 21 million people who lack fixed-line broadband access live in rural areas. (That’s one-third of all rural Americans.) The issue is twice as bad on rural tribal lands, where two-thirds of people lack high-speed internet connectivity. Eighteen percent of people living on reservations have no home internet access at all, according to a 2019 study by the American Indian Policy Institute at Arizona State University.

The Havasupai were one of the first tribes to benefit from the work of a small Oakland-based nonprofit called MuralNet, where Triggs is now CEO. Its mission is to help tribal nations build and operate their own networks. Although Triggs is the sole full-time employee, the organization maintains partnerships with nonprofits, companies, law firms and other volunteers to provide tribes—for free—with the training, legal counsel and planning support they’ll need to become self-sufficient. On any given day, Triggs might be doling out a network starter kit, drawing up an engineering plan, installing hardware on a roof, teaching people how to connect to their network or calling the FCC’s wireless division—again.

‘These frequencies travel over tribal lands. It’s an issue of controlling their own destiny.’

“So, Mariel basically does everything,” says Martin Casado, MS ’07, PhD ’07, the venture capitalist who co-founded MuralNet in 2017 with networking consultant Brian Shih. “It’s unbelievable the amount of work.”

In a way, MuralNet’s story began when Casado was a child. He grew up in Flagstaff, Ariz., attended public schools that served mostly Native students, and earned his undergraduate degree from Northern Arizona University (NAU). He met Triggs when they were both interns at Lawrence Livermore National Laboratory. Casado’s graduate research at Stanford on software-defined networking led him to co-found Nicira, a network virtualization company that VMWare acquired in 2012 for $1.26 billion.

Along the way, he met other Silicon Valley folks concerned with bridging the digital divide, but many were focused on faraway problems, like bringing cell service to Africa. “There are a tremendous number of unconnected people in the United States, and almost nobody was solving the U.S. problem,” Casado says. He started noodling with ways to combine his doctoral research, his company’s technology and open-source software for use with small cell towers. The result was a DIY network that’s inexpensive (about $15,000 to set up, compared with $200,000 for a large cell tower) and easy to use. It can be installed in an afternoon.

A chemical and materials science engineer by training, Triggs earned her master’s at the Graduate School of Education, where she tested online learning modules that could influence people’s mindsets about how they learn math. She then worked as a teacher and a consultant for 15 years. The opportunity to address the “homework gap”—the inequity between kids who can connect to the internet at home and those who can’t—was one reason Triggs joined MuralNet, first as a volunteer and later as its COO.

“It was hitting me hard that the stuff I was working on would actually increase the educational performance gap,” she recalls, “because people could use these golden bullets to do better educationally. And if you didn’t even have access to the internet . . .”

When it comes to the rural digital divide, infrastructure generally isn’t the problem. Under the Obama administration, fiber-optic cabling was trenched out to most schools. But many rural areas still lack connectivity, Casado says, because most broadband spectrum is owned and operated by the major telcos, which often don’t use it in rural areas because it’s not profitable. Even Educational Broadband Services (EBS) spectrum, once earmarked for schools and other educational entities, is controlled by telcos. While only schools and nonprofits could license it from the government, Casado says most of them turned around and leased their EBS spectrum to Sprint, thinking the company might build towers nearby and offer broadband to the communities. It didn’t.

MuralNet has set out to solve the spectrum problem for tribes.

“I’ve been talking to the chief of staff of the FCC’s wireless telecommunications bureau more often than my own mother,” Triggs says. “This is where being a little sister has been really helpful—I know how to needle people.” Last year, after months of consultations, the FCC announced the creation of a priority window, from February 3 to August 3, 2020, during which federally recognized American Indian tribes and Alaska Native villages can obtain unassigned EBS spectrum over their lands. In August, the remaining EBS spectrum will go up for auction.

Triggs describes the spectrum to tribal leaders as “invisible rivers in the sky.” She has made it her mission to ensure that people on all 514 tribal lands and Native villages with unclaimed EBS spectrum know about the opportunity to apply for it. She and a panoply of partners are hosting regional meetings and visiting tribal councils across the country to spread the word. “There will be a representative for every tribal land who knows what the opportunity means,” Triggs vows. “Whether they can get through the politics, I can’t say.”

Chad Hamill, a descendant of the Spokane tribe and vice president of Native American initiatives at NAU, introduced the Havasupai to MuralNet and vouched for the organization to a wary tribal council. (Watahomigie-Corliss says the tribe has been “used and abused” for years by people seeking free trips to the bottom of the canyon. For 15 years, they’d courted offers of support for their telemedicine efforts, all of which fizzled.) Hamill says the tribal priority window is a matter of justice. “An opportunity to claim this unused broadband is in some respects akin to claiming what rightfully belongs to tribal communities,” he says. “These frequencies travel over tribal lands. It’s an issue of controlling their own destiny. It’s an issue of self-determination.”

‘It was all about empowering our people, and that matches our lifestyle. That’s what we stand for.’

Sometimes communities have access to spectrum but lack infrastructure. And so, in November, Triggs was mounting antennas on a roof in the Oahuan village of Pu‘uhonua O Waimanalo, helping leaders of the Nation of Hawai‘i set up the state’s first community broadband network. Dating to 1994, the Nation of Hawai‘i is the oldest existing Hawaiian sovereignty group, and it operates from a 55-acre parcel of land it won from the state after its 15-month occupation of nearby Makapu‘u Beach. While Triggs was there, she trained the community’s members on how to connect to the network.

“We’re not the most high-tech people,” says Brandon Maka‘awa‘awa, the nation’s deputy head of state, “and she made it really comfortable and simple for us. We weren’t afraid to ask questions. It was all about empowering our people, and that matches our lifestyle. That’s what we stand for.”

Kids from Pu‘uhonua O Waimanalo used to travel to a Starbucks or a McDonald’s to get the internet connection they needed in order to file their homework. There was no broadband service, and residents relied on pricey cell phone hotspots and a few satellite dishes.

But Burt Lum, MS ’81, the State of Hawaii’s strategy officer for broadband, sought a new working relationship with the nation and introduced them to a series of partners, including MuralNet, that helped them get fiber-optic cabling to their land and the other hardware they needed. Now, Maka‘awa‘awa says, three-quarters of the houses in the community—about 12—have internet access.

Back on Havasupai land, efforts to expand broadband access beyond the pilot program continue. Only houses in the line of sight of the tower have broadband speeds, and the council wants to better connect the people living farther from central Supai. “As sovereign entities, we do have the ability to create policy on our own land—we just need some help sometimes,” Watahomigie-Corliss says. “We’re still working on it, but we’re farther than we ever have been. And MuralNet will be with us until the end—I know they will. They’ll make sure that the new telecommunications systems are up and running, they’ll give us training to monitor it and support it ourselves, and they won’t leave until we’re ready.”

The World in a Box

Nepalese schoolchildren get a better way to learn.

What the Kids Are Saying These Days

A Stanford scholar helps the world analyze how children acquire language differently—and just how much they have in common.