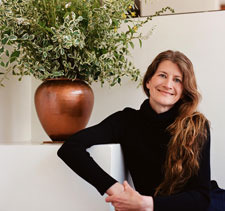 Refusing to take shortcuts and insisting on the purest, locally grown ingredients, Judy Rodgers had a profound influence on San Francisco cuisine over the past 25 years at Zuni Café, her beloved, triangle-shaped restaurant on Market Street.

Judith Ellen "Judy" Rodgers, '78, died in Berkeley on December 2 after a yearlong battle with cancer of the appendix. She was 57.

Rodgers grew up in St. Louis until age 16, when an exchange program took her to Roanne, France. She stayed with the Troisgros family, friends of a neighbor back home—and owners of one of France's most distinguished restaurants, the Michelin three-starred Les Frères Troisgros. Rodgers spent every afternoon watching the Troisgros brothers cook, taking notes and tasting dishes, and she left France with more than 100 recipes and a newfound love for cooking.

Rodgers was a senior at Stanford when she was given the opportunity to work the lunch shift at Chez Panisse, the Berkeley restaurant owned by culinary pioneer Alice Waters. Over the next several years, Rodgers cooked at the Union Hotel in Benicia, Calif., traveled to Italy for further training and was hired as the chef for the Manhattan restaurant Yellow Fingers.

Upon returning to the Bay Area to be the chef at Zuni Café in 1987, Rodgers asked the owner to install a wood-fired brick oven. A champion of using detailed techniques but simple ingredients, Rodgers transformed the restaurant, reshaping its eclectic Mexican menu into a rustic regional offering of locally sourced, slow-cooked food. She soon dreamed up what would become the restaurant's signature dish: a whole, brick-oven- roasted chicken served atop a warm bread salad with scallions, dried currants and pine nuts.

Rodgers wrote the bestselling Zuni Café Cookbook in 2002, distinct in its refusal to abridge ingredients and recipe steps for aspiring cooks. The following year, the James Beard Foundation gave Zuni Café its Outstanding Restaurant Award; in 2004, it named Rodgers the Outstanding Chef of the year.

"I would call Judy an artist," her husband of 19 years, Kirk Russell, said. "She had such a great sense of proportion and balance, of light and color and taste. She was very intuitive, and very complex."

When not at her restaurant, Rodgers enjoyed traveling with her husband, occasionally returning to France to visit the Troisgros family. "It was very much like Judy to stay in close contact with the family in those 40 years since," said Russell. "If you were her friend, you were her friend for life."

In addition to her husband, Rodgers is survived by her stepdaughters, Kate and Olivia Russell; mother, Cathy Rodgers; and two siblings.

Marking a small but historic step on the path to pluralism.