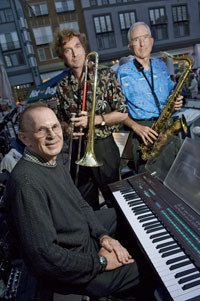 Economist Bob Flanagan happened to be teaching a course for Sloan master’s program executives the day he wore his big-band threads to class.

“They wanted to know why I was dressed in a shirt full of blue fishes,” the labor economist recalls. Flanagan told the Biz School students he was wearing his Hawaiian best for a gig that evening with Tuesday Night Live (TNL), a band he’s been playing tenor sax with since 1983. “They said, ‘Oh, we’d love to come.’ Then I told them it was in San Jose, and the room got very silent.”

So much for drawing a mosh pit of thousands when you’re a musician of a certain age, playing arrangements by Benny Goodman and Dizzy Gillespie. “Groupies?” electrical engineering professor and TNL trombonist Brad Osgood asks. “I always say the trumpet player gets the girl, and the trombone player loads the equipment. So I wouldn’t know about groupies.”

But their wives did turn out, along with a couple hundred jazz aficionados, for TNL’s recent performance on the Valencia Park stage at upscale Santana Row. Against a backdrop of royal palms, surrounded by trendy boutiques, the 17 guys and visiting female singer segued from Maynard Ferguson’s signature Blues for Kapp to the Duke Ellington ballad Isfahan.

“Our charts are fairly difficult, and at Tuesday night rehearsals, when we’re not cracking jokes, we really are paying attention to the music,” says Warren Hausman, professor of management science and engineering, and a keyboardist who was an original member of TNL back in 1979. “We’re pretty good right now.”

The three Stanford faculty who are part of TNL have been playing together for decades, rehearsing much of that time in the band room at Menlo-Atherton High School. They estimate that they play, um, one public performance per year. But there also are band-member weddings and summer concerts in Palo Alto parks, and for several years they were the house band for Congregation Beth-Am, playing all the High Holidays.

The three musicians agree that TNL’s glory years were in the early ’90s, when they played several nights each month at the Emerson Bar and Grill. “In chic Palo Alto, it was the only dump,” Osgood says. “They finally fired us—we weren’t getting paid, of course—for driving out the regular customers.”

The boys in the band took up their instruments at early ages, played with high school groups and found one another through a network known only to musicians in academe. Over the years, they’ve all played the occasional campus event. Osgood remem­bers a long-ago performance in the basement of the Business School, “where we dedicated something to the MBAs—‘Born to Run Things.’” Hausman says he looks forward to his department’s festivities at commencement each June. “We often hire a trio and they’ll have a keyboard guy. I go up with my cap and gown, and sit in for a couple of tunes, and the parents are quite impressed. They wonder where I make more money.”

After all, these are serious musicians. Flanagan regularly returns to his alma mater in New Haven, to copy arrangements from the musical library Benny Goodman bequeathed to Yale. “The great thing is, the clarinet part doesn’t say ‘clarinet.’ It says ‘Benny.’ And the trumpet part says ‘Harry,’ for Harry James.”

This fall, Osgood took his trombone to EE261, a course he was teaching about the Fourier Transform and its applications. “It’s all about analyzing signals, and musical signals are among them. You can analyze why the trombone sounds different from the trumpet when they’re playing the same note.”

Osgood is also the announcer for TNL, who signs off every band performance with, “Thank you very much for coming, and I’m John Hennessy, president of Stanford University.”

In a stage whisper, he will tell you that he’s been all the presidents. “Gerhard Casper and Donald Kennedy, too.”