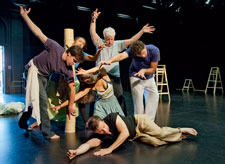 Beware of Greeks bearing gifts, goes the old saw. It's a reference to the legendary wooden horse that retreating Greek warriors left behind in Troy, purportedly as an offering to the goddess Athena. Instead, concealed inside the gigantic "gift" were more troops, whose surprise attack led to Troy's defeat—as Virgil's Aeneid and Homer's Odyssey recount.

Now a Hellenic gift to Stanford thespians gives the lie to that cliché. Thanks to the Michael Cacoyannis Foundation, the European Union and Greek government, the Stanford Summer Theater company will travel to Athens to present, fittingly, The Wanderings of Odysseus. Five students are among the cast and production team directed by classics and drama professor Rush Rehm, PhD '85. He's also looking forward to seminar/workshops with Greek students. On returning, SST will perform the play at the Nitery, Old Union, September 27 through October 5.

The chance to reinterpret classic Greek narratives at their source is all the more remarkable a gift, Rehm observes, in Greece's current economic straits. It all began with SST's 2010 production of the same drama, based on Oliver Taplin's translation of Homer. A Cacoyannis Foundation associate was in the audience.