A web sitcom’s quirky Black heroine is poised for takeoff.

Angry, sassy, sexy. Turned off by the limiting Hollywood stereotypes of African American women, Issa Rae came up with her role: awkward.

Her web sitcom, The Mis-Adventures of Awkward Black Girl, features J, a nerdy heroine whose embarrassments hail from the same school of comedy as The Office and 30 Rock. After a boyfriend dumps her, J shaves her head and sulks in her bedroom writing rap lyrics: "I hope you drown, that'll turn my frown upside down." An office drone at a diet pill firm called Gutbusters, J searches for love, choosing between co-workers White Jay (who shares her name but not her race) and Fred (who's Black).

Rae, '07, called upon friends in Los Angeles to shoot and act in the monthly series, which launched in January 2011. The audience quickly grew as the videos spread via blogs and social media. "Aren't you tired of seeing Black women look like idiots on television? Here's a girl—whom I suspect is a lot like the women who read this blog—quirky, funny, a little unsure of herself, rocks her hair natural and is beautifully brown skinned," raved blogger Christelyn Karazin, on her site beyondblackwhite.com.

After a few episodes, Rae teamed up with Tracy Oliver, '07, to improve the show's production quality. But after those few episodes, Rae was also so broke she couldn't afford a cup of coffee at a gas station. They turned to Kickstarter, an online funding platform, seeking $30,000 to make more ABG episodes.

Donations hit $3,334 during the first day, and they raised $56,269 in a month. "People surprised us. They were treating it like a movement and wanted to see us succeed," Rae says.

In recent months, Rae and Oliver have hit the road, with appearances at Google headquarters and at scores of colleges around the country. They screened episodes and led discussions on how to work on a low budget and how the web serves as an independent forum for people of color.

While growing up, they didn't find people like themselves portrayed onscreen. Oliver was a kid who read past her bedtime by sneaking in a nightlight. "That's my upbringing: People who study and are fascinated by weird things. But those women aren't allowed a place in film and television," she says.

In the third grade, Rae entered a program for gifted and talented students, where she was exposed "to things that aren't considered 'Black,' like the swim team and street hockey and Passover dinners with Jewish best friends. It was pretty much all downhill from there."

Both were thrilled with the opportunities they found at Stanford. "I feared that everyone would be HumBio, premed, and I wouldn't fit in," Oliver says. "When I got there, there were a lot more artists than I imagined. Who's to say a nerd school can't do arts?" She founded Blackstage Theater Company to feature works for and by people of color. 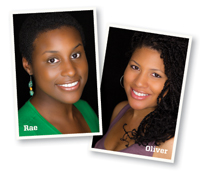 In college Rae staged adaptations of Spike Lee movies and a Motown version of Grease and filmed Dorm Diaries, a gossipy mockumentary. (Prospective students still check out the series for a peek at Black life at Stanford.) Her name was then Jo-Issa Diop, which reflects her roots in Louisiana and Senegal and the names of her grandmothers, Joyce and Isseu. Rae, her middle name, honors a late aunt, a visual artist who always encouraged her creativity.

Eventually, Rae hopes the ABG audience will grow enough to earn sustaining revenue from web ads or for the show to be picked up by a network such as HBO. She continues to act and build upon her production company. "To expand into new frontiers for television and for people of color, that's my goal."