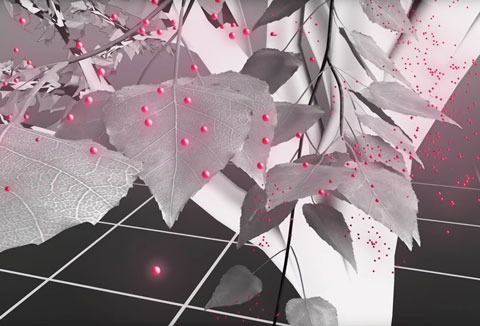 Photo: From video by Ker Than

Photo: From video by Ker Than

That could be the mantra of the scientists who used “flux,” a very faint flow of fluorescence from growing plants, to estimate crop yields. That fluorescence—reddish light from solar energy absorbed by plants and released back into the atmosphere—can be tracked by satellites. Led by former Stanford postdoctoral fellow Kaiyu Guan, a team of researchers used the data to measure the rate of photosynthesis, which fuels plant growth, and thereby project the ultimate size of a harvest.

David Lobell, an associate professor of earth system science and co-author of the study, explains the connection this way in a video for the School of Earth, Energy & Environmental Sciences: “This glow that plants have seems to be very proportional to how fast they’re growing. So the more they’re growing, the more photosynthesis they’re doing, and the brighter they’re fluorescing.”

This kind of work, as Guan emphasizes, “is very new”; it’s made possible by the ability to calculate flux, which became globally detectable by satellites only in recent years. NASA scientists, who already use satellites to map vegetation “greenness,” noted in 2011 that their additional success in measuring fluorescence would lead to a variety of applications for monitoring crop activity and health. Changes in greenness, they pointed out, show up in satellite imagery more gradually than fluctuations in fluorescence.

As Lobell, PhD ’05, details in the video, changes in flux—such as dimming that occurs on some days—provide immediate insight into environmental impacts on plants: “What do we need to worry about in terms of stresses that crops are really responding to? What should we really be focusing on in terms of the next generation of crops? What should they be able to withstand that the current crops can’t withstand?” Among other advances, ongoing research will lead to greater accuracy for crop-productivity forecasts, says Guan, although even the early work has drawn attention from the agriculture and commodity industries.

Guan is now an assistant professor at the University of Illinois at Urbana- Champaign but has a continuing association with the Center on Food Security and the Environment (a joint effort of the Stanford Woods Institute for the Environment and the Freeman Spogli Institute for International Studies).