What academia can do about the migration crisis.

SAFE ARRIVAL: A migrant ship reaches Lampedusa on June 10, 2015; it was the fifth such vessel to dock at the Italian port that evening. Photo: Daniel Hitchins Samson

SAFE ARRIVAL: A migrant ship reaches Lampedusa on June 10, 2015; it was the fifth such vessel to dock at the Italian port that evening. Photo: Daniel Hitchins Samson

In 2015, Europe experienced the greatest influx of migrants since the Second World War—more than 1 million, by International Organization for Migration estimates. Most of these arrivals came by sea, and most were refugees fleeing persecution in Syria, Iraq and Afghanistan. Within nine months, more than 800,000 migrants had descended on the Greek islands. Another 150,000 breached the Central Mediterranean from Libya, a longer and more dangerous route, before being intercepted and transported to Italy.

The immediate humanitarian emergency extends well beyond Europe’s borders to the sources of migrants’ displacement and their arduous journeys. The IOM estimates that in 2015 at least 3,692 people died trying to cross the Mediterranean, including a substantial number of children. However, this figure does not capture the fate of those who perished in the desert before they could reach the Southern Mediterranean and others who died in overland transit. It is a common fallacy to think that the frontline is defined by the borders of Italy, Greece or Malta. For the vast number of migrants, the frontline may lie anywhere in the Horn of Africa, the Southern Libyan desert, Iraq or Afghanistan.

After two high-profile boat disasters in which more than 1,100 people died, the European Commission put forward a new European Agenda on Migration. It identified the challenges of border management, rescue and humanitarian protection as well as the relocation and resettlement of migrants, which has proved unpopular to the majority of EU states; Germany, Italy and Sweden are among the exceptions. The agenda also focused on the need to curb migrant smuggling, the possibility of migrants returning to their home countries and development projects directed mostly to Africa.

European Union institutions have responded with a series of high-level conferences, promises of aid to host states Turkey, Lebanon and Jordan, and, more controversially, a new geography of razor-wire fences. Almost all EU states have reintroduced national border controls, which they so conscientiously sought to dismantle over the past two decades. The rationale behind this policy shift, so often cited, is that without effective external border management, the promise of free movement within the EU cannot be delivered. Thus, to preserve the rights of its citizens, the EU member states have sought to discourage new arrivals. The ghosts of tired policies such as “circular migration” are once again on the table.

Repressive efforts have failed to contain the flows, and there is little to inspire confidence in the management of the reception and resettlement of new arrivals. The first Syrians and Iraqis to be relocated reached Luxembourg only in November and totaled 30 people. Germany’s response, which has been to welcome, receive and house migrants, has been an exception, though many Germans now question the feasibility of Chancellor Angela Merkel’s policies. Some far-right-wing groups have reacted violently against the new arrivals.

One of the greatest challenges is the attack on the 1951 Refugee Convention. Just before 2015 ended, Danish Prime Minister Lars Løkke Rasmussen proposed that European states be permitted to overturn both the right of refugees to apply for asylum in a second asylum country (for example, in the case of refugees who transited via Turkey) and the right to family reunification.

Another central challenge is the pace of response to events. Since the European Commission first called for a new agenda on migration, influxes shifted from the Central Mediterranean to the Eastern Mediterranean. Further, the flows from Greece generated new internal routes across Europe, opening up new pressure points. Countries that had historically produced refugees, such as Croatia, found themselves hosting sudden arrivals, as trainloads of migrants were diverted following the closure of the long border with Hungary. Other countries followed Hungary’s example.

Indeed, while the British government extolled its generosity toward Syrian refugees in Turkey, Lebanon and Jordan, it simultaneously sent hundreds of meters of fencing to the French port of Calais, in the hope of deterring migrants from entering the Channel Tunnel. Other states, including France, simply pushed migrants over their borders.

In response to this situation, a number of European universities have come together to develop an evidence base that can be called upon to guide European policy. In September 2015, the U.K. Economic and Social Research Council and Department for International Development made over £1 million available for urgent data collection. 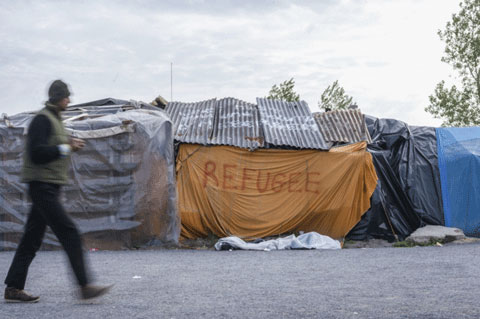 One of eight funded projects is ours, known as EVI-MED. We seek to gather data on the nature of migrant reception and to map reception “systems” in Greece, Italy and Malta, identifying governmental, nongovernmental and private sector actors involved in the identification, management, reception, integration and potential return of migrants who cross the Mediterranean. We will also survey more than 750 migrants across Sicily, Greece and Malta, providing an insight into their profiles, routes, experiences and migration plans. The survey data will be complemented by 45 in-depth interviews focusing on life histories, decision-making and the use of social networks in the migrant journey.

The aim is to understand how targeted services may be provided to migrants at critical points on their journey, from point of arrival to reception centers, in order to relieve the bottlenecks in Sicily and Greece, and to inform programs for relocation and potential return, while respecting migrants’ rights to humanitarian protection and dignity.

EVI-MED was born out of a previous collaboration between Middlesex and Kingston universities, the Migrant Offshore Aid Station (MOAS) and Migrant Report. In June, we sent 10 undergraduate and graduate students with backgrounds in international relations, cartography, European law, journalism, film and TV, and with language skills including Arabic, to work with programming and communications teams in our partner organizations. They spent three months in an EU-funded internship, documenting current search-and-rescue efforts in print, on film and online.

After scoping visits in Sicily and Malta, a team of Middlesex researchers saw an urgent need to collect and standardize a broad range of secondary data on migration, including statistics provided by search-and-rescue organizations, and national and European bodies. They concluded that this information should be integrated with data sets produced by international NGOs to create a synthetic database on migration trends and flows. We found that while EU institutions do collect data on migrant flows, much of it is backward-looking, and this has proved problematic.

For example, data provided by Frontex—the EU’s external border agency—are derived from five principal indicators: detections of illegal border-crossing, detections of facilitators, detections of illegal stay, asylum applications and refusals of entry. This approach has a number of limitations, the most important being the reliance on detection. There is also a considerable delay before Frontex data are released; their published reports may be out of date due to shifts such as the unanticipated influx from the Eastern Mediterranean. Further, the data are collected with border-control authorities in mind—an important but by no means exclusive audience interested in migration and asylum in the Euro-Mediterranean region.

In addition, the Frontex data are not immediately disaggregated by migrant category: They do not tell us if arrivals are would-be asylum seekers or economic migrants. This undermines the reports’ utility for the planning and management of migration policy beyond reception. Until arriving migrants’ status has been determined, usually after lengthy periods spent in a receiving location, EU member states are bound to respect international human rights agreements. They cannot easily remove migrants and are prohibited from returning them to situations where they may face harm—although, should the Danish proposals gain ground, this may change.

Given that the costs of planning for both temporary and future integration of migrants are burdensome and require considerable administrative and financial support, the EVI-MED project seeks to produce disaggregated data sets, a novel contribution to the management of the migration phenomenon.

The project benefits from close collaboration with a number of well-established specialist organizations that are conducting much of the field research, set to begin in early 2016. One of the proposed outputs is the development of a Mediterranean Observatory on Migration, Protection and Asylum, which is intended to facilitate knowledge exchange between researchers, policymakers, protection agencies and NGOs on issues relating to migration management, asylum, and search-and-rescue policy coordination. Our hope is that this research may then inform the development of European policy that both affirms the European Union principles of solidarity, and upholds the dignity and human rights of migrants.

Brad K. Blitz, MA ’97, PhD ’98, is a professor of international politics at Middlesex University London and a senior fellow at the Global Migration Centre, Graduate Institute Geneva. He is the principal investigator on EVI-MED and the author of Migration and Freedom: Mobility, Citizenship, Exclusion.