Will They Eat Our Lunch?

Robots may take many jobs, but human-automaton teamwork is a big challenge, too. 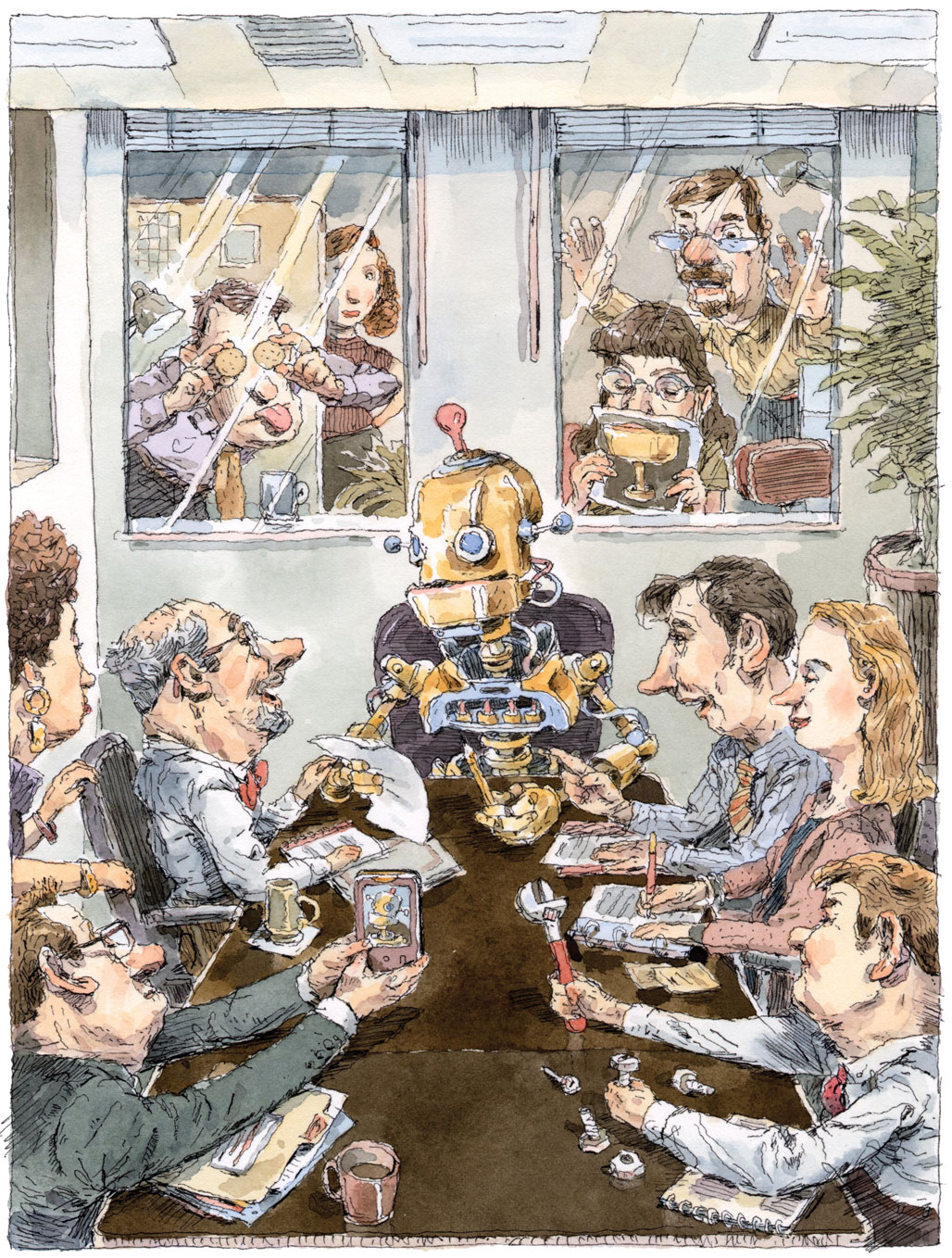 For several decades, economists and forecasters have been trying to analyze the impact of robots in the workplace in macroeconomic terms. What human jobs will machines take over, and how many of them? Is automation the unseen villain in the jobless recovery the United States has experienced in the past decade? Will focusing the U.S. educational system more on science- and math-based professions be undermined by robots that eventually co-opt those same jobs?

According to the Hackett Group, a Miami-based consultancy, automation and other productivity gains linked to technology will result in the loss of 2.2 million business service jobs in the United States and Europe between 2006 and 2016. Forecasters say companies will implement more and more robots for industrial applications such as warehouse stock-picking and automotive and electronic assembly. In 2012, the worldwide market for those robot systems, including related software, peripherals and systems engineering, was $26 billion, reports the International Federation of Robotics. And the market for so-called professional "service robots" is in its infancy. It's currently dominated by robots with highly specific uses and limited autonomy, such as bomb-diffusing robots for the military, or milking machines; but by 2016, robot makers will sell another 100,000 units across a variety of applications from surgery to security, according to the IFR.

(This number does not include personal and domestic service robots, such as relatively low-cost floor cleaners and toy robots, of which the IFR says another 22 million are likely to be sold by 2016.)

However, the specter of showing up at your white-collar job and discovering that the guy in the next cubicle has been replaced with a high-tech tin man is a long way away. More imminent is the prospect of service robots with varying degrees of autonomy being introduced in workplaces. As that era dawns, robot researchers are confronting some fascinating questions that are much less about tasks that robots can perform than what social and interpersonal capabilities they might need to persuade their human colleagues to accept them.

In part, finding answers involves rethinking the fundamentals of how people get along with each other, what ingredients help human teams function most effectively and even what makes a successful marriage. "This is a really interesting, rich area of research right now," says Pamela J. Hinds, associate professor of management science and engineering. "What does it mean to embody a robot and show up in a mechanical shell? What does it say about how people are perceived, and how does that affect the quality of collaborative work?" 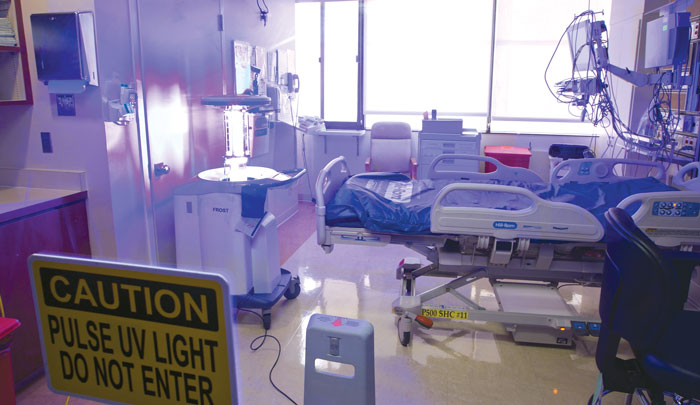 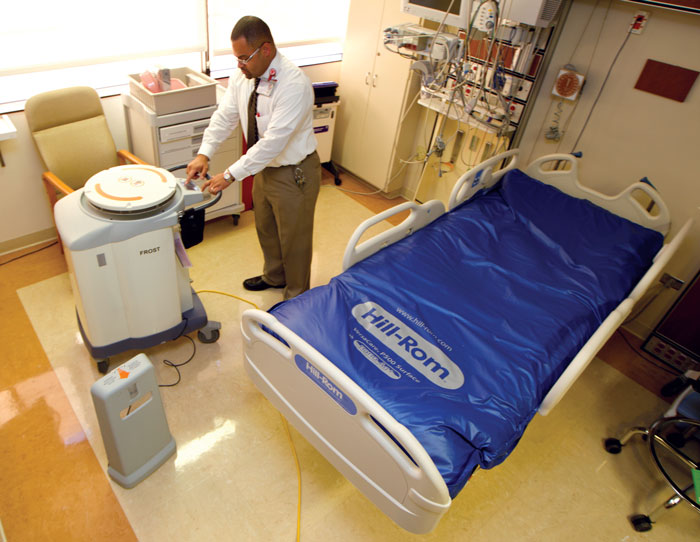 Looking at robotic precursors now being deployed effectively may offer some clues. At Stanford Hospital & Clinics, two popular members of the housekeeping department are nicknamed Dazzle and Frost. Roughly the size and shape of R2-D2 of Star Wars, each costs around $80,000. After they are rolled into patient rooms and turned on, a tower equipped with UV light emitters rises from their "heads" and flashes intense light bursts for up to 15 minutes. UV radiation can destroy some of the world's toughest pathogens, such as MRSA and C. difficile. According to Xenex, the Boston-based company that makes these robots, studies show they have halved the hospital-acquired infection rates from certain pathogens in some installations. Says Sasha Madison, manager of infection control and epidemiology, "The goal of Stanford Hospital is to get to zero hospital-acquired infections."

Dazzle and Frost don't replace housekeepers, whose frontline work physically scrubbing the "high-touch" surfaces most likely to harbor the bugs is a critical step. The robots do not talk, and they must be pushed into position by a human. The only decision they make on their own is to stop functioning if sensors determine that someone is inside the room. (The UV rays are not highly dangerous to people, but they can harm eyes exposed to them for prolonged periods.)

Even though they never pick up the tab for beers after work, Dazzle and Frost are popular with the staff. For one thing, "These robots don't represent any kind of a threat to anyone. They don't take jobs," notes Brad Igler, director of housekeeping. And they won't take them in the near future: "The amount of dexterity required [to do the mechanical work of housekeeping]would be off the charts," he adds. Clearly Dazzle and Frost are seen both by management and co-workers as, pardon the expression, tools, not as a threat to headcounts.

However, Hinds says experimental robots in work settings don't always fare so well. Co-workers can become annoyed when robot delivery units, for example, become stuck or get in the way. And their inability to perceive the ebb and flow of conversational patterns makes some people so annoyed they will reach over and turn down the volume of their speakers—or shut them off entirely. In one episode of the television drama The Good Wife this season,a "telepresence" robot—one actually sold by the Sunnyvale, Calif., company Double Robotics—features a tablet screen propped atop a pole attached to a rolling mechanism, so the real-time video face of an employee appears to be piloting it around the office. It arouses not only irritation from colleagues, but also hazing. In one scene, a prankster has taped a piece of paper over the device's camera, so it keeps bumping into walls.

Researchers such as Manuela Veloso of the computer science department at Carnegie Mellon have suggested that "co-bots," or robots designed to operate more symbiotically with humans, may be an important element in creating more balanced working relationships. Instead of trying to identify all the features the robot might need or producing devices that require extensive training of human operators, the robot might be programmed to do certain things autonomously but then ask for human help when it confronts a task it cannot complete.

Hinds's former graduate student Malte F. Jung, now an assistant professor in information science at Cornell, has studied the role of emotions in engineering teams. He believes full-fledged, autonomous robots won't be accepted and effective as team members until, at least at some level, they get some heart.

"The thing that fascinates me is the role emotions play in teamwork," explains Jung, MS '06, PhD '11. "Emotions are not just what make people feel nice and fuzzy; they are essential for the performance of a team." In that vein, he helped design an experiment taking place right now at Stanford's Center for Design Research. It's testing whether robots can improve the performance of a team by intervening when negative emotions surface.

Jung has conducted research based on the well-known theories of social scientist John Gottman, who has studied the behavior of married couples and can reliably predict which marriages are likely to survive over time. Jung says the same dynamics can apply to work teams. Social cues—whether the members are respectful of one another or demonstrate some level of contempt; whether there is a higher ratio of positive to negative comments; and also whether individuals quickly move to repair damage from a negative comment or interaction—indicate how functional (or dysfunctional) a group is.

Jung's experiment at Stanford is trying to determine whether robots might be useful in repairing breakdowns in a team's emotional dynamics. However, the concept is difficult to study and requires some clever interventions by the researchers, because the sensors and artificial intelligence required for a robot to perceive emotions and respond are yet to be achieved.

Much of the research into human-robot interface design has been led by MIT and Carnegie Mellon. Hinds has conducted a number of studies at Stanford's Center for Work, Technology and Organization, although one hurdle for this kind of research is a chicken-and-egg issue with the hardware. As in the social repair study, it is hard to test certain kinds of interactions because robots don't yet have sophisticated sensors and capabilities; however, the latter are so complex and difficult to develop that researchers are creating proxy experiments to help them prioritize which social skills might add the most value.

There are some interesting twists. Hinds says research in Japan has led to a robot trained to bow and perform other culturally appropriate actions that appear to make it more acceptable within the Japanese social context. But if the robot is being remotely controlled by a non-Japanese person, isn't there something fundamentally dishonest going on? "If I'm a person who would be sort of culturally bumbling in Japan but my robot is portraying me as if I am more sophisticated than I really am, is that a good thing or not?" she asks.

Hinds's lab also did research on a service robot deployed in hospitals. It carried pharmaceuticals, lab results and other items around the building. It was dependent on wireless networks to navigate the facility and go in and out of elevators. The study discovered that problems with the wireless network would disable the robot, freezing it in its tracks and blocking doorways or halls. Employees blamed the robots because they could see them, not the invisible networks. Says Hinds: "One paper from this data focuses on how different groups within the hospital made sense of the robot differently and considers how these differences contribute to conflicts around the use and acceptance of the technology."

A productive team results from a combination of training, aptitude, attitude and chemistry. Can robots be outfitted with logic, sensors and affectations sufficient to compensate for chemistry? Not anytime soon. Even most human teams don't understand all that well how to consistently get along with one another. But co-workers "can't turn your volume down as a person," Hinds observes. Instead, people tap into emotional intelligence and empathy to figure out how to get along. Those qualities still elude robots—even the ones we like.

Joan O'C. Hamilton, '88, is a frequent contributor to the magazine.

The Challenge at Hand

Brawny robots are nice; brainy ones would be better. Stanford engineers are on the case.

What Is Happiness, Anyway?

Experts offer their views at the Roundtable.