What You Don't Know About the Dutch Goose 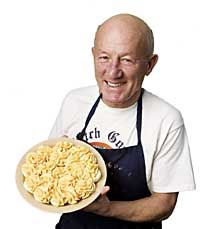 Ask any Stanford student where to go to satisfy your beer-and-eggs craving and you’ll get two words: the Goose. The iconic Dutch Goose in Menlo Park has weathered 40 years of Senior Pub Nights, minireunions, Little League celebrations, even wedding receptions. This year, owner Tom Moroney hands over the reins after nearly three decades steaming clams, pouring beer and sweeping up peanut shells. Don’t expect much to change, though, especially not the famously eclectic clientele. “We have people in here in Rolls-Royces and fur coats, and a gardener with holes in his pants,” says Moroney, ’66. Not to mention Stanford alumni who just can’t seem to get enough of the place. “As long as they’re well-behaved, they’re welcome.”

Don’t bother keeping your eyes peeled for a Dutch goose.
There’s nothing avian about the quirky name. When original owner Peter Eccles bought the eatery in 1966, it went by the name of The Busy Bee. Eccles renamed it after the bar in Kansas City, Mo., where he had his first beer. According to legend, that tavern was owned by a Mr. Gooseheim whose nicknames were “Dutch” and “Goose.”

More paprika, please.
Those mildly spicy deviled eggs have been a staple since Eccles opened the Goose. The recipe is secret, but Moroney will reveal that it includes paprika, pepper, mayo and more. He and his kitchen crew often go through 200 eggs per day; on Big Game day last year, they sold 400.

Same as it ever was.
The Goose isn’t much for change, and new owner Greg Stern told the Almanac weekly paper that is one reason people keep coming back. From the gaudy red Budweiser lampshades to the dusty Coca-Cola bottles in the corners, many of today’s Goosian decorations would be familiar to alums who long ago stopped chucking peanut shells on the floor. The flat-screen plasma TVs and free wireless Internet are, of course, recent additions. The unique atmosphere also appeals outside the Bay Area. Two of Moroney’s children, Tom III and Robyn, opened the Boise, Idaho, Dutch Goose 12 years ago.

Bartender, what’s the atomic mass of Einsteinium?
Serving Anchor Steam and clams isn’t neuroscience, but workers at the Goose tend toward a higher-than-average IQ. “When I was working, there were three people with master’s [degrees] from Stanford behind the bar, and another four had bachelor’s degrees from Stanford,” says Jeff Pinsker, ’81, MA ’82, who spent much of the 1980s pouring drinks at the Goose. “We had a fairly educated crew, at least as far as most dive bars go.”

Joe was here.
Moroney estimates that thousands have carved their names into the tables and walls over the years. Three years ago he had the tables sanded and laminated for easier cleaning (food was getting stuck in the deep etchings), but zealous customers sliced their way through the thick plastic. “When I got all the brand-new tables it really hurt to see them get wrecked up,” he says. “I don’t even try to stop it anymore.”

An unlikely office.
Pinsker operated a professional prank business during his years at the Goose and estimates he sold a half million dollars’ worth of pranks there, including a day of practical jokes played on Clarence “Bud” Ferrari, ’56, JD ’59. For his 50th birthday, Ferrari was subjected to one confounding moment after another, including a nightmare business meeting where the translator spoke no English, a call to help a friend meet bail, and more.

Meet me at the Goose, er, the altar.
Whether it’s a first date or an “I do,” the Goose attracts couples. When former bartender Julia Tussing, ’82, was married in Memorial Church, “the entire wedding party after the rehearsal went to the Goose,” she says. “And after the reception we went to the Goose.” The bar’s patio was recently the scene of a wedding ceremony—from nuptials to reception—and Moroney’s son Tom took his own vows in the Boise branch. “We closed down for the day,” he says. “It was quite elaborate.”

What Students Do with 'Venture Fellowships'