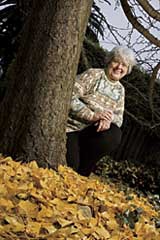 Ann Turner knows the power of family history. Her family tree is peppered with people who, as she has, lost hearing as they aged. One ancestor’s Civil War pension record mentions that the man was hard of hearing even before a case of the measles left him completely deaf. Stories like these hooked Turner on genealogy several decades ago.

Like generations of researchers before her, Turner pursued this hobby by poring over census records and digging through family letters for clues to the past. But Turner now has the ability to go one step further: she uses DNA tests. In Trace Your Roots with DNA: Using Genetic Tests to Explore Your Family Tree, Turner and co-author Megan Smolenyak show readers how a sample of cells (collected by swabbing inside one’s cheek) can provide a genealogical treasure trove. “DNA can really sort out family relationships,” Turner says.

Turner’s career started in other fields. After marrying Jim Turner, MS ’63, PhD ’67, and graduating from medical school, she worked as a psychiatrist. Gradually, she developed an interest in computers and worked as a freelance programmer specializing in neurological and psychiatric work.

Around this time, Turner came across a family memoir in which an uncle wrote about her father’s ancestors coming to America in 1635 on a ship called Abigail. Turner began thumbing through passenger manifests. There she found another familiar name—that of one of her mother’s relatives. One family had headed for Connecticut and another for Vermont. Their descendants—Turner’s mother and father—met and married 300 years later in Iowa.

It provides a basic genetics lesson, detailing the importance of mitochondrial DNA (the female line) and Y-chromosome DNA (the male). Using these, genealogists can triangulate with samples from contemporaries back to forebears they might share—even tens of thousands of years ago. DNA also can be used to make present-day connections, as in cases of adoptees’ trying to trace their roots.

Basic tests cost around $100, although more extensive work—tracing additional “markers” on the chromosomes—can run several hundred dollars. Turner and Smolenyak talk about how hobbyists, armed with analyzed samples, can connect online to create a “project” of people studying the same surnames. Turner, for example, had a great-grandfather who was orphaned when he was young. Tracing his unusual last name—Shrinard—led only to dead ends. But Turner used traditional genealogy to track down some Schreiners who lived in the same area at the same time and then confirmed with DNA testing that they were related. She sees work like this, using both new technology and traditional techniques, as the future of genealogy.

Sandra Froman was once a star L.A. lawyer who had never fired a weapon. Now she's president of the National Rifle Association.

What You Don't Know About the Dutch Goose