What You Don’t Know About Leland Stanford’s Horses 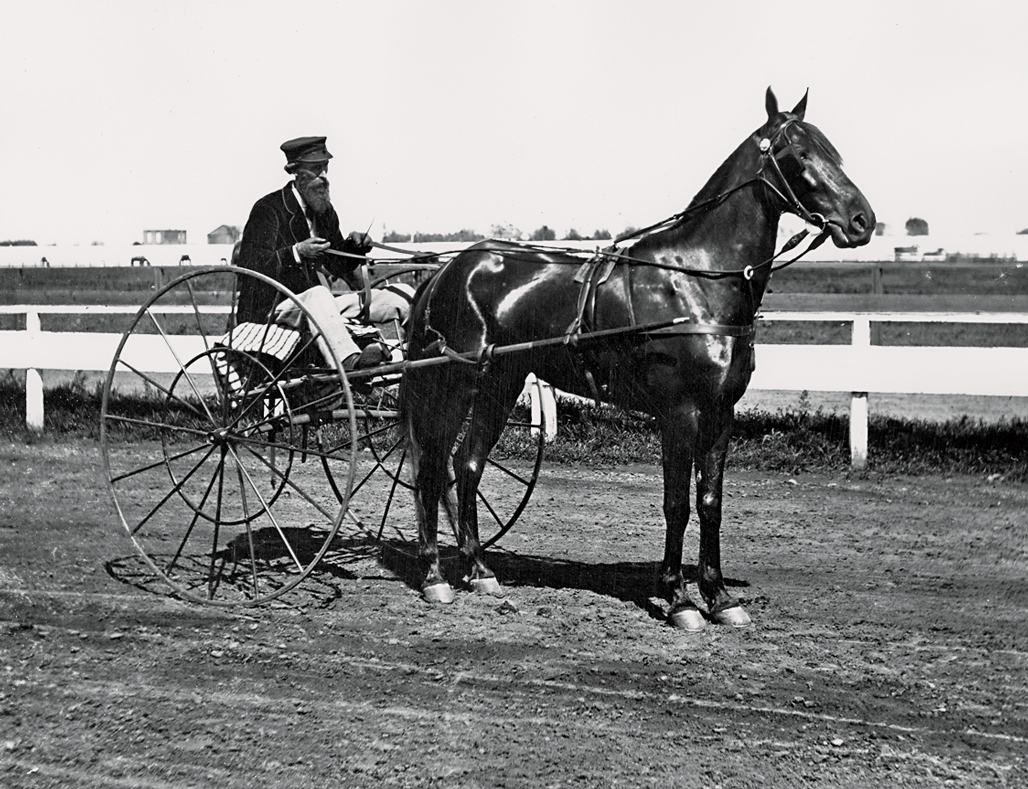 On October 8, the Red Barn on the west edge of campus will celebrate its reopening after a $4 million renovation. The barn is one of the last remnants of Leland Stanford’s Standardbred breeding operation, the Palo Alto Stock Farm—once called “the foremost establishment of its kind in the world” by the New York Times.

Standardbreds are used in harness racing, where the driver is pulled behind the horse in a wheeled cart called a sulky. Horses are either trotters, which move their feet on the diagonal, or pacers, which move the feet on the same side of their bodies together. In Leland Stanford’s day, a fast trotter was the equivalent of a race car, and competed in the 19th-century version of NASCAR, with tens of thousands of cheering fans.

Leland started buying fast horses in 1869, when his doctor advised him to take up driving them to regain his strength after completing the transcontinental railroad. Within two decades, he owned more than 700 and was experimenting with new breeding and training techniques. When he was at the farm he watched the horses train every morning—including the day he died.

The need for speed.

Leland pioneered a technique in which horses learned to trot as yearlings and were breezed short distances to build up speed. Previously horses learned to trot as adults, and were worked long and hard. The Palo Alto System was a success: Leland’s horses set 19 consecutive world records and in 1891 held the trotting mile record for each age group. Trainer Charles Marvin became famous for implementing Stanford’s training techniques. He gave Stanford full credit and admitted he was initially dubious.

Leland bet on the right horse.

Electioneer, an unraced 8-year-old bought in New York over experts’ objections, became one of the most enduringly successful studs in breeding history. Leland bred him to Thoroughbreds as well as Standardbreds; the resulting speed eventually silenced his critics. All current pacing record holders descend paternally from Electioneer. All trotting record holders descend from two of his granddaughters, Princess Royal and Cita Frisco.

He got one thing wrong, though.

Leland loved trotting horses and wouldn’t allow pacers on the farm. Pacing was considered an illegitimate gait in that day, but within two generations Electioneer’s most successful descendants had adopted it. Pacing turns out to be faster, by about four seconds to the mile. A perfectionist, Stanford probably would have approved.

Beating insolvency by a nose.

When the University faced a financial crisis after Leland’s death, horses were auctioned off at bargain prices. At a Founders’ Day ceremony in 1918, President David Starr Jordan dubbed them—perhaps in exaggeration—“the horses that saved the University.”

In the grove where many of Leland’s greatest horses are buried there is a statue some mistakenly think is Electioneer or another Stanford horse. The statue actually was cast in Paris by 1872 (when Electioneer was an unknown 4-year-old) and donated to the University by Board of Trustees president Timothy Hopkins. A true statue of Electioneer is in front of the Red Barn, donated in 2001 by L.W. (Bill) Lane Jr., ’42.

Some claim Leland Stanford failed to produce a lasting horse legacy because the Palo Alto Stock Farm closed after his death. But today, on tracks throughout the world, Electioneer’s descendants are trained using a modified Palo Alto system. The best of them race at speeds Leland could never have imagined. His fastest horse, Electioneer’s daughter Sunol, trotted her best mile in 2:08 ¼. Electioneer’s fastest descendant, Cambest, paced his record mile in 1:46.1. Says Gail Cunard, director of the Harness Hall of Fame in Goshen, N.Y., “Leland Stanford’s dream is still alive and kicking, trotting and pacing!”