The losses piled up and the injuries mounted. It would have been easy for Stanford s football players to give up. Senior Josiah Vinson explains why they didn t. 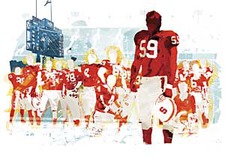 Just after the 2005 Washington State game, I sat on a bench next to our then-defensive coordinator, Tom Hayes, who chatted on his cell phone as we waited for the buses to take us back to the airport. The sky was a soft gray, and disappointed Cougar fans trailed by, bundled up against the cold. I sat content in the postgame glow of exhaustion and adrenaline, letting my body rest and my legs ache.

It was a good win. We had gone in with a unique game plan, calling running plays for quarterback Trent Edwards, ’06, that caught the Cougar defense off guard. Our own defense stood tall, intercepting a pass as Washington State drove down the field in the final minutes.

“We needed that win,” I said to Coach Hayes after he finished his conversation. He nodded. “No one knows,” he said. “No one knows how hard it is to win a game.”

I remembered his words during the next few weeks as we shook off the early-season embarrassment of a 1-2 start to win three straight Pac-10 games, including two on the road. These were heady weeks for the team, but we would end up falling just short of our goals. Eighth-ranked UCLA needed a miraculous comeback to win in overtime, and we weren’t out of bowl contention until the final whistle of our last game, a 38-31 loss to sixth-ranked Notre Dame.

What makes that season’s result and this season’s utter disappointment harder to swallow is the effort each of us has invested in the sport. Roughly a month of preparation goes into each football game. The off-season is an anachronism, gone the way of the single-wing offense, 200-pound linemen and the drop kick. The time between autumns is now a collection of other, smaller seasons: winter conditioning, spring training and the summer program. It is a profusion of days, each like the last, during which we know at all times where we have to be and grow nervous at the sound of a whistle.

Under Coach Harris, our winter strength and conditioning has been capped by the fourth-quarter program, which is designed to test the inner strength of each athlete. During the last two weeks of winter quarter we wake up around 5 a.m. to be on the field 10 minutes before 6, our breath hanging in the air as we cluster for conversation and warmth. The field is lit by floodlights powered by portable generators that fill the air with the tang of gasoline; the dew lies white on the turf. The test begins: a grueling conditioning circuit, then a series of sprints. If anything isn’t done absolutely correctly at full speed, that group repeats the drill and does up-downs, an exercise that involves running in place, diving to the ground on command, then springing back up without touching your knees to the ground. It’s even harder than it sounds. After the first week, we add up-downs to the end of the workout, working up to 120 reps, which leave us breathing the chilly air in ragged gulps.

As with the rest of our year-round workouts, these two weeks are designed to do several things. They build physical strength and mental toughness, but also serve as a test of desire. Our investment is what deepens the pain during a season like the one just past. After almost every loss this season, I thought I had reached my lowest point as a football player. Saturday nights I would lie in my bed unable to sleep, thinking about the game and my role, sure that it could not hurt more. But each week it did. There was the disappointment of the season, the accumulation of losses, but also the realization that the time I had with my teammates was drawing to a close. It hurt deeply enough that I realized how easy it would be to let go, to disengage, to stop caring. No one else would have to know. It would be my decision. Instead, I discovered with each successive week how much I was willing to give, how much the game meant to me.

Every alarm beeping in the morning dark requires a new commitment, and this is what forges the curious bond of football players. Much of this is due to the simple fact that we spend hours each day together, but it is not just proximity that binds us. Each of us has, in our own way, responded to the challenge that Stanford presents: playing top-level college football at a place with higher academic standards than our competitors. What brought me here was not the ideal of the true scholar-athlete, the polymath who excels in many different areas. Instead, it was finding people here who were willing to rise to the test. I count many on the team as friends, but even those I am not close to personally are men with whom I have suffered and pushed myself and with whom I am proud to have played.

Football, however, is unforgiving. Character alone does not win games; noble goals do not ensure success; and points are not given for virtue or work ethic. As people, we may have learned life lessons, but as football players the fact remains that we each gave deeply of ourselves, but our efforts were not enough. One can point to many reasons for our record this past year, such as the catastrophic number of injuries on offense or the youth on defense, but the danger lies in letting these become excuses. There are no disclaimers attached to win-loss columns. We are engaged in a competitive endeavor, and to settle for a minimal level of achievement would be to cheat ourselves. We are not here simply to compete, but to win.

Because of this, many will dismiss this last football season as a failure. It will be marked off as forgettable but for the few bright spots, such as our win over Washington. Our lockers will be cleaned out, our numbers assigned to incoming freshmen, our names taken off the depth chart. Coaches, alumni and fans will look forward to next season, and those whose role is complete will exit.

For those of us who have finished our final season of representing Stanford on the football field, our time here will not be so easily dismissed. We will remember doing up-downs in the reddish glow of dawn, the simple joy of accomplishment after a win. We will remember the quiet in the locker room after a loss, the sweat of the countless days that blur together into an indescribable whole, the pride and the pain. These are the things we will carry with us; these are the things we will not forget.

JOSIAH VINSON, ’06, is an English major and an offensive guard on the football team. In November, he was named to the Pac-10 All-Academic first team.

For the Love of Raptors