What to Do With Searsville?

The dam is a problem, but solutions pose troubling trade-offs. 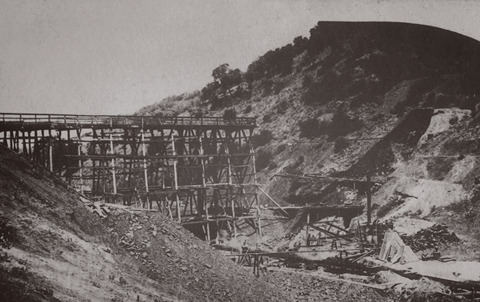 Young women, ebullient and dripping, line up along the concrete walkway above Searsville Dam. Beneath their naked feet, a sheet of water rushes under the platform and arches briefly into open space. The sheet breaks up, falls flickering against the face of the dam and tumbles toward a shallow pool 60 feet below. A diver at the front of the line climbs 20 feet to the third tier of the platform. She leaps into the air and arcs over the water of the reservoir, her Stanford diving teammates cheering her on as she slips seamlessly into the water.

Downstream, San Francisquito Creek winds its way unseen through thick oak trees and city streets to San Francisco Bay some five miles below. Upstream, tens of miles of tributaries cut their way like veins through green hills, converging to create a reservoir skirted by wetlands and sandy beaches. Throughout the reservoir, the cries of songbirds and the carefree laughs of college students punctuate the murmur of falling water on this spring day, 1922.

Half a century later, a young boy spends his days catching rainbow trout on Corte Madera Creek, one of the tributaries that feed Searsville Lake. One day he walks along an overgrown trail, stopping when his toes reach a strip of mud that frames the pool at the base of Searsville Dam. A silver torpedo bursts through the rippling sheet in front of him and collides with the hard face of the dam. The steelhead trout bounces back, splashes into the water and sends small ripples expanding toward the young man's feet. The trout leaps once more, collides with a meaty thump and falls back in defeat.

Fast-forward 20 more years, and Matt Stoecker is fighting to remove the structure he watched the trout struggle against. Having majored in stream ecology at UC-Santa Barbara, Stoecker directs an environmental consulting business and manages the nonprofit alliance Beyond Searsville Dam.

Stoecker tells of an idyllic past before the dam was built; how six tributaries converged to squeeze through the canyon that now holds the reservoir. He says the confluence formed a network of wetlands and riparian habitat that gave refuge to native waterfowl and songbirds. This habitat framed the natural migrating and spawning corridors of native steelhead trout; they in turn supported the ecosystem as they arrived each season from the ocean and left nutrients locked up in eggs, juveniles and the bodies of the previous generation.

"There's no other species like the steelhead that connects the mountaintops to the faraway oceans like they do," Stoecker notes.

That connection was severed in October 1891, when the Spring Valley Water Company, hungry for business and thirsty for water to supply a rapidly expanding San Francisco, flooded the wetlands and blocked the tight canyon at its base with an impenetrable concrete wall. [A pipeline meant to link Searsville to the City's water network was never built. In 1916, Stanford took title to the dam, whose waters today irrigate campus land, including the golf course.]

Stoecker says the reservoir has become an "artificial and unsustainable ecosystem" in which exotic large-mouth bass and bullfrogs prey voraciously on native species. The trout he caught as a child were the tattered ancestors of fish that once swam free in the ocean and spawned in the creeks above Searsville Dam—stranded now for more than 100 years. For Stoecker, Searsville Dam must be toppled to mend the bonds that have been broken.

Philippe Cohen directs Stanford's Jasper Ridge Biological Preserve, whose 1,200-odd acres encompass the dam. "When I first started working here," Cohen says, "I thought, Dams: lousy investments, they do a lot of damage, just get rid of it. And I've done a complete turnaround. Because the more I learn about it, the more I get a sense of what's going on here, the less I'm convinced—and you can't imagine how painful it is for me to say something nice about a dam."

While Cohen agrees that the reservoir houses many invasive species, he stresses that tens of acres of wetland have formed in the alluvial fan above Searsville Dam. With more than 95 percent of Bay Area freshwater wetlands replaced by heavy development, this habitat provides rare support for an incredible array of native birds, bats, invertebrates and bottom-dwelling creatures.

Stoecker maintains that removing the dam and allowing the area to return to its natural state would give the area wetland habitat far more valuable than the few acres Cohen espouses. "Philippe will keep talking about how it's a great bird habitat, but he won't acknowledge what was destroyed and what could be restored," he argues. Stoecker also believes that restoring the natural system would improve protection against flooding, which wreaked millions of dollars of damage in surrounding communities during the 1997-98 El Niño season. Stoecker thinks we can avoid such catastrophes by creating wetlands that will "act like a big sponge to soak up high flows."

Some doubt that the story is as simple as Stoecker suggests, or that the benefits he promises from removing the dam—new wetland habitat, flood mitigation and steelhead trout spawning grounds—will materialize. Cohen says he doesn't think the natural habitat predating the reservoir "looked anything like" what Stoecker claims and maintains that whatever flood mitigation removing the dam would provide already exists. Removing the dam, he says, will increase the sediment load downstream, which could damage steelhead spawning and wintering habitat by plugging up gravel beds and cold deepwater pools in the creek.

Civil and environmental engineering professor David Freyberg has studied sediment transport at Searsville extensively. He points out that rivers engage in a continual reshaping of the Earth's surface. They are the conduits by which sediment, small fragments of organic or inorganic material, reaches the ocean. When the natural flow of a river is altered with a dam, so too is the natural flow of sediment—often in unexpected ways.

Sediment enters Searsville Lake primarily during extreme flooding, at a rate that can be astounding. During the 1997-98 El Niño rains, scientists at Jasper Ridge monitored the sediment load of Corte Madera Creek, the tributary contributing most to the sediment problem at Searsville. "We were measuring in terms of suspended loads something on the order of 22,000 milligrams per liter," Cohen recalls. "You could go to McDonald's and get milkshakes thinner than that."

Sediment settles disproportionately in the alluvial fan behind the dam, and vegetation amplifies the process by stabilizing newly deposited sediment, allowing the alluvial fan to slowly creep up on the dam. Today, the reservoir has lost nearly 90 percent of its original storage capacity of 1,000 acre-feet [nearly 326 million gallons]. The next big erosion event could completely fill it with sediment.

If the dam were removed, Freyberg warns, it's not clear what would happen to the 12 decades of sediment built up behind it. An optimistic analysis suggests that most of the increased sediment load would end up in the Bay. At the other extreme, all the sediment could get locked up in the creek, causing the creek to grow shallower and the risk of flooding to skyrocket.

"It's not like you're suddenly allowing things to go back to being natural," Cohen argues. "This is one of those dams that has been around long enough that it has really—in some respects—integrated itself into the landscape, and the streams downstream and upstream have calibrated to its presence."

The question of what to do with Searsville Dam is not a new debate, and people like Philippe Cohen and Matt Stoecker have been playing opposite sides for at least 10 years. The issue has received sharpened attention since last April, when the U.S. Fish and Wildlife Service and the National Oceanic and Atmospheric Administration released the draft version of Stanford's proposed Habitat Conservation Plan [hcp.stanford.edu] for public comment.

The plan would mandate creek easements and no-build zones "to minimize the impacts of the University on federally protected species [including steelhead trout] and protect and enhance habitat on Stanford lands." However, beyond approving maintenance dredging in the reservoir and commissioning a feasibility study for a fish passage at the dam, the draft does not address the dam structure.

Catherine Palter, associate director of Stanford's land use and environmental planning department and project manager for the conservation plan, says the effects of dam modifications are too complicated and risk-prone to include in this plan. Stoecker's group, other environmental organizations and individuals have strongly criticized this approach in detailed critiques given to the federal officials scheduled to rule on the plan sometime in 2011.

Many recognize that following the status quo at Searsville Dam only forestalls the truly difficult decisions. Peter H. Gleick, president of the Pacific Institute, an Oakland-based research group studying sustainable resource management, warns that "California's water system was designed and is operated on the assumption that the future climate is going to look like the past—and it isn't."

Cohen is adamant that "the only option not on the table is the status quo," and all parties involved agree that something must be done relatively soon with Searsville Dam. Palter maintains that decisions like these take "years and years and years."

Conflict over water has defined U.S. history in many ways, and many water conflicts start with a river and end with a dam. "We literally couldn't support our population" without many of them, Freyberg says. Yet a serious challenge looms. The U.S. Army Corps of Engineers identifies nearly 84,000 dams in the country, more than one-third of them built from 1950 to 1970. Most dams have a projected life of 25 to 50 years, making the difficult decisions about what to do with them seem imminently crucial. Like Searsville, each will have its own idiosyncrasies that complicate any vision of a clean return to a better past.

The year 1922 marked the opening of a recreational park at Searsville Lake that served as a weekend retreat for college students and locals. In part to end conflicts between park-goers and researchers and students trying to study the ecosystem, Stanford closed the area in 1976. Little remains of the old diving platform, and as the muddy bottom of the lake rises inch by inch, there is little chance we could relive the sepia-toned vision it represents. Even less likely is a return to the time before man's heavy hand forever changed rivers by clogging them up with dams.

The desire to return to such a past reflects a common conception that nature and her rivers are good; man and his dams are bad. Cohen's response: "I don't like setting up dichotomies of what people do versus what is, quote-unquote, natural, as somehow being diametrically opposed. I think those interactions are more nuanced."

Cohen also questions restoration as "somehow going back to the past." The past may not be the best model for what we will face in the future; indeed, with Searsville, visions of our past cannot be our future reality, and the common notion of "restoration" requires some rethinking. After all, the only reason the women on the Stanford diving team stood dripping on the cold concrete of Searsville Dam was that the campus pools were, of course, only for men.

NICK WENNER is a senior earth systems major. This article is adapted from Diving Deeper at Searsville in Miller-McCune magazine.

Juggler Tim Furst loves vaudeville acts and he's made a haven for them at Seattle's Moisture Festival.

For a cause, a marathon on every continent.