She Dressed the Best 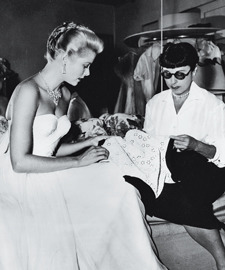 A tiny, straight-banged woman dressed in unimposing neutral colors, Edith Head didn't appear to be a fashion powerhouse. "Don't let her kid you," her Hollywood competitor Walter Plunkett famously said. "She owns a 50-acre estate surrounded by a picket fence of nothing but Oscars."

Actually, costumer designer Head, MA '20, won eight—for such pictures as All About Eve, Roman Holiday and The Sting—and racked up 35 nominations during a career that preceded talkies and concluded only days before her death in 1981. In her final picture, the noir spoof Dead Men Don't Wear Plaid, she redid a dress she'd designed for Barbara Stanwyck and saw it worn by Steve Martin.

Photo editor Jay Jorgensen writes about her life and work in the lavishly illustrated, 398-page book, Edith Head: The Fifty-Year Career of Hollywood's Greatest Costume Designer (Running Press, $75). Edith Claire Posenor was a desert child who made outfits for horned toads. In 1924 she was a French teacher and an art student trying to support an alcoholic husband when she fibbed her way into a movie studio job. Her gifts as a sketch artist and her canny tact with stars eased her to a place where she could blossom as a designer and become a persona so distinctive that she's been name-checked in a song by They Might Be Giants.

My Mother, My Cells

What I learned when I couldn't wait to explore my genome.

In the absence of seniors, a junior takes on new responsibilities.