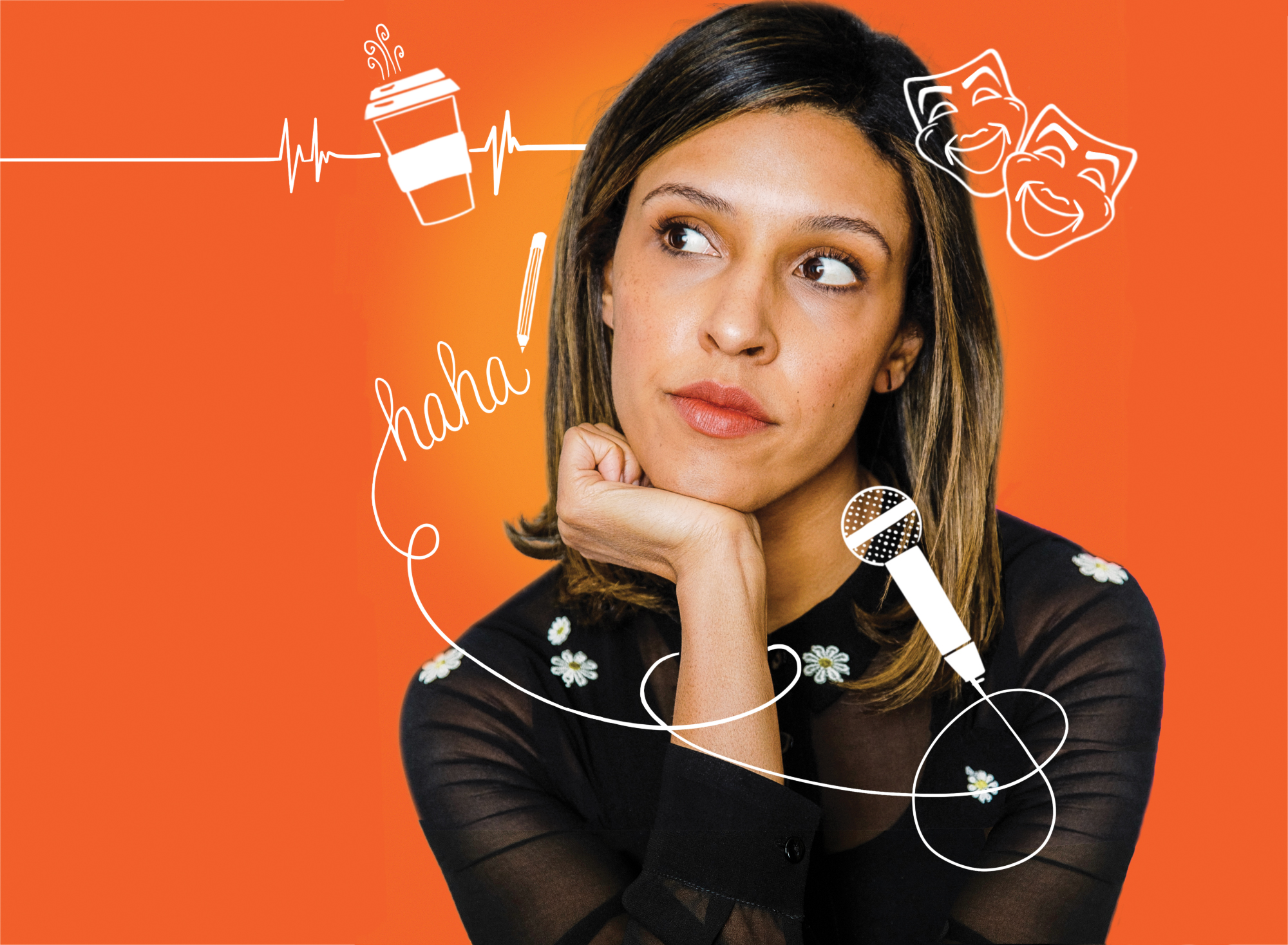 During her first week of work as a writer on The Late Late Show, Olivia Harewood stood in front of British actor and comic James Corden, making her first pitch to the star of the CBS talk show. The sketch she wrote would feature Corden as an astronaut and a song about melon, sung to the tune of “Nothing Compares 2 U” by Prince. Harewood changed the lyrics to “Nothing compares to honeydew”—which cracked up the other two writers in the room.

“I didn’t know if I should sing the song or not, but I decided to pretend to be comfortable and just go for it,” says Harewood, ’09. “James chuckled, but probably more at the absurdity of me as a new hire than at the actual idea. He told me, ‘Maybe less about the honeydew melon.’”

That sketch never made it to the stage: It was pitched to guest star Brad Pitt, but he declined to participate.

Harewood grins and shrugs. “To get that far on your second day? Not so bad.”

The job at The Late Late Show is a coup for Harewood, who has been writing jokes and performing in comedy shows since she graduated from Stanford. It is the kind of steady, big-studio creative work that many comedians dream of but few realize. When she landed the gig last summer, little did she know that she’d soon be trying to make people laugh amid a global pandemic.

In mid-March, instead of brainstorming and telling jokes over bagels with her colleagues in the writing room, Harewood began working from the Hollywood apartment she shares with her husband, Sterling, and her dog, Zuzu. She tailored her material for the show’s quarantine setting,Corden’s garage. At times, she and her co-workers joined the show via Zoom to play a role in a sketch or participate in a game. (For the #GettyMuseumChallenge, some of them dressed up as characters from classic paintings.)

People often ask how comedians stay funny during sad times. Harewood believes it’s at our low points that comedy is most compelling and important.

‘The world is very weird. Sometimes in the midst of everyone feeling really shocked and anxious, we are able to be strangely present and really listen to each other. And maybe comedy provides some relief.’

“I was probably doing the densest period of stand-up shows of my career when there was a mass shooting almost every day,” she says. “The world is very weird. Sometimes in the midst of everyone feeling really shocked and anxious, we are able to be strangely present and really listen to each other. And maybe comedy provides some relief.”

From a young age, Harewood was obsessed with I Love Lucy and liked to “wild out,” entertaining her family with jokes and full-on productions of plays. Her little brother, John, took on supporting roles. Their parents and guests made up the audience. “We were very much indulged,” she admits.

Yet Harewood resisted the entertainment industry after watching her parents endure the constant stress of working in an unpredictable field. Her father, Dorian, is an Emmy-nominated actor known for Roots: The Next Generations and Full Metal Jacket. Her mother, Nancy, played roles in Star Trek: The Next Generation and Remington Steele.

“Acting seemed terrible,” Harewood says. “It always looked like a very unfair profession. I thought, I’m going to be a doctor. I want authority over my life.”

When she got to Stanford and dove into her human biology classes, Harewood realized medicine wasn’t the right choice. But in cultural anthropology—ultimately her major—she thrived. The door to performing opened when a friend dragged her to Dan Klein’s sketch comedy course. Before Harewood knew it, she says, “I was a goner.”

“The clearest memory I have of Olivia is from her first comedy class,” says Klein, ’90, a longtime Stanford lecturer in theater and performance studies. The students from that class formed Robber Barons, a campus sketch comedy group that lives on today. “Olivia had a combination of being self-assured but in an easy way. Her take on the world is so funny, and her ability to laugh at herself is something that makes her relatable to all of us.”

Klein remembers a sketch that Harewood wrote and performed in which she played a student in a Stanford art class. The skit started with class members facing the audience as they painted. One by one, they turned around their paintings, revealing breathtaking masterworks. “She turned hers around and it was a naked stick figure,” recalls Klein. “The look on her face as she revealed it and saw where she stood among her peers—her face tapped into everyone’s insecurity.” It still makes Klein laugh.

“I take on innocuous things that relate to some widespread social insanity,” Harewood explains. “I find the things that fascinate or bother me. It won’t come as a shock to anyone that comedians are often very anxious and sensitive people who feel a lot of things deeply. Those are the components of our material.”

After graduation, Harewood headed to Los Angeles, where she moved back in with her parents and waited tables. Once she had developed enough stand-up material, she made a tape to submit to a Ventura, Calif., comedy contest. When she got the call that she’d made the finals, she began the next phase of her education.

‘She is 100 percent the person you want in your living room. She’s warm and funny, and she doesn’t assault you with the truth the way some comedians do.’

Harewood decided to give touring colleges and performing at corporate events a try. It wasn’t all standing ovations.

“I learned why you’re supposed to get paid a lot for corporate shows—because they are terrible,” Harewood says, describing a giant ballroom setting with round tables where everyone is talking over you. “I had to get through it because you have to do your time, but in the middle I was like, Oh, I am bombing. All these people are looking at me, and they aren’t laughing. Then I was, like, in that moment, a little bit happy because I figured this is as bad as it will get.”

Harewood soon joined the improv cast at Upright Citizens Brigade on Sunset Boulevard. She appeared on The Misadventures of Awkward Black Girl, written by and starring Issa Rae, ’07, and then interviewed for another not-to-be-named late show before another female writer recommended her to The Late Late Show.

“I was flabbergasted those first few days that I got to just sit and write jokes,” says Harewood. “There wasn’t someone telling me to stop and go file. I’m still in shock that I get to do this.”

Then there is her other dream—to join the ranks of just four women of color who have hosted late-night shows of their own.

Actor Amin El Gamal, ’08, has watched Harewood’s career since the two were undergraduates together. “She is 100 percent the person you want in your living room,” he says. “She’s warm and funny, and she doesn’t assault you with the truth the way some comedians do. She has this endearing and smart presence, so she’s in a position to make real change in the way people look at the world.”

In all her writing, Harewood says, she depends on two basics—harnessing “raw feelings” and sneaking in political humor when she can. She draws on personal details of her life, including that her mom is white and her dad is black, to let her audiences get to know her. She has a way of taking the mundane and weaving it into something funny. Take osteoporosis.

“My mom is an older white woman, and I would see her take calcium, so I ended up writing about it. Why does [the disease] always happen to women? I’m assuming it happens to women and not to men because, as women, we don’t want to be rude and leave a skeleton behind when we die.”

An Olympian, a Magician and a Photographer Walk into a Zoom

An Olympian, a Magician and a Photographer Walk into a Zoom