Sixty years after the nuclear tests, the groundwater is contaminated and the coconuts are radioactive. But are the coral reefs thriving? 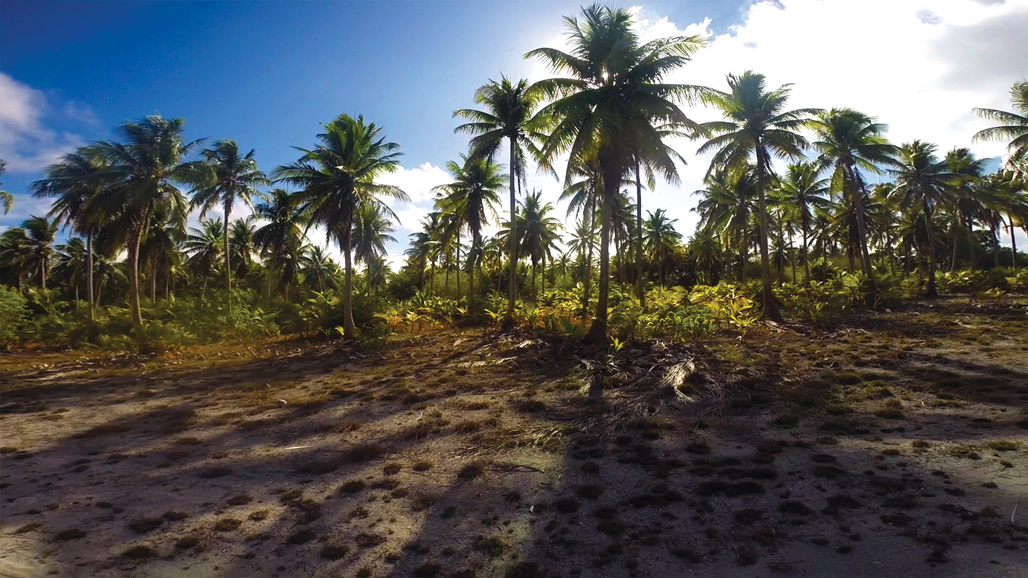 MANICURED LANDSCAPE: Bikini Atoll is beautiful but eerie, say those who have been there. Palm trees are planted in rows, animals haven't yet learned to be wary of humans, and giant radioactive coconut crabs scuttle about. Photo: Dan Griffin

MANICURED LANDSCAPE: Bikini Atoll is beautiful but eerie, say those who have been there. Palm trees are planted in rows, animals haven't yet learned to be wary of humans, and giant radioactive coconut crabs scuttle about. Photo: Dan Griffin

Nearly 60 years after the last of 23 nuclear explosions in its land, air and water, Bikini Atoll again looks like the idyllic Pacific paradise it was in 1946 — a bracelet of sandy, palm-covered islets encircling an azure lagoon. But it doesn’t take long to pick up on Bikini’s enduring eeriness, says Stanford biology professor Stephen Palumbi, who visited the remote atoll for a 10-day research trip featured in Big Pacific, a documentary that aired this summer on PBS.

At one point, Palumbi was boating around Bravo Crater, a mile-wide scar blasted into the lagoon by the most potent U.S. bomb ever detonated, when the navigation system began screaming a warning. The device thought they had run aground. The boat, Palumbi says, was in 160 feet of water.

It took a moment to realize the alarm wasn’t malfunctioning. The navigation system was simply relying on maps that haven’t been redrawn since before 1954, when a bomb 1,000 times more powerful than the one that dropped on Hiroshima vaporized three islands in the lagoon, including the one where the expedition crew was.

Using the navigation device, they then boated around the perimeter of the missing coral to estimate how much mass had been hurled heavenward. “It’s equivalent to 216 Empire State Buildings being blown into the sky,” Palumbi says. “These tests are the most violent thing we’ve ever done to the ocean.”

Yet when Palumbi — the director of Stanford’s Hopkins Marine Station — and others dove near the crater’s rim, they encountered something even more astonishing to behold: a reassembling ecosystem, including schools of large fish, reef sharks and robust coral, which may have begun life as little as a decade after the area’s annihilation.

“We found, much to our surprise, not just scattered corals, but very abundant, big healthy coral communities — corals larger than cars scattered about the edges of a hydrogen bomb crater,” he says. “You’re kind of looking at that and thinking, ‘Well, that’s strange.’

“Frankly, the visual and emotional impact of it is just stunning.”

Given their short life spans and their mobility, the hearty fish were comparatively easy to understand. But the corals look like they have been growing in place for 50-some years. How they emerged from such toxic beginnings is a question Palumbi and doctoral student Elora López hope to illuminate using the genomes of samples they took from Bikini. It’s an area of research López says has received scant attention.

‘It’s equivalent to 216 Empire State Buildings being blown into the sky. These tests are the most violent thing we’ve ever done to the ocean.’

Initially, they plan to sequence the full genomes of their samples, López says. Then, using bioinformatics methods originally developed to study cancerous tumors, they plan to create a map of mutations in the coral colonies to compare with samples taken from American Samoa and, they hope, from pre-bomb Bikini.

The research, Palumbi says, could eventually have ramifications not just for understanding how corals tightly manage their genes, but for advancing therapeutic applications to prevent cancers and other mutations in humans.

“The terrible history of Bikini Atoll is an ironic setting for research that might help people live longer,” Palumbi says. “By understanding how corals could have recolonized the radiation-filled bomb craters, maybe we can discover something new about keeping DNA intact.”

Getting to Bikini is a logistical feat. The atoll is in the Marshall Islands, halfway between Hawaii and Australia. For most outsiders, it takes several island hops, including a 27-hour boat ride. The few who make the trek are typically expert scuba divers keen to explore the armada of sunken warships, including the USS Saratoga, an aircraft carrier the length of a Manhattan avenue block that lies on the lagoon’s bottom. The ships — some loaded with animals — were targets in the tests.

It’s that remoteness that damned the atoll to inclusion in America’s nuclear “Pacific Proving Grounds” soon after World War II. The United States persuaded Bikini’s 167 inhabitants to relocate by assuring them a quick return, a promise that quickly soured as the residents were shunted among inhabitable islands and exposed to radioactive fallout. 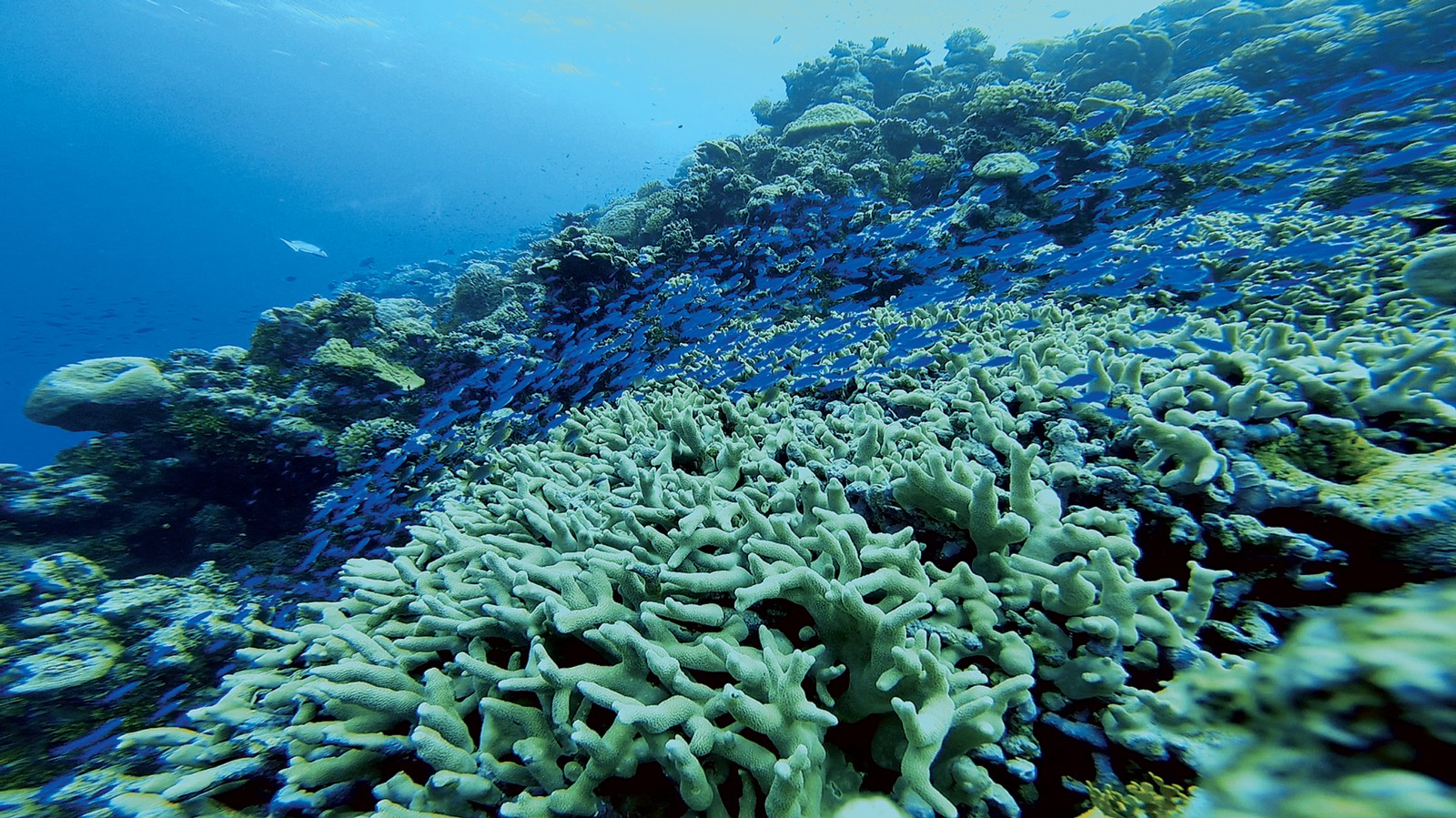 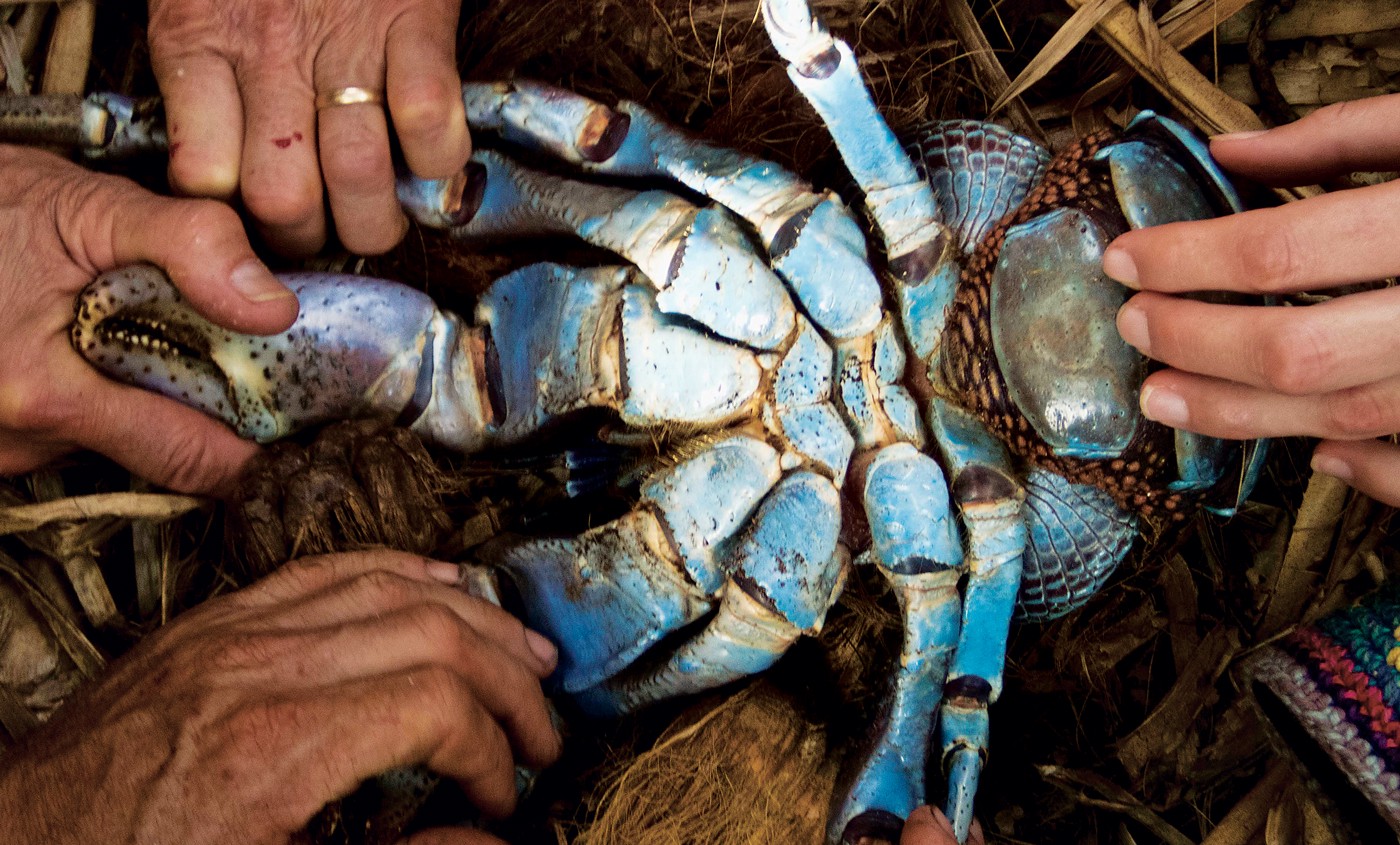 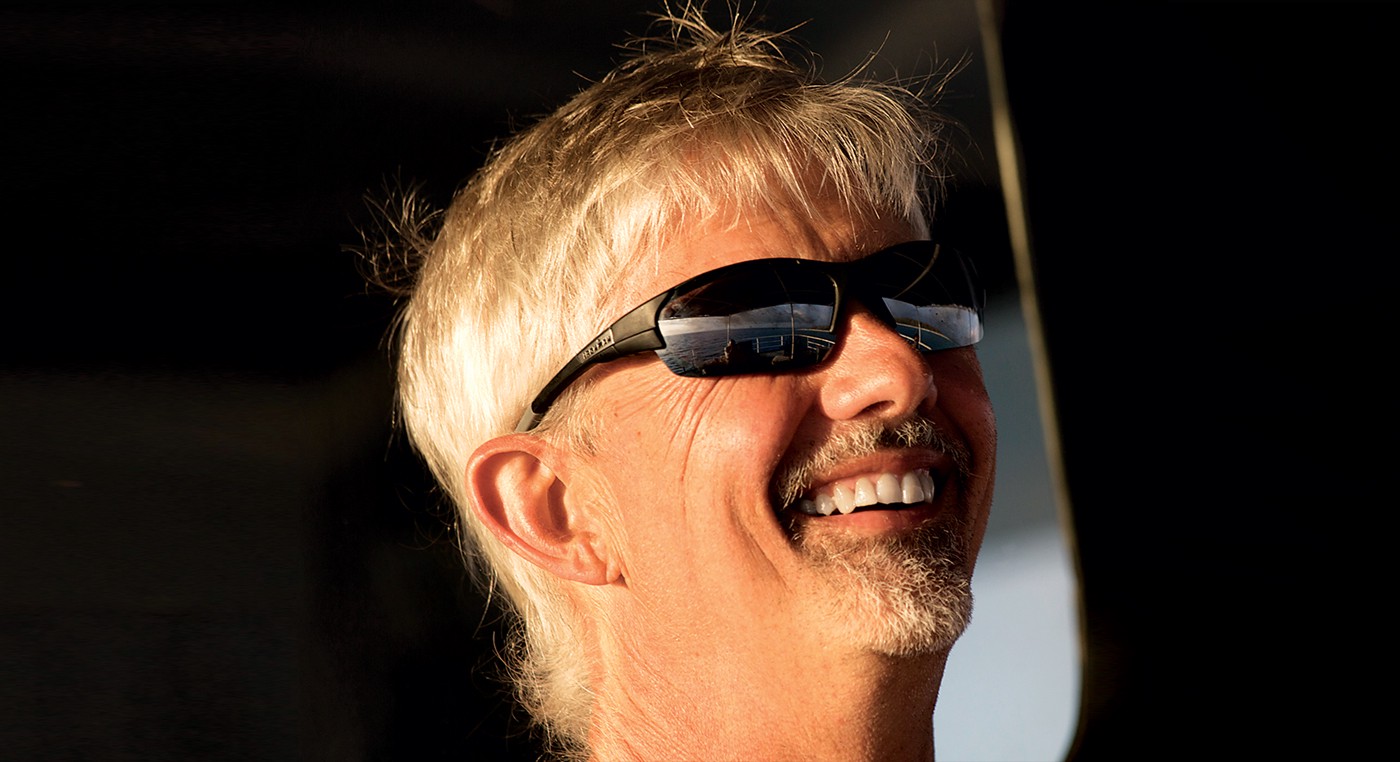 EVOLVING ECOSYSTEM: Palumbi (above) and his research team will compare the genomes of coconut crabs and corals from Bikini Atoll with those from American Samoa to see what decades of radioactivity have wrought. (Photos: Dan Griffin)

It’s a promise that remains unfulfilled today. Normal life on the atoll is impossible, because the groundwater is contaminated. No one lives there apart from a half-dozen custodians who tend a small ghost village. All food and water must be imported.

“One of the guys working on the boat we were living on was of Bikinian descent,” López says. “Talking to him put in perspective what his family went through and how weird it is now to make a living off bringing scientists and tourists to the islands when his own family can’t live there.”

And despite Bikini’s remove, the rest of the world wasn’t beyond the reach of the blasts, which is how Palumbi grew interested in the atoll. The explosions — along with similar tests by other nations — caused a spike in atmospheric levels of carbon 14, a radioactive isotope that’s naturally created by cosmic rays interacting with nitrogen. Like other forms of carbon, C-14 is readily absorbed by plants and, in turn, animals.

“Every human on Earth had twice as much radioactive C-14 after those tests as before,” Palumbi says.

The “bomb pulse” isn’t harmful, but it is traceable, leaving an indelible mark on cells that scientists have learned to harness to remarkable effect. Traditional carbon dating — measuring the half-life of C-14 — estimates when an organism died. Bomb pulse forensics, by contrast, reveal how long something has been alive. Because C-14 levels have been steadily dropping since the open-air nuclear tests ceased, scientists can look at a cell’s concentration of C-14, cross-check it against the declining atmospheric levels of the isotope, and determine when the cell was born.

‘The terrible history of Bikini Atoll is an ironic setting for research that might help people live longer. By understanding how corals could have recolonized the radiation-filled bomb craters, maybe we can discover something new about keeping DNA intact.’

The method has been used for everything from measuring the age of ringless trees in the Amazon to examining whether humans generate new olfactory bulb neurons into adulthood. In Palumbi’s world, it helped establish that many creatures in the deep sea are far older than previously thought. “All of a sudden beluga whales live twice as long because we realized we had gotten the calibration wrong,” says Palumbi, who grew fascinated with the technique while writing his 2014 popular-science book, The Extreme Life of the Sea.

Palumbi’s varied career has focused on the genetics and evolution of a range of marine animals, from whales to shrimp. He’s also had a longtime interest in how the ocean fights back against human-made disasters. His book The Death and Life of Monterey Bay details that body of water’s recovery from a century of abuse.

But the idea of explosions capable of putting radiocarbon into every person, plant and animal on Earth made vivid to him a whole new level of destruction. When the producers of Big Pacific invited him to choose an expedition for use in the documentary, he knew exactly where he wanted to go.

“I’ve been talking to people to get to Bikini for years and years,” he says. “I thought it would be a good lesson in what the ocean is capable of in terms of recovery. How does it grow back from this most devastating thing ever done?”

Having previously done research on American Samoa and other Pacific islands and atolls, Palumbi was at once on familiar terrain in Bikini and aware of its pervasive oddity. The atoll is still littered with parts from exploded planes and ships. At one point, the expedition crew found a 100-foot-long steel chain, suitable for mooring huge ships, lying on a beach, as if it had washed up — and yet no wave on Earth could have moved it. Even the palm trees on Bikini’s main islands were off.

Planted in the ’60s as part of the atoll’s recovery, they stand in mechanically precise rows with the exactness of soldiers in formation, totally unlike the randomness of trees on a normal Pacific atoll. “There’s a grid of them in every direction, so you know you’re in a very, very strange landscape,” Palumbi says.

The islands are safe to visit so long as outside food and water are consumed. Nevertheless, Palumbi — whose team included daughter Lauren Palumbi, ’10 — kept a radiation dosimeter on his belt to appease his wife. Typically, readings showed normal background radiation levels; at one point, the group encountered a level similar to what airline passengers experience at 35,000 feet.

Planted in the ’60s as part of the atoll’s recovery, they stand in mechanically precise rows with the exactness of soldiers in formation, totally unlike the randomness of trees on a normal Pacific atoll.

Dan Griffin, a photographer on the trip, said the serenity of the place could be lulling. Fish, birds and other animals, unaccustomed to human presence, were fearless and hardly reacted to the visitors, he says. To remind themselves of the more ominous side of paradise, they had a phrase they’d bandy about: “The coconuts are radioactive.”

Indeed, some of the highest radioactive readings came from the coconuts, whose trees concentrate the radiation in the soil and groundwater. That in turn raises questions about another of the atoll’s denizens — the platter-sized coconut crab, which feasts on the fruit.

On other islands, the crabs are a highly sought delicacy, with full-sized adults rarely seen in the daytime. On Bikini, giant coconut crabs amble about with impunity.

Yet despite their radioactive diet, the crabs suffer no obvious ill effects. Palumbi and López are sequencing their genomes for comparison against samples from American Samoa and from Bikini before the nuclear testing began. “The question is, what is it doing to them?” Palumbi says. “We don’t have any idea. The way to get into the heart of it is to look at the DNA.”

It’s tempting to draw reassuring lessons from the atoll’s recovery. The research, López says, provides at least preliminary evidence that even if you destroy an ecosystem, it can heal with time — and with freedom from human interference. Ironically, Bikini reefs look better than those in many places she’s dived.

“It didn’t look like this nightmare-scape that you might expect,” she says. “And that’s still something that’s weird to process.”

For Palumbi, Bikini represents the ultimate example of the ocean fighting back. But he’d like his work there to remind people of the magnitude of what happened, not just assuage them that everything is all right. Many of his undergraduates, he says, have no idea the tests even took place.

“It’d be wrong of us to forget that we dropped 23 atomic bombs on a coral reef to see what would happen, displaced all those people and created scars on the planet that will never heal,” he says. “Can we please not forget what we did here?”

Artificial intelligence is remaking the news. Those who control it are reshaping society.