We Can Do This'

A Stanford junior launches a delicate offensive against the Taliban. 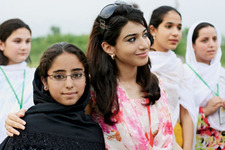 Amid the relative quiet challenges of Stanford, both academic and cultural, Shiza Shahid discovered a confidence and resourcefulness that made her want to take on the Taliban.

Her goal: rescue the educations of adolescent girls from the chaos and violence of Pakistan's Taliban-besieged Swat Valley.

Shahid, 20, mostly came of age in Islamabad, about 100 miles from the Swat Valley, which is in Pakistan's North-West Frontier Province. As a sophomore at Stanford last winter, she was horrified and outraged by news reports of the insurgents' attempts to eliminate all schooling for girls through violent intimidation. "I can't think of anything lower than that," she says.

In July, convinced that an offensive by the Pakistani military had succeeded in dampening the Taliban's day-to-day abuses and influence, Shahid launched a quiet initiative that was wildly beyond anything in her previous experience. Using the Internet and word-of-mouth recruitment through friends and acquaintances, she put together an international cadre of organizers. By mid-August, they had created a weeklong educational retreat in Islamabad for 26 girls from the Swat Valley.

Despite the scope of the effort, only modest fund-raising proved necessary. Families and a schoolmaster in the Swat Valley were enthusiastic about participating. Nevertheless, the project, named Shajar-e-Ilm (Tree of Knowledge), was pressure-filled, mostly because of the delicate decisions involved in trying to empower the girls without drawing undue attention to them.

Inevitably, the girls would become a vanguard for change upon returning home. Some danger would unavoidably follow from that, but Shahid didn't want the girls put in a limelight that exposed them to any extra threat. Media coverage, for instance, was discouraged until the end of the retreat. The trick was to balance prudence with inspiration—no small task amid such pervasive peril.

Ultimately, Shahid considered that a challenge to embrace rather than a drawback. Nothing was more fundamental in her message to the girls than the idea that they could flourish even in the face of daunting obstacles and risk.

"Credit for that belief goes to what Stanford did for me," declares Shahid, who began her junior year working as a think-tank intern through the Stanford in Washington program. "When I came to Stanford, I got something I didn't get before that—a great deal of encouragement for anything I wanted to do. Everyone made things seem so possible, so attainable."

The Stanford connection also made an impact through the participation of a newly minted alum, Nehel Khanani, '09, and Asfandyar Ali Mir, currently a sophomore economics major. Both were core members of the team at the retreat.

When the retreat got under way, Shahid and her co-organizers quickly realized they had underestimated the ordeal of living in the Swat Valley during waves of Taliban terror. Schools were burned, family members abducted and, in the worst cases, parents murdered. "The girls were far more traumatized than we had thought," notes Shahid. "They were like 30-year-old women inside."

In reality, they were 11 to 17, and activities at the retreat were immediately modified to emphasize some psychological relief. "We played a bunch of ice-breaker games that they really enjoyed, visited different sites in and around Islamabad, went to see a play, brought in a guitarist and even their favorite actors from the play—all these, I feel, offering trauma relief and creating a sense of closeness," noted Khanani by email from Karachi, where she now works at a free hospital.

Presentations and workshops featured political and social activists, artists, lawyers and military doctors. The girls got instruction in writing, speaking and critical thinking, all intended to affirm their right to pursue information and ideas for personal development as well as to foster an informed citizenry.

The Taliban's activities in the Swat Valley, said Ali Mir in an email, had transformed the girls into "individuals with no social power at all." He was shocked by the extent of the violence and cruelty the girls described, but the retreat made an impression powerful enough for the girls to believe "that they were created equals and were no less than anybody."

Shajar-e-Ilm remains an active project. Organizers stay in touch with the girls who attended the retreat through a big sister/little sister program of correspondence and phone calls, and a website links to a blog with posts from both mentors and girls. It's all part of a thoughtful balance.

"We wanted them to be able to combine the values of East and West, in a manner that would enable them to be leaders in their local communities while having access to the resources and knowledge in the rest of the world," says Shahid.

Reports from the girls and others, she adds, suggest that conditions in the Swat Valley have improved enough to think about offering more educational help in the region. She moved quickly from thinking to planning. At last check, she was organizing an end-of-year trip to the valley with some of her team members so they could assess the situation firsthand. "We can do this," she says.

Top of Their Game

In Tune With the Toxic