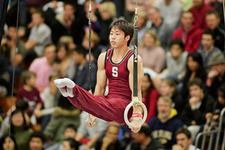 Gymnasts make the difficult look easy. But the most ambitious challenge in Sho Nakamori's life is testing him beyond anything he has attempted on the parallel bars or still rings. Transformed by his father's death, he is fiercely focused on making the most of every minute of every day.

"I've learned to take nothing for granted, to live today as if there's not going to be another one," says Nakamori, '08. He acknowledges how hard that is to always remember, how hard that is to truly achieve. "I know," he adds soberly, "but I try, I really try." 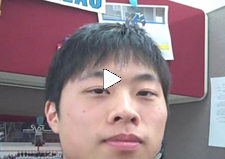 VIDEO: Sho Nakamori, one of the leaders on Stanford’s NCAA champion men’s gymnastics team, describes how his competitive spirit overwhelmed his logic.

This year brought something to savor: the NCAA championship for the Stanford men's gymnastics team. Nakamori was far more than one of the squad's leaders. He was a fifth-year senior who had watched the title slip away to Oklahoma in 2008 by a maddeningly slim margin of .45 of a point. April's triumph brought shared redemption for the team and was the culmination of Nakamori's journey from star-struck child to storybook star.

"It meant a lot because I grew up in this program," explains Nakamori, who trained as a youngster under his father, Kazuki Nakamori, who was then coaching Stanford's club team. The collegiate gymnasts nicknamed their young fan "Sho-Nuff" and he dreamed of following in their footsteps—and flips and vaults. "Just seeing those teams, they were like legends to me," says Nakamori, 23.

Getting there was excruciating. Not because of the physical toll—although that has been severe—but because of emotional desolation. The overwhelming influence in his development was Kazuki, who died suddenly at just 44 in 2004.

"My gymnastics was the biggest thing in his life," says Nakamori.

Amid his grief, Nakamori felt an intense sense of commitment to helping his mother and younger sister in every way he could. He headed to Stanford, where he would juggle academics with gymnastics competition that sometimes included representing the United States in international meets.

Stanford head coach Thom Glielmi got a dramatic sense of what Nakamori was made of in 2003. Glielmi was coaching at the Pan American Games in the Dominican Republic when Nakamori, a high schooler of elite standing, broke his left femur landing a vault. It was an ugly moment—the spot of the break looked like a second kneecap—and Glielmi knew the big question was whether the injury was career-ending. "We weren't sure," he recalls.

Nakamori's immediate reaction, driven either by adrenaline or shock, was to ask if he could keep competing in events that didn't depend on propulsion from his legs (still rings, for instance). "The trainer looked at me like he couldn't believe what the kid just asked," says Glielmi.

A flight to Miami was followed by surgery and then months of arduous recovery. After his father died, the question was whether Nakamori would be the same person competitively, physically and psychologically.

Despite ups and downs—including a shoulder problem that cost him the 2007 season—the answers have become clear. Nakamori was the winner on the parallel bars during the NCAA team finals. He also tied for fourth in floor exercise and tied for sixth on horizontal bar as Stanford beat Michigan for the title by 1.3 points. "Huge" is Nakamori's simple word for the team's sense of accomplishment.