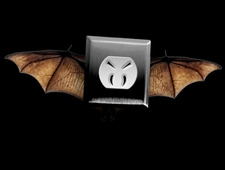 Q: Regarding small, rechargeable appliances—such as cell phones, toothbrushes, cameras, etc: How much energy is consumed when the unit remains plugged into its charger after it has completed charging to 100-percent capacity? Also, does the charger (with no unit attached) consume energy if it remains plugged into the wall outlet?

Believe it or not, there are vampires lurking in your house at this very moment. Not the bloodthirsty sort from Twilight, but energy vampires: appliances that silently suck electricity from your wall outlets and discreetly inflate your power bill. The small rechargeable appliances you mention are all guilty of wasting watts, as are other common household electronics like computers, televisions and microwaves. Even when turned off or in standby mode, these energy vampires continue to feed on the lifeblood of your electricity. What's to be done?

For starters, rest assured that you're alone in neither victimhood nor curiosity—the very first SAGE column tackled a question about the energy use of computers in standby mode. Beyond computers, vampire energy consumption can be traced back to a bewildering number of sources, many of which we've just mentioned. Since you're asking about two specific instances, I'll address those first and then broaden the discussion in the Nitty Gritty.

You first ask about the energy consumption of a device left plugged in after it has been fully charged. You could walk around your house with a wattmeter to investigate your fully powered appliances, but luckily the Lawrence Berkeley National Laboratory has already done just that for you. Their Standby Power Summary Table shows that almost all the electronics we use consume electricity even when off or idle, and even when fully charged. A fully charged cell phone plugged into the wall is consuming about 2.24 watts, or 60 percent of the power it consumed while charging. Even worse is a charged laptop that's still plugged in, which consumes 29.48 watts, 66 percent of the 44.28 watts consumed while charging. If you left it plugged in all year, it would consume as much electricity as running your coffeemaker for 12 days straight. (Now are you wondering whether or not you should work with it plugged in? That's a whole other question, and a surprisingly complicated one. The short answer is that plugged in is probably better, but there's a full discussion here.)

Leaving an empty charger plugged in has a similar effect. Clasp your hands around one that's been plugged in for a while. Feel the heat? That's wasted electricity—technically, it's called "no load mode," but in reality it's just another vampire. According to the Berkeley Lab's testing, cell phone chargers in no load mode consume around 0.26 watts, and laptop chargers, 4.42 watts. These numbers by themselves constitute a trickle, but when multiplied by the dozens of idle or "off" devices in millions of American households, these sneaky energy vampires are responsible for an estimated 10 percent of residential energy use. That equates to at least $4 billion paid for wasted energy every year: who knew a vampire bite could be so expensive?

Vampire energy in annual energy use and cost. (Image: GOOD)

Fortunately, energy vampires are easier to defeat than the mythological sort. All you have to do is unplug your empty chargers, after all. But let's be real—I'm as guilty as anyone of not always unplugging unused "wall wart" chargers.

While forgetful folks like me work on making unplugging a habit, there are ways you can make it easier. If you plug your devices into a power strip, you can cut off power to all of them in one fell swoop (of your finger). You can eliminate even that step by buying a smart power strip, which stops drawing power when plugged-in devices are switched off. What's more, there are even smarter chargers—including AT&T's ZERO Charger and Apple's battery charger—that only draw power when a device or battery is attached. These vampire killers cost more than their traditional counterparts and are sold separately from the devices they charge, but will hopefully become the norm in the near future.

Just unplugging our chargers won't save the world, but it's an simple step in the right direction. Do your part to slay the energy vampires in your life and both the environment and your wallet will thank you.

Hey Kids, It's How to Do It Time

An American Soprano in London

Eau Stanford, Where Art Thou?