A veteran pursues a mechanical fix for combat-related brain injuries and PTSD.

Growing up in Texas in the 1990s, Russell Toll was an idealistic teen with natural leadership qualities. He admired the military careers of Gen. Douglas MacArthur and President Dwight Eisenhower and dreamed of fighting for the good of the world. He was accepted into the U.S. Military Academy’s Class of 2005, and just as he completed basic training, the 9/11 attacks happened.

Looking back, Toll, MS ’12, says his youthful “naïveté and idealism,” in conjunction with the timing of the most significant act of terrorism on mainland American soil, created a “gravity well of fate” that propelled him to the battlegrounds of Iraq. A platoon leader at 24, Toll found himself responsible for decisions that would determine the life and death not only of his own men, but also of the Iraqis they encountered in cities and remote villages.

His unit, 1-12 CAV of the 1st Cavalry Division, was deployed from October 4, 2006, to December 5, 2007, in the Diyala Valley—otherwise known as the Iron Triangle, or the Triangle of Death. His battalion faced massive improvised explosive devices and “turret poppers” that could slice a tank in half. “We had 16 tanks to start—72-ton indestructible battle tanks—and we only came back with four,” Toll says. His own tanks were hit four times, and at one point he was medically evacuated. Although Toll was eligible to apply for a Purple Heart, he says he couldn’t bear the thought of wearing that medal when he had survived, limbs intact, when so many men had not.

“When one of my privates asked me, ‘What the hell are we doing?’ I didn’t even tap-dance around it. I just told him, ‘I don’t know,’ ” Toll recalls. By that point, his mission had changed: He just wanted to get everyone home. While the men in his platoon survived, the battalion lost 28 members, with 132 severely wounded. Traumatic events day after day, week after week, became the norm for Toll. His idealism slipped away, but his dedication to his fellow soldiers, whom he describes as “the greatest band of characters ever,” deepened. “The one beautiful thing about that dark canvas is that we were all absolutely equal, and in there together for each other,” he says.

These days, Toll can be found in a quiet corner office at one of the Etkin neuroscience labs at Stanford. On his computer screen, a map of the human brain shows the trajectories of a complicated network of neon green lines. As a PhD candidate studying under Amit Etkin, an assistant professor of psychiatry and behavioral science, Toll is more than halfway through a five-year study of 1,500 veterans from the wars in Iraq and Afghanistan. The goal: to identify biomarkers in the brain—for example, a degree of electrical activity—that indicate the presence or severity of traumatic brain injuries,  post-traumatic stress disorder or depression and can help doctors to better diagnose and treat them.

The Department of Veterans Affairs estimates PTSD rates for veterans of the Iraq and Afghanistan wars are between 10 percent and 18 percent. Over time, those rates could reach 35 percent, according to an analysis co-authored by Stanford management science professor Lawrence Wein, MS ’80, MS ’85, PhD ’88. The suicide rate among these veterans is estimated to be between 41 percent and 61 percent higher than that of the general U.S. population, according to findings published in the February 2015 Annals of Epidemiology. Toll says participants in his study have often tried other treatments without success. “PTSD can look like a guy with a Silver Heart for valor who now can barely function,” he says.

Brains operate through a system of networks that work together like gears in the transmission of a car. One of these, the default mode network, guides us when we are sitting around, maybe daydreaming. When something captures our attention, the salience network engages; that’s the part of the brain that prepares us for action. In the case of PTSD, Toll explains, the salience network is a bully, and everything becomes important: the car backfiring, the person waving. 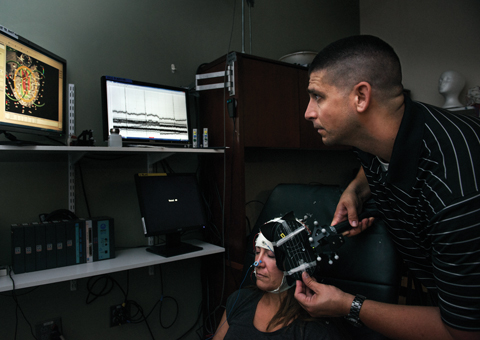 Toll and his colleagues want to be able to identify malfunctioning circuits in a patient’s brain scan as accurately as an orthopedist identifies a broken femur from an X-ray. From there, they’re focused on repairing the troubled circuits through a process called Transcranial Magnetic Stimulation, which uses pulses from a magnetic coil to activate critical points in the brain and, as Toll says, “tame the bully.”

The overarching aims of the Etkin Lab are to understand the neural basis of emotional disorders such as anxiety, depression and PTSD, and to develop novel treatments for them. Brain research has long focused on chemical imbalances, but in a new era of increased funding for the treatment of mental illness through neuromodulation, scientists like Toll are part of an international vanguard working to fine-tune the repair of neural circuitry and improve transcranial and deep-tissue stimulation techniques.

On his second tour of duty, Toll was assigned one of the least desirable positions. As a married officer, he was chosen to stay in the United States and serve as a rear detachment commander, a difficult assignment that became the next significant plot twist that would determine the course of his life and his future vocation. His first priority in the role, and the job that he hated most, was “door knocker”—telling the family when a soldier had died in the line of duty.

The second priority was to take care of the wounded, which meant he spent a lot of time checking on burn victims and amputees at Walter Reed and Brooke Army Medical Centers. “While I was spending all this time at Walter Reed, I was looking around taking notes, and I realized a lot of the equipment and technology and the diagnostics in use were from the Vietnam era and pretty barbaric,” Toll says.

He believed he could improve things. That’s when he applied to graduate schools and was accepted at Stanford. In 2012, the same year President Obama signed an executive order to improve mental health care for veterans and their families, Toll earned a master’s degree in bioengineering at the Farm. He was awarded a National Science Foundation grant that same year and, in 2013, became the co-protocol director of the Steven and Alexandra Cohen Veterans Center for the Study of Post-Traumatic Stress and Traumatic Brain Injury, a collaboration between the NYU Langone Medical Center and Etkin’s lab. “Russ was referred to me by a colleague, and we connected immediately,” Etkin says. “With his goals in science, his technical and engineering skill, combined with his determination to help veterans, he is a perfect fit for our lab.”

The journey from the battlefields of Iraq to the study of systems biology at Stanford has, at certain junctures, been daunting for Toll. “I think about the few times I’ve been really scared: Sleeping in Sader City was one; having rockets fired at me was one; and stepping into the Stanford Bookstore was one,” he says. “Here I am going through the books, you know, Fourier Transform and Analysis—what does that mean? There was that free-fall feeling in the pit of my stomach.” According to Etkin, the research, and thus the lab atmosphere, is necessarily highly collaborative, and Toll thrives in this team-oriented setting. “Because of who Russ is, he and his work have received a lot of support from his colleagues,” Etkin says.

As a veteran, Toll says his motivation is derived from a history and a consciousness he carries with him every waking hour. “When you are in the military, you swear an oath that you will never surrender while you still have the means to resist,” he says. “We are also under oath to never leave a guy behind.” Toll sees his work as a fulfillment of his military mission.

Although his deepest motivation is to relieve the psychic suffering of fellow soldiers, he also hopes that his presence as a combat soldier enrolled in a STEM graduate program will encourage others to follow the same path. To that end, he has become highly involved with the Stanford 2 to 4 summer program, which allows vets enrolled in community college to study in an accelerated course at Stanford to increase their chance of admittance into an elite four-year institution.

Last February, in response to ongoing high suicide rates and with bipartisan support from Congress, President Obama signed the Clay Hunt Suicide Prevention for American Veterans Act to further improve access to mental health care for veterans. The stigma around PTSD, according to a 2010 UCSF study, plays a significant role in discouraging veterans from seeking treatment. Toll has seen this stigma at play in the stoic veteran community and hopes that his work will help remove that barrier to treatment. “A biomarker is something that is empirical and cannot be manipulated. If we are able to prove that this is a mechanical problem with a mechanical solution, that is easier for a guy to wrap his head around.”

Kirsten Jones Neff, ’88, is a freelance writer based in Novato, Calif.

VanDerveer adjusts her plan to align with players' strengths.

Education is one way to put defeat into retreat.

The Arts, Every Day