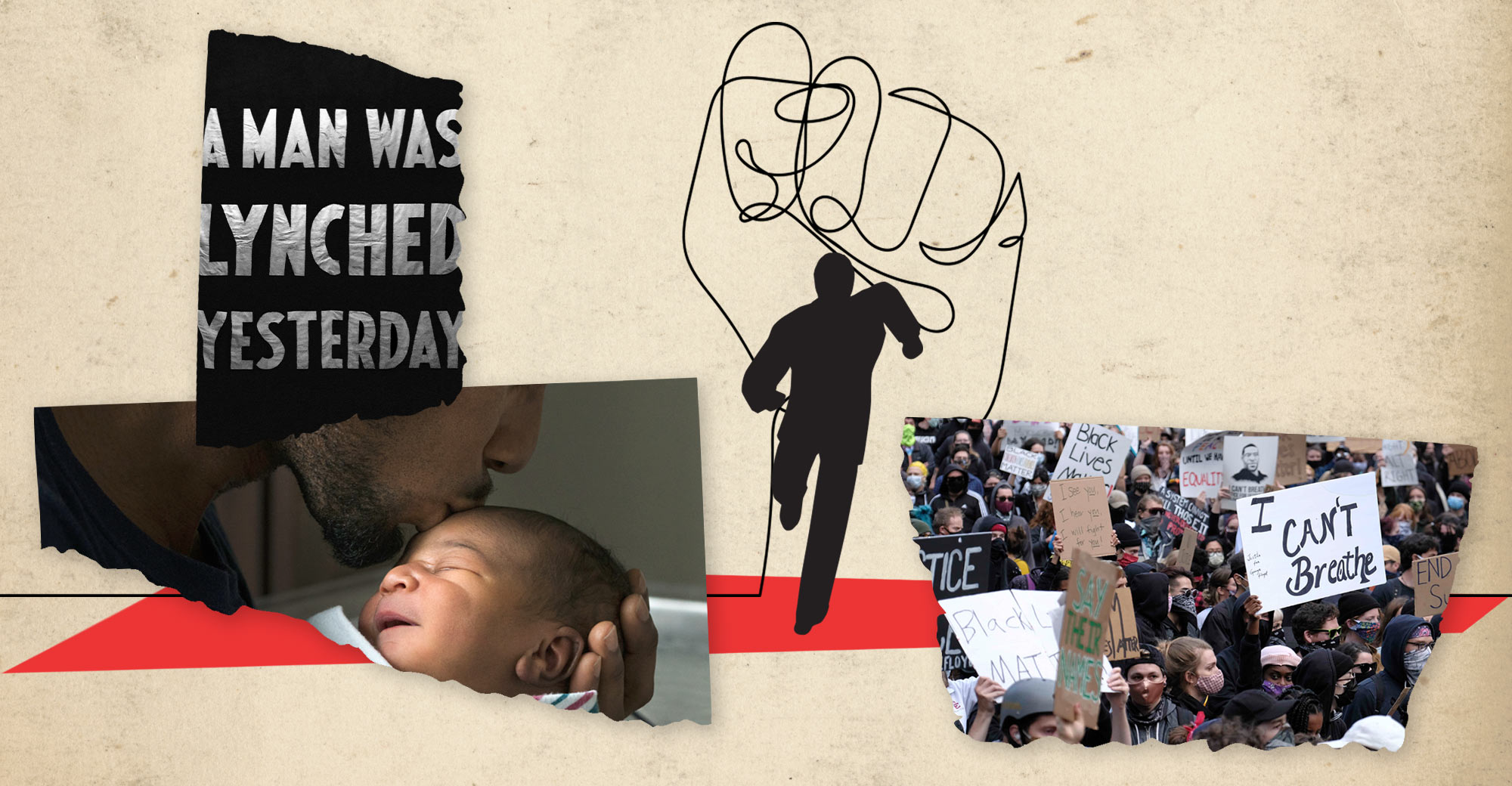 The first time I saw the bystander video of George Floyd, handcuffed, lying face down in the street, pleading for air as a Minneapolis police officer pressed a knee into his neck—for 8 minutes and 46 seconds—until he suffocated, a sense of horror overcame me. The televised shock of it all recalled the black-and-white flag flown from an upper-story window of the NAACP headquarters from 1920 to 1938 that broadcast five chilling words: “A MAN WAS LYNCHED YESTERDAY.”

That’s what I saw on May 26, on CBS This Morning with co-host Gayle King, in the middle of my breakfast: a lynching.

“I am really speechless by what we are seeing on television this morning,” said King, her voice cracking after two stories aired back-to-back: one with footage of Floyd’s death; the other of the racist incident in New York’s Central Park, in which a white woman called 911 to report an African American man threatening her life after a Black man who was bird-watching asked her to leash her dog. “It feels like it’s open season and there’s just not a safe place to be as a Black man in this country.”

Where can a Black man (Ahmaud Arbery), a Black woman (Breonna Taylor), a Black child (Tamir Rice) feel safe in America? That this is even a question speaks volumes about the systemic and generational dehumanization of Black lives in our society, a legacy of our country’s original sin: slavery.

When you’re not counted as human, it’s easy to be killed like a dog in the street.

I don’t say this for dramatic effect.

The origin, perpetuation and human toll of racist ideas that permeate American culture and infect policies and institutions have been examined by scores of sociologists, historians, political scientists, cultural theorists, writers, artists and others. We can’t pretend we don’t know what ails us.

In her influential 1994 essay, scholar and novelist Sylvia Wynter dissects the societal consequences of the acronym NHI (no humans involved), which was used unofficially by some officers of the Los Angeles Police Department to classify their response to calls involving African Americans. Quoting science historian Stephen Jay Gould, Wynter notes that “systems of classification direct our thinking and order our behaviors.”

I, like too many Black men I know, have had the emasculating experience of being pulled over by police. In my case, twice in the span of four hours.

It’s no wonder that in 2015 artist Dread Scott felt compelled to unveil an updated version of the provocative NAACP flag: It read “A MAN WAS LYNCHED BY POLICE YESTERDAY.” This was after Walter Scott, an unarmed Black man, was fatally shot five times in the back while running from a police officer in South Carolina.

In a 2016 interview with the arts publication Hyperallergic, Scott explained the message behind his work:

“During the Jim Crow era, Black people were terrorized by lynching—often public and publicized extralegal torture and murder of Black people. It was a threat that hung over all Black people who knew that for any reason or no reason whatsoever you could be killed and the killers would never be brought to justice. Now the police are playing the same role of terror that lynch mobs did at the turn of the century. It is a threat that hangs over all Black people, that we can be killed by the police for no reason whatsoever—for a traffic stop, for selling CDs, for selling cigarettes. Shot to death, choked to death, tasered to death, driven to death. Standing still, fleeing. Shot in the chest, shot in the back. Hands up, hands down. Point-blank range or at a distance. And the police never face justice for their crimes. It is a vivid concentration of the complete illegitimacy of this whole system.”

A Leading Cause of Death

A study published last year in the Proceedings of the National Academy of Sciences revealed that Black men are more than twice as likely as their white peers to die from police use of force. In fact, police use of force is a leading cause of death for men of color age 25 to 29. The study urged community leaders and elected officials to treat police violence as a public health issue.

At times, the exhausting weight of it all leads me to wonder if the only Black man that can survive an encounter with police is Luke Cage, the Marvel Comics superhero, given his two traits: superhuman strength and bulletproof skin.

I, like too many Black men I know, have had the emasculating experience of being pulled over by police. In my case, twice in the span of four hours—once, as two friends and I searched for a place to get ice cream before heading to a late-night screening of a movie, and again after the movie, on our way home. This was in the 1990s in a tony Los Angeles neighborhood. We (three young Black men in our 20s) were stopped while driving in a used car for looking “suspicious,” one of the officers said.

It made little difference who I was (a college student at the time, wearing a baseball cap emblazoned with the word STANFORD across it); what mattered was what I represented—another NHI.

There’s a particular strain of dehumanization that occurs when you’re spread-eagled against a police cruiser, patted down and asked if you have any drugs or weapons on your person (this was during the second stop). To stand your ground in a situation like this, to assert that you’ve done nothing wrong to deserve this harassment, is to risk your life. Your goal is simply to survive through compliance.

During the car ride home, my friends and I fumed with rage. But at least we lived.

In the wake of Floyd’s murder at the age of 46, a clip from Chris Rock’s 2018 comedy special went viral for how close his take on police brutality cuts to the bone:

“Whenever the cops gun down an innocent Black man, they always say the same thing: ‘Well, it’s not most cops. It’s just a few bad apples. It’s just a few bad apples.’ Bad apple? That’s a lovely name for murderer. How’d they get that one? Bad apple—that almost sounds nice. I’ve had a bad apple. It was tart, but it didn’t choke me out. Here’s the thing. Here’s the thing. I know it’s hard being a cop. I know that shit’s dangerous. I know it is, OK? But some jobs can’t have bad apples. Some jobs, everybody gotta be good. Like . . . pilots. Y’know, American Airlines can’t be like, ‘Most of our pilots like to land. We just got a few bad apples that like to crash into mountains. Please bear with us.’”

Sometimes you gotta laugh to keep from crying.

I’ve been heartened by the sheer number of nationwide protests demanding justice for George Floyd and the international expressions of solidarity from demonstrators as far-flung as Latin America, Europe, the Middle East and Africa. To see people from all walks of life, faiths and geographies come together, risking their lives during the coronavirus pandemic to stand against the pandemic of racism, shows that the world is on fire for justice.

This past Father’s Day, I thought of the Black fathers, wrongly killed like Floyd, whose names did not become hashtags, who were not here to receive heartfelt cards, gifts, hugs and kisses from their children.

For me, the U.S. protests triggered flashbacks of the 1992 Los Angeles uprising that erupted after a jury found four police officers not guilty in the arrest and beating of Rodney King. I was a high school senior with a 40-minute school bus ride from the San Fernando Valley to South-Central Los Angeles. I recall barely making it home before dark, when looting and violence erupted and parts of my neighborhood went up in flames.

I condemn acts of destruction, but, as Martin Luther King Jr. observed in a 1967 speech at Stanford University, “as long as America postpones justice, we stand in the position of having these recurrences of violence and riots over and over again. Social justice and progress are the absolute guarantors of riot prevention.”

This past Father’s Day, I thought of the Black fathers, wrongly killed like Floyd, whose names did not become hashtags, who were not here to receive heartfelt cards, gifts, hugs and kisses from their children.

I thought of the striking illustrated portrait of Floyd from @bloodmilk on Instagram. The caption reads: “George Floyd, father of two, from Houston, Texas. Called Big Floyd & Gentle Giant by his friends, loved by all who knew him.”

But mostly I thought of his 6-year-old daughter, Gianna, just two months older than my own, who during a segment on ABC World News Tonight innocently declared, “Daddy changed the world.”

In the days ahead, I pray we can transform our collective trauma and anguish into the actions necessary to make Gianna’s words true.

Johnathon E. Briggs, ’96, is a Los Angeles native who blogs at FatherhoodAtForty.net.

A Note to the Dumb

On George Floyd’s killing and racial injustice in America.