I am a Black woman in America. A Black American. An American.

When the latest round of police killings hit the news cycle, I made the decision not to engage, for the weight of that burden could drag me down.

Two weeks prior, while talking to a friend, I’d choked through tears: “I don’t want to be here anymore. I just don’t want to be here.” Here being stuck in my apartment, but more painfully, stuck in America. I’d allowed my emotions to engage in the pain of Ahmaud Arbery’s story. I didn’t have space for it. “Not today, Satan,” I’d opined. “Not this week, ’Murica.”

And yet I am far too educated, aware, culturally connected and proud to be Black to truly tune out. 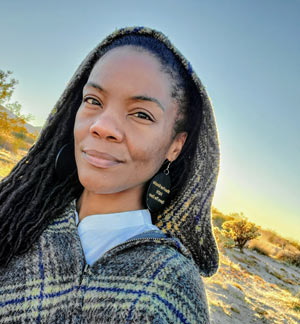 In times like these, my emotions sprint across a landscape of possibilities in one breath: Sadness. Fear. Hopelessness. Anger. Exhaustion. Apathy. Idealism. Hope. Realism. Disappointment. Solitude. Settling back on sadness.

Never disbelief because I know the history of this country. I have lived the history of this country. My parents have lived it. Grandparents. Great-grandparents. Multigenerational stories and experiences of bias and inequality. Multigenerational traumas. I see it more clearly now than ever before, and it wounds deeply like a knife, noose, bullet and now knee to the neck.

At work I held space for the only other Black person on my team. She shared that she feared this would be just another news story and that she’s becoming desensitized to it all. “Yeah,” I said with the same flat affect as when I leave water boiling too long for tea. It has become so commonplace: Another Black person killed by cops (or vigilante law enforcement); what’s for dinner?

We are all responsible for shaping a society that reflects our highest ideals.

But unlike after other police homicides, I started getting texts and messages from friends “checking in.” Kindness. Love. Sympathy, I suppose, from . . . allies. I hate that word’s application in a time like this. Ally implies lending support and service to a cause outside of one’s sense of self. This is not about allyship. This is about our humanity. Are you human, or are you heartless? Seems simple.

I still haven’t watched George Floyd’s murder, nor will I ever after having it described to me. My response to friends was “I’m fine” or “I’m OK.” That translated to: “I’m not OK, but I’m not in depths of despair or anger.” I am affected, but not helpless. I am tired, but not broken. I am aware, but not incensed. I would like to opt out, but opting out isn’t an option. I exist in “fine.” Yet, it’d be so lovely if every couple of months joy wasn’t stolen from my life because of anti-Black behavior in American institutions.

I challenge others to look inside themselves and ask: “Do I believe people should be systematically targeted, discriminated against, miseducated, unemployed, face hiring biases, lack proper health care and/or murdered simply because they were born with brown skin?” Actively feel what these events stir up, then close your eyes and imagine your kids (or other small children in your life) feeling the same in 20 years. Because without social and political pressure for change, the powder keg will explode again and again.

It’s time for everyone who has benefited off the backs of our struggle to collectively tap in.

We are all responsible for shaping a society that reflects our highest ideals. I hope those ideals aren’t staying comfortable with systemic racism and institutions that criminalize or penalize people because of the color of their skin. As Martin Luther King Jr. wrote: “We are caught in an inescapable network of mutuality, tied in a single garment of destiny. Whatever affects one directly, affects all indirectly.” Black folks have long held this country’s feet (and morality) to the fire, and the proverbial “we” are exhausted. It’s time for everyone who has benefited off the backs of our struggle to collectively tap in.

I applaud protesters, especially the youth. Street protests aren’t my thing, but I can donate and write. I can connect with others on some mind, body and spiritual goodness to ground our emotions during this tumultuous time. We can breathe together. Breathing circles are my thing. We can breathe for Floyd.

I am a Black woman in America. A Black American. An American.

All I want to do is be—and breathe.

Dionne D. Hill, ’01, is a travel enthusiast, business executive and transformation coach based in Los Angeles. She leads guided meditations and advocates radical self-care in challenging times. Email her at stanford.magazine@stanford.edu.

A Note to the Dumb

On George Floyd’s killing and racial injustice in America.