The Trouble With Tomatoes

A scientist helps pinpoint the mutation that robbed tomatoes of their flavor. 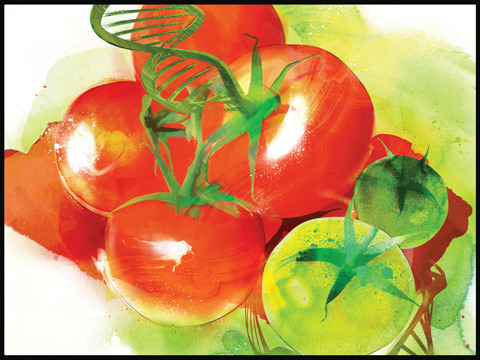 As a biochemist, Ann Powell has a scientist's high regard for the tomato. Easy to observe, closely related to other plants, and endowed with wide, well studied genetic variation, the tomato plant is the lab rat of the fruit-and-vegetable world, she says.

Not that Powell, a backyard gardener, is blind to its more sensual appeals. Her office at UC-Davis is replete with prints, pictures and plastic replicas of lush, ripe tomatoes—the kind that practically beg you to bite. Yet few people know better that such enticements are often a prelude to disappointment. Last year Powell, '71, whose career has focused on the role enzymes and proteins play in developing and ripening fruit, brought new understanding to an old lament: the tepid taste of the store-bought tomato.

The blandness of the commercial tomato has well documented roots. Often planted in poor soil, almost always picked prematurely, and frequently refrigerated on the way to market, the typical American slicing tomato is grown for gross and garnish rather than taste. But Powell and her collaborators discovered the problem lay deeper—in a genetic mutation whose insipid influence occurs no matter how pampered the fruit might be, a mutation originally embraced by tomato growers worldwide more than 70 years ago for a simple reason: It made beautiful fruit.

At the time, commercial tomatoes looked closer to today's heirlooms, their red skins marbled with dark green blotches. Then, through crossbreeding, growers began to develop a variation that ripened uniformly, going from light green to near white to brilliant red with the certainty of a lightbulb. Not only did the unblemished fruit fit consumers' aesthetic ideal, the solid colors provided a secondary benefit. Before ripening, the contrast of the pale green fruit against dark green leaves made it easier for farmers to gauge maturity, a crucial efficiency in large-scale farming.

But about 10 years ago, Powell stumbled on an observation that would cause her to give new attention to the consequences of the mutation. She was studying tomato plants that had been mixed with genes from a weed. To her surprise, some of the unripe fruit was as dark as cucumbers rather than the pale green of most maturing tomatoes. Powell was intrigued. The added genes had increased the production of chloroplasts—the engines of photosynthesis and the cause of the green color—in the fruit, while leaving levels in the leaves unchanged. 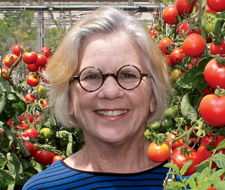 Powell's research into the matter intensified two years ago. Collaborating with scientists in Spain and at Cornell and Michigan State universities, she began to zero in on the genetic factors at play. Their work was simultaneously cutting-edge, relying on the recently completed tomato genome sequence, and arduously low-tech. Four days a week, Powell and an army of student volunteers would head into the Central Valley dawn to check the progress of thousands of genetically modified plants before bowing to the heat by about 11 a.m.

Eventually, they discovered that the mutation that promoted uniform ripening had also knocked out a gene needed for the full development of sugars in the fruit. By rescuing the missing gene—while retaining the uniform-ripening trait—the researchers were able to create tomatoes that matured from dark green to an even red with 20 percent more sugars and other compounds associated with flavor. Still, Powell can't make any direct claims about improved taste. Federal regulations prohibit sampling experimental produce.

While the potential for a sweeter, tastier tomato is tantalizing to many (news outlets from NPR to the New York Times to the BBC waxed wistful over the possibilities), whether Powell's work will actually end up in America's grocery aisles remains to be seen. Agriculture isn't pharmacology, where huge financial returns provide incentive for pushing advances, she points out, adding that the current system serves many farmers very well with the average consumer content with the affordable, plentiful fruit that's available.

In the meantime, you can always grow your own tomatoes, avoiding the other causes of tastelessness, like poor soil and premature picking. In that regard, Powell may not be the one to ask for advice—as a tomato grower, the painstaking scientist is a more laissez-faire hobbyist: "I just throw them out there in the garden and hope they survive."

They still munch at all hours, but meal time is tastier (and healthier) than ever.

Your Dish Is Their Command

Two dotcoms bring the personal chef to your table.