A century ago this month, workers put the final touches on the original Stanford Stadium, a 65,000-seat mammoth that was built in mere months by a rush of men, mules and machines. It wasn’t just the largest stadium on the West Coast. It was a statement, or as the Daily put it, “a tangible sign to the outward world that Stanford is a live and growing institution, that it is virile, and that Stanford men and women are doers as well as thinkers.”

By the stadium’s golden years, however, the giddy effervescence had gone flat, replaced by grumbles about the dearth of good sightlines, comfortable seats and sufficient bathrooms. (Especially the bathrooms.) Fans were still on the field after the last home game of 2005 when wrecking crews began making way for its newer, cozier, more amply toileted replacement.

But the heart of the old stadium remained. To reduce costs and buffer against earthquakes, engineers in 1921 built the huge berms that still cradle the modern facility. (The relocation of so much dirt is why Stanford baseball has a Sunken Diamond.) And to these berms, at least Stanford says happy 100!

A hundred years after the first white cane was used as a navigation tool for people with impaired vision, researchers at the Stanford Intelligent Systems Laboratory have an upgrade. The Augmented Cane helps walkers avoid obstacles and follow identified routes using tools developed for autonomous vehicles. Others have tried similar efforts, but until now the results were heavy and prohibitively expensive. The new prototype weighs 3 pounds and costs $400. It also sports cutting-edge sensors and can be built from off-the-shelf parts in combination with free, open-source software. In real-world tests with volunteers found through the Palo Alto Vista Center for the Blind and Visually Impaired, the Augmented Cane increased walking speeds by roughly 20 percent over standard canes.

Your word of the day is ampliganda.

Last July, Renée DiResta, technical research manager at the Stanford Internet Observatory, was in an online chat room for supporters of Sen. Bernie Sanders when a message appeared from an anonymous account. “It contained an image of Shahid Buttar, the San Francisco activist challenging House Speaker Nancy Pelosi in the 2020 congressional runoff, and offered explicit instructions for how to elevate the hashtag #PelosiMustGo to the nationwide Trending list on Twitter,” she writes in the Atlantic. Thus, DiResta had a front-row seat to the start of a phenomenon of modern politics—a coordinated social media barrage with apparently clear political purpose and murky provenance.

“We’ve long had a word for persuasive communication with an agenda: propaganda,” DiResta writes. But that word presumes the work of a powerful entity, such as a government, forcing ideas on people from the top down. “Far from being merely a target, the public has become an active participant in creating and selectively amplifying narratives that shape realities,” DiResta writes. “Perhaps the best word for this emergent bottom-up dynamic is one that doesn’t exist quite yet: ampliganda.”

It’s not just our lexicon that’s lagging. Our political and civic norms still haven’t caught up with this ability to summon the wrath of the online crowds. “Understanding the incentives of influencers, recognizing the very common rhetorical techniques that precipitate outrage, developing an awareness of how online crowds now participate in crystallizing public opinion—that is an education that Americans need,” DiResta writes. Until then, she says, we must all become more aware of what we choose to amplify and how we choose to participate. 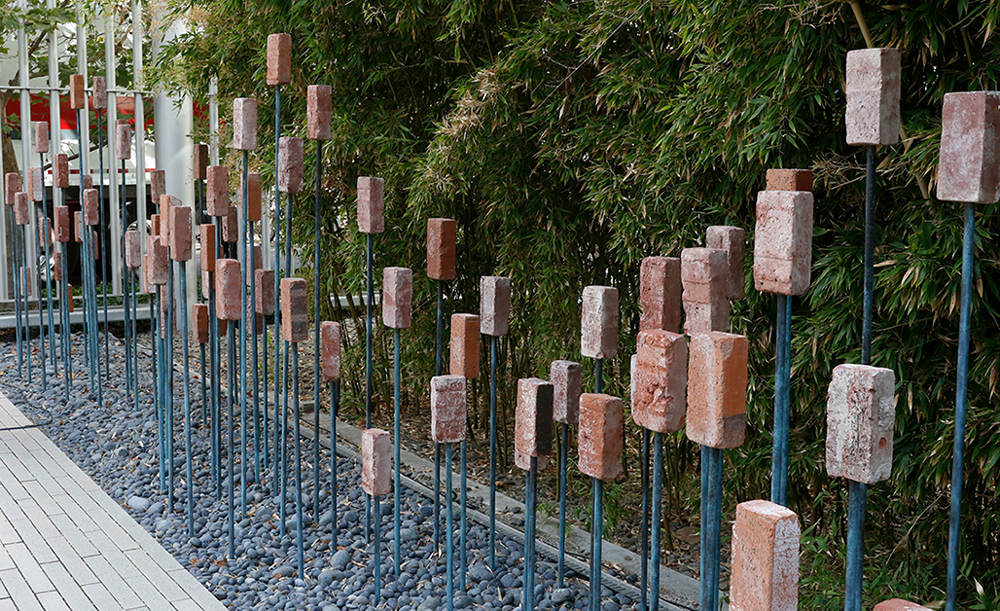 Earlier this month, Renewal, a sculpture honoring people who have donated their bodies to Stanford medical education, was dedicated near the clinical anatomy labs in the Center for Clinical Science Research. Its 77 bricks came from the old anatomy building on campus, where Donald Prolo, an emeritus adjunct professor of neurosurgery, salvaged them in 2012. Art and art history lecturer Lauren Toomer, MFA ’15, later fashioned them into a sculpture. Its undulating form reflects the readout of a heartbeat on a monitor. “The bricks were reborn, just as donors provide students with a new generation of knowledge,” Toomer says. “The title Renewal honors that.”

Casey Martin, ’95, went farther on his right leg than anyone could have imagined. Born without the main vein that returns blood from the lower leg to the heart, Martin, who was profiled in Stanford in 1998, grew up in constant agony, blood pooling in his leg’s smaller veins and into his knee. By day his leg was squeezed into a compression sock; by night it was elevated on five pillows. Activity only made the pain worse.

Still, he became a collegiate champion golfer, even as he struggled to walk the courses. In 1994, he captained Stanford to a NCAA championship victory; the following year, they were back in the finals. Perhaps his most significant victory, however, came seven years later before the U.S. Supreme Court, when he successfully prevailed in his lawsuit against the PGA Tour for the right to use a golf cart under the Americans with Disabilities Act.

Since his pro days, Martin has coached the sport in kind, leading the Oregon Ducks to the 2016 NCAA championship. But his leg continued to ail him. In 2020, he broke it stepping off a curb. His tibia never healed. On October 15, doctors at the Mayo Clinic in Minnesota amputated the limb, a date with destiny Martin had long tried to forestall but had recently come to accept. “[The doctors] were able to save as much of the bone above the knee as they had hoped. This should give him a good shot at a prosthesis that will be effective,” his brother Cameron told the Bleacher Report.

The news brought out a round of praise for Martin, even from those who once opposed his fight to use a cart as unsporting. In Sports Illustrated, golf journalist Mike Purkey looked back on his assertions that walking was fundamental to the competitive game and that using a cart provided an advantage, even for Martin: “Over a long career, there aren’t many things I wish I hadn’t written but this is one.”

Current treatments for Parkinson’s disease go one of two routes: drugs or deep brain stimulation. Both can be expensive and cause serious side effects. When they work (and they don’t always), benefits may wane over time. But a new treatment—the brainchild of Stanford Medicine researcher Peter Tass—has raised hopes of major benefits. A recent study of a small group of patients found that wearing a vibrating glove for two hours twice a day alleviated the tremor, stiffness and balance problems associated with Parkinson’s. Patients also reported the glove alleviated mood swings, behavior changes, depression, and the loss of smell and taste. “It seemed like magic,” says Stanford neurobiologist Bill Newsome, recalling the first time he saw videos showing Parkinson’s patients before and after using the glove. “But Tass’s modeling studies suggest a plausible mechanism whereby fingertip stimulation could alter abnormally synchronous activity in the central nervous system.”

The idea has historic antecedents. In the 19th century, neurologist Jean-Martin Charcot created a vibrating chair after learning that his patients’ symptoms improved after long, jostling carriage and horseback rides, though the results of his creation were ultimately inconclusive. Tass is working with an industry partner to gain U.S. FDA clearance for the treatment, which he hopes to have by summer 2023. The latest issue of Stanford Medicine magazine covers this and other ways researchers are working to prevent or reverse ailments in the brain.

’Tis the season to be scary, a perfect time to ponder everything you don’t know about the Stanford Mausoleum.

Reunited and it feels so good. Thousands of alumni and guests returned to campus last weekend for their reunions after a one-year postponement.

The Golden State represents 43 percent of electric vehicle sales despite having only 12 percent of the population, writes economist Lee Ohanian, a senior fellow at the Hoover Institution. That’s in part due to generous subsidies and other state policies favoring electric vehicle manufacturers. And yet, Tesla CEO Elon Musk is moving his company’s headquarters to Texas. “Despite California’s generous subsidies,” Ohanian writes, “Musk saw a future in California with declining profitability from business fundamentals and a state with policy makers who have a decided distaste for his lack of politically correct thinking.”

To better prepare kids for a world awash in data, a team led by Graduate School of Education professor Jo Boaler has created Big Ideas in Data Science, a proposed set of standards for teaching data science in kindergarten through 10th grade.

In 2012, former All-American track star and Athens Olympian Malindi Elmore, ’02, hung up her spikes. At least for a while. At 41, she qualified for the Tokyo Olympics in the marathon. In brutal conditions—with temperatures soaring to 104 degrees on the humidex—Elmore offered the world a reminder that age isn’t everything. She finished ninth in a race where 15 of the 88 runners failed to finish at all.

Nick Hakes hasn’t found many honky-tonks near Palo Alto. But the senior philosophy major has kept the heartland values he grew up with, including a reverence for military service. STANFORD caught up with Hakes, a volunteer and researcher at Stanford Hospital who plans to become a trauma surgeon in the Air Force after graduation.

The Wonder Years is back. Fred Savage, ’98, is executive producer (and director of the pilot episode) of a reboot of the show that made him famous. The new version is reimagined around a Black family living in Montgomery, Ala., in 1968.