If you needed a reason to help out with Thanksgiving cooking . . .

“If years have a dominant feeling (1929: despair; 2008: hope), 2021’s might be exhaustion,” Jamil Zaki, director of the Stanford Social Neuroscience Laboratory,  writes in the Atlantic. That exhaustion has contributed to a worldwide surge of attention to the idea of self-care, which emphasizes people centering their own needs amid so much upheaval.

But self-care alone won’t save us, Zaki says. Indeed, it can backfire. “Individuals wrongly predict that spending time, money, and energy on themselves will make them more fulfilled than spending those resources on others,” Zaki writes. “When they act on these illusions, ironically they can deepen languishing and loneliness.” Instead, we might do well to heed studies that show helping others can foster greater meaning, self-worth and connection in our own lives.

And so Zaki suggests “other care” as a complement to self-care. If you’re thinking, “Other care is what exhausted me in the first place,” Zaki says it comes down to how you think about it. “People report being more fulfilled on days when they helped others, but only when they felt connected to why they were doing what they were doing, and to the person they were helping,” he writes. “People are psychologically intertwined, such that helping others is a kindness to ourselves.”

Try to keep up.

In the past few months, the Korean television series Squid Game smashed online streaming records, the Oxford English Dictionary added 26 Korean words and an appearance of boy band BTS at the United Nations General Assembly went viral. All this from a nation slightly larger than the state of Indiana. If this seems sudden, you’re—how do we say this gently?—less hip than you used to be. Stanford’s Dafna Zur, associate professor of East Asian languages and cultures and director of Stanford’s Center for East Asian Studies, will catch you up. “Our students today know what took me years to figure out: Korea holds the key to economic, political and cultural puzzles today. And it is way cool.”

A new tool to fight depression.

Stanford Medicine researchers have found evidence of a quick and effective way to treat severe cases of depression using a new type of magnetic brain stimulation. In a small study, the treatment brought rapid remission to almost 80 percent of participants, including Tommy Van Brocklin, a 60-year-old man who has had depression since he was a teenager. Van Brocklin flew from his Tennessee home to Stanford to undergo the five-day procedure in September. “By the third day, everything started to kick in. And it just got better and better the next few days,” Brocklin told the tech blog Gizmodo. He says the benefits have persisted. “I just have a different outlook on the world and my life, in a positive way.”

Transcranial magnetic stimulation has been approved to treat depression for more than a decade to only modest results. The new method, dubbed Stanford neuromodulation therapy, tweaks the treatment by exposing patients’ brains to a higher rate of magnetic pulses administered over a shorter period of time with more specific targeting of individual neurocircuitry, as determined from MRI scans.

Patients who start taking medication for depression typically don’t experience any reduction of symptoms for a month. Because study participants typically felt better within days, researchers hope it can be used to treat patients in crisis. “The period right after hospitalization is when there’s the highest risk of suicide,” says Nolan Williams, an assistant professor of psychiatry and behavior sciences and the study’s senior author.

The groundwork of democracy. 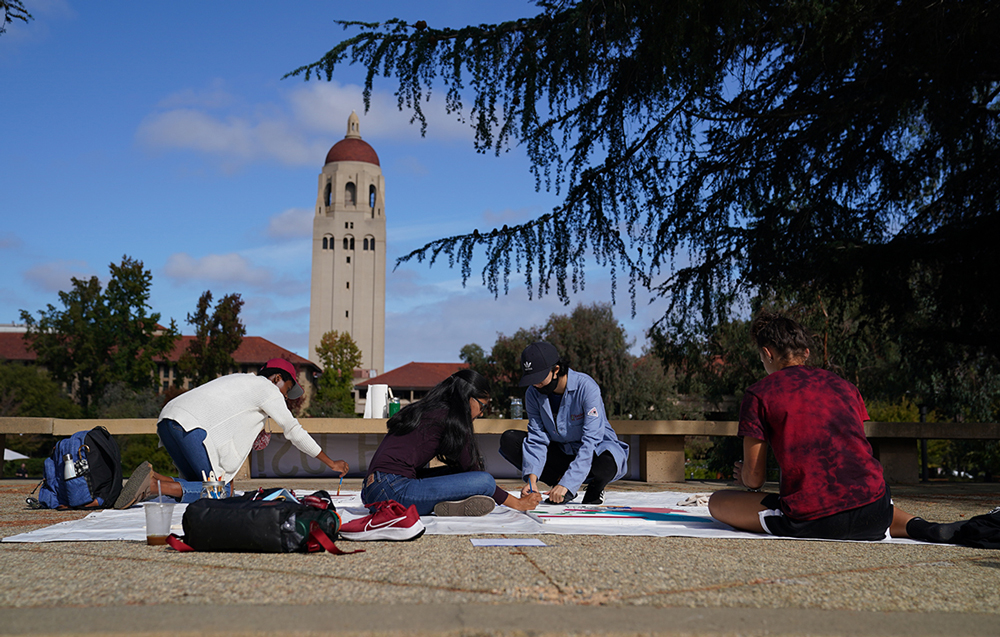 On November 2, Stanford canceled classes so that students, faculty and staff could participate in the university’s first Democracy Day. From panels to roundtable discussions to the democracy-themed mural shown in progress above, the day’s programming was designed to promote democratic participation, civic engagement and community building.

We generally expect technological development to move one way and one way only—forward. Preferably quickly. And yet nearly 20 years since the final flight of the Concorde airliner ended a quarter-century of supersonic passenger travel, nothing has taken its place. “It’s one of those few times that humankind, we actually regressed,” says Stanford professor of aeronautics and astronautics Juan Alonso. “We have fewer capabilities than we had before. We’re not used to that as a species.”

Norris Tie, MBA ’19, and Tim MacDonald, MA ’15, PhD ’20, aim to change that. After meeting at Stanford in 2017, the two founded Exosonic, a start-up working on a 70-seat commercial airliner designed to fly at 1.8 times the speed of sound and, more important, to do so with a relative hush. Supersonic overland travel is banned over much of the world because of its ear-splitting booms. (The Concorde could hit full throttle only over the emptiness of the Atlantic.) Exosonic hopes its designs will reduce sonic booms to sonic thumps, opening overland flights everywhere. There is a thicket of regulatory, financial, technological and environmental challenges to solve. But oh, just think: New York to Los Angeles in three hours.

On a recent Tuesday, six students huddled in a breakout room at the Graduate School of Business and confronted an imaginary life-or-death situation. They had just been stranded in the blazing Arizona desert, equipped only with 15 pieces of gear. Their task: Rank the importance of these items, ranging from a quart of water to a bottle of vodka.

One of them did exactly what you’d expect: created a spreadsheet. (The Loop would like to ask whether a working laptop was on the list, but maybe questions like that are why we weren’t suited for business school.)

Welcome to Desert Survival, a ritual for new GSB students, where the scenario is pretend but the pressure is real. “The vast majority of people know nothing about desert survival,” says Deborah Gruenfeld, a professor of organizational behavior. “It gives us a really nice opportunity to examine who’s having influence in these discussions and to look at why they’re having sway.”

Each student first came up with their own rankings of the items before reaching a consensus and final list within their team. Gruenfeld then revealed the ideal ranking as determined by an expert. The results fit a pattern she has seen many times: Most groups outperform their average individual member. Arguably, the most effective squad is not the one with the “best” score but the one with the greatest improvement between its individual and team performances. “If there’s a big difference there, then you know the team did something special,” Gruenfeld says.

Getting credit for creating fairy tea parties? Sign us up. Stanford’s Virtual People course is among the first and largest to be taught almost entirely in virtual reality.

In recent weeks, 44 Cal football players have tested positive for COVID-19, resulting in a rescheduled game against USC. But at press time, all players were expected to be ready for Big Game this Saturday. And now we know what the Band’s show will be about.

To fly or not to fly, that is the holiday question. The San Francisco Chronicle queried local experts, including professor of pediatrics and of epidemiology and population health Yvonne Maldonado, MD ’81. She is less worried about conditions on the flight than at the destination. Whether it’s OK to travel with young children “depends on where I’m going and how vaccinated the people I’m going to see are,” she said. Speaking of kids, Maldonado explores issues around COVID-19 and kids in this Tiny Lecture and in a Stanford Medicine Q&A.

The pandemic may have stopped Stanford women’s basketball from celebrating its 2021 NCAA championship in the usual fashion, but that’s OK by head coach Tara VanDerveer. “I’m not into a lot of the hoopla,” she told the San Francisco Chronicle. VanDerveer’s first two national championships came two years apart, and the youngest players on the 1990 title team were mentors and leaders as the 1992 title team won it all. That dynamic could again be in play this season, which just got underway. “They understand what it felt like to win,” VanDerveer said. “And they want that.”

Becoming friends with TV writer-producer Yvette Lee Bowser, ’87, comes with occasional peril: Anecdotes from your life may end up on-screen. “Just know your name will be changed to protect the guilty,” Bowser says in STANFORD.

At last week’s United Nations Climate Change Conference in Scotland, world leaders vowed to halt deforestation and slash emissions of methane, two big contributors to global warming, within a decade. Will it move the needle? Stanford experts weigh in.

“They have evolved these systems that allow them to be eating machines.” That’s to do with new research on whale feeding, not an observation of your Thanksgiving habits.