Faced with mounting budget deficits in the athletics program, the university announced on July 8 that it would permanently discontinue 11 varsity sports at the end of the 2020–21 academic year. In a letter describing the changes, Stanford president Marc Tessier-Lavigne, provost Persis Drell and director of athletics Bernard Muir acknowledged that the measure was “heartbreaking” but necessary, given that the pandemic has exacerbated an already serious financial shortfall years in the making. “With so many varsity sports and limited financial resources, we would no longer be able to support a world-class athletics experience for our student-athletes without making these changes,” the letter said.

Tessier-Lavigne, Drell and Muir noted the excellence and contributions of the 240 student-athletes and 22 coaches affected by the decision, in addition to the thousands of alumni whose contributions to the sports resulted in 20 national championships and 27 Olympic medals. It was only after investigating a wide variety of funding alternatives, they said, that the decision was made to drop the sports. In the final analysis, they said, there was “no realistic path to ensuring that [the affected teams] would have the resources they needed to compete at the highest level without hindering our ability to support our other 25 varsity sports.” Each of the 11 teams will have the opportunity to become a club sport. A detailed FAQ on the decisions is available.

Today the Trump administration abandoned plans that would have forced international students taking courses only online to leave the United States, though details on the reversal were sparse at press time. Stanford had joined 19 other colleges and universities in a lawsuit challenging the federal directive, and had filed an amicus brief with 58 other universities in support of a lawsuit led by Harvard and MIT. “Our international students are  essential members of the Stanford community, and this new rule creates unnecessary uncertainty and complexity for them,” Stanford President Marc Tessier-Lavigne  told Stanford News Service. Stanford plans to have about half of undergrads and all graduate and professional students on campus at any given time in the fall, but many courses will be online.

“This virus has proven time and again in communities around the country and around the world that it will come back with a vengeance if you let your guard down,” said Sara Cody, ’85, the public health officer of Santa Clara County. In March, Cody, along with five fellow Bay Area public health officers, including Erica Pan, ’92, issued the first U.S. order to shelter in place. On July 2, Cody issued a new health order that puts long-term risk-reduction measures in place, including keeping high-risk businesses closed. “We’re all coming to recognize that certain activities just can’t be done safely at this time. There are, however, other activities that we can resume in limited ways if we do them with appropriate and consistent social distancing,” she said in a news conference.

Meanwhile, as the new case count continues to rise, Scott Atlas, senior fellow at the Hoover Institution and former Stanford Medicine chief of neuroradiology, says we shouldn’t be focused on the number of new cases, but rather on the number that are severe enough to warrant hospitalization. “I realize we have to wait to see the story play out here, but right now, the cases are going up for three weeks and we have no increase—in fact, we have a decrease in death rates,” he told Fox News on July 8.

In a letter to the Stanford community on June 30, President Marc Tessier-Lavigne outlined the ways in which the university is committed to advancing racial justice at Stanford, including seeking recommendations for how every department, school and unit can improve its climate and developing data-driven antibias training for faculty, staff and students. The letter describes three new initiatives that dedicate resources to overcoming the corrosive effects of racial bias in academic programs and research, including the creation of the Center for Racial Justice at Stanford Law School. Learn more about the initiatives and next steps here.

In an essay titled “The Work Starts with You: Three Habits True Allies Practice,” Dereca Blackmon, ’91, former assistant vice provost and former executive director of the Diversity and First-Gen Office, wrote, “There is no substitute for willingness—to keep looking for bias, to keep trying when you say the wrong thing, or to keep learning even when the Black Lives Matter movement isn’t the No. 1 news story.” Blackmon, now a diversity and inclusion consultant, spoke with Alumni Association president Howard Wolf, ’80, on Stanford Pathfinders about how to have authentic and meaningful conversations about race, gender, class and social justice. 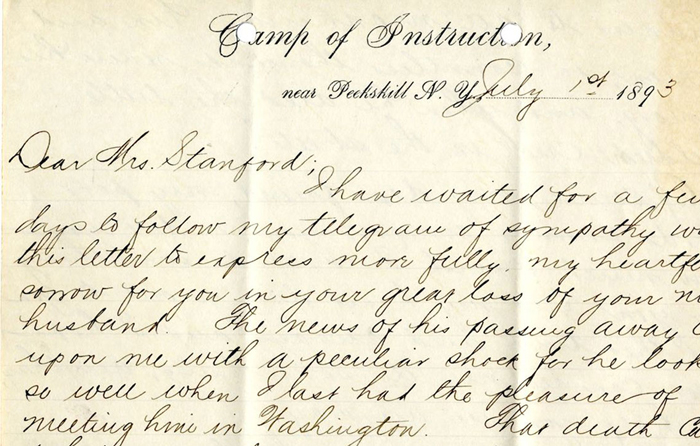 After Leland Sr.’s death in the summer of 1893, Jane Stanford received letters of condolence. Lots of them. And the Stanford Archives wants your help transcribing them along with the rest of Jane Stanford’s papers. If transcribing data about plankton is more your jam, you can do that. It’ll give you something fascinating to talk about on your next family Zoom, and you’ll never have to put on pants. (Who can even find their pants at this point?)

Home is where the office is.

Wondering how you’ll fit in at your new office job when there’s no office to go to? Stanford magazine asked Tim Su, ’07, MS ’10, co-founder of the remote office platform Tandem, for tips on starting a new job remotely.

A staggering 42 percent of the U.S. workforce is currently working from home, says economics professor Nicholas Bloom. Bloom, a senior fellow at the Stanford Institute for Economic Policy Research, told Stanford News Service that the shift exacerbates inequalities in our society, but our new working-from-home economy is likely to remain after the pandemic. His prediction? Cities, office buildings and public transportation will likely change to meet this new reality.

“It pains me that these words I wrote in 1992 still ring true today.” Sen. Cory Booker, ’91, MA ’92, on a Stanford Daily column he wrote just after the Rodney King verdict was announced. Read more essays by Black alumni on racial injustice.

North Americans judge people with big smiles to be more friendly and trustworthy, psychology professor Jeanne Tsai told Stanford News Service. In a masked world, she said, people will have to learn to smile with their eyes and voices and to read the eyes and voices of others.

“We have to ensure that technology is developed in such a way that it has a positive human impact and represents the values we believe in.” Fei-Fei Li, professor of computer science and co-director of the Stanford Institute for Human-Centered Artificial Intelligence, spoke with WIRED about research her Stanford colleagues have done using AI to examine policing, and how AI could help to counter police bias.

Meet the “Liberaltarians.” Political economists Neil Malhotra and David Broockman found that successful tech entrepreneurs are more liberal than most progressives when it comes to trade, taxation and social issues, and more conservative than most Republicans—in fact closer to libertarians—when it comes to government regulation.

Harry Elam  reflects on his 30 years at Stanford. The former vice president for the arts and vice provost for undergraduate education began his tenure on July 1 as the 16th president of Occidental College.

How Next Year Will Be Different