How to hold a fair election during a pandemic.

The Stanford Center for American Democracy gathered Stanford faculty on July 28 for a 90-minute webinar to discuss the upcoming elections. Moderated by center director and political science professor Michael Tomz, the panel presented research on vote-by-mail systems, including the finding that they increased voter turnout equally in both political parties, thus conferring an advantage to neither.

Stanford Law professor Nathaniel Persily, JD ’98, pointed out that political polarization is less prominent at the local and state government levels, which is a reason for confidence in their ability to administer the election. “We need to amplify the voices of local election officials,” he said. “There’s going to be a lot of confusion about how to vote, where to vote, the safety of polling places, etc., and the more we amplify those voices, the more they might drown out the more nefarious actors.”

Stanford’s psychology department and the student-led Stanford Eugenics History Project have requested to rename Jordan Hall, which houses the department. David Starr Jordan, the university’s founding president, was involved with the American eugenics movement. The group has also requested removal of the statue of Louis Agassiz on the façade of the building. A mentor to Jordan, Agassiz was not significantly associated with the university. He promoted polygenism, which holds that human racial groups have different ancestral origins and are unequal.

The committee will gather input from alumni and the broader campus community through several town halls with a goal to submit a recommendation at the beginning of the fall quarter in September. Alumni can attend an August 20 town hall meeting on the topic. Additional information on the committee’s charge and process is available here; input can also be submitted by emailing campusnames@stanford.edu.

The person next to you is on your side.

HBO comedy writer Amy Aniobi, ’06, spoke with the Stanford Daily about her career path and the Stanford experiences that helped her along the way. One bit of advice? Instead of trying to network up, Aniobi said, network horizontally. “Kill that feeling of competition against women, other people of color, and link arms with those beside you. When you network this way, you find more opportunities that are right for you.”

As case counts rise and with no end in sight, immunologists are under pressure to figure out how the immune system responds to the coronavirus. Taia Wang, assistant professor of medicine and of microbiology and immunology, told the Atlantic that upcoming studies consistently show that many people seem to lose their coronavirus-neutralizing antibodies after a couple of months. But even having no measurable antibodies doesn’t necessarily mean you aren’t immune. “There’s a common notion that antibody quantity is all that matters, but it’s more complicated than that,” she says. “The quality of the antibody is as important.” Of course, quantity is easier to measure. “There are more ways to characterize quality, and we don’t know which ones are relevant.”

What your refrigerator says about you. 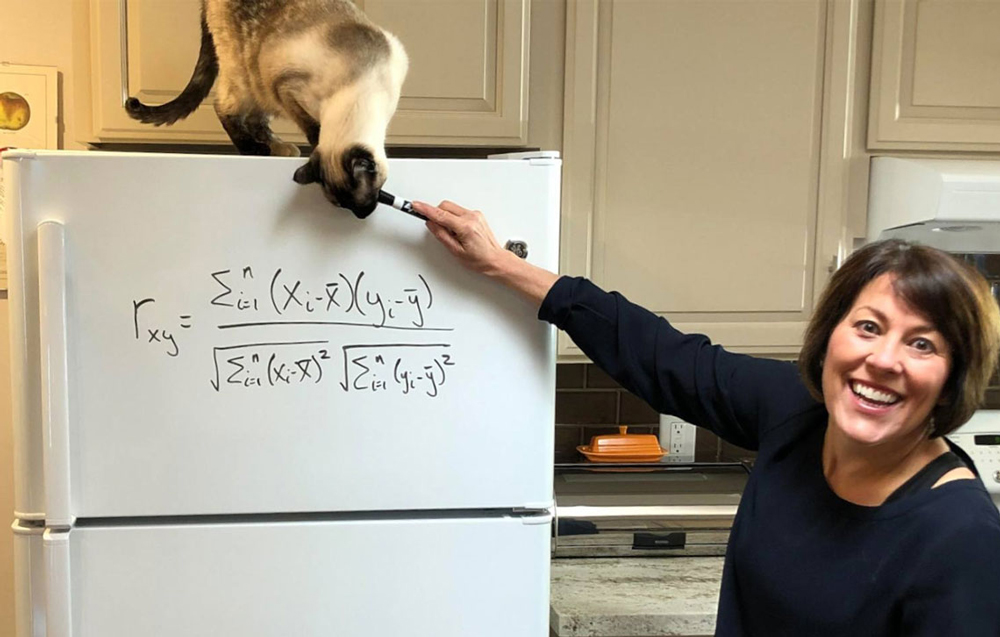 At the home of organizational behavior professor Sarah Soule, the fridge is off-limits during lecture hours. Turns out the wipe-clean surface makes a perfect whiteboard for teaching from home. Pictured above is a correlation coefficient, one of the fundamental statistical equations Soule teaches and uses in her research. Soule says remote teaching has made her feel closer to her students because they’re seeing each other in their homes. “I did have a student ask me to open the refrigerator so they could look inside. This was sort of funny, because you can tell a lot about a person’s lifestyle by simply looking at the contents of their fridge.”

Graduate School of Business professors Bob Sutton and Hayagreeva Rao have studied how leaders respond to crises, from natural disasters to recessions to ethics scandals. Among their top tips for being a good boss during a pandemic? Take responsibility for hard decisions, show compassion, and don’t forget that your employees are watching your every move, especially during uncertain times.

Whether or not you’re a boss, you could probably learn how to negotiate better. Even in a pandemic, Graduate School of Business professor Margaret Neale says, you should ask for what you want. A good place to start? Consider your counterpart’s interests and motivators. Here are her top tips for negotiating successfully at work and at home.

And if an interpersonal conflict at work is fraying your last nerve, this might help. GSB lecturer and executive coach Ed Batista, MBA ’00, says that misunderstandings and incorrect assumptions are behind most co-worker conflicts. In such cases, empathy can be a strategic tool. When you find someone’s behavior frustrating, he says, take a moment to slow down, examine the assumptions you’re making about that person, and ask, “What is that person’s reason?”

For most of the country, back to school means back to remote learning. Rather than worrying about whether your child is falling behind as a result, Graduate School of Education professor Deborah Stipek says it’d be better to ask “How do we ensure that our children get the best possible opportunities to learn under these challenging circumstances?” Parents of elementary school kids can supplement school learning with reading, games and activities, she told the New York Times, adding that parents shouldn’t feel guilty that they aren’t doing enough. “Something as simple as talking about measurements and the effects of different ingredients while baking muffins can be educational,” she said.

The Pac-12 conference has postponed all sports competition until at least January. "It has become apparent," Stanford director of athletics Bernard Muir said, "that competing this fall would introduce undue risk in terms of the health and safety of participants and the spread of the virus in the communities in which competitions were scheduled to take place."

You’re balancing a lot right now, but have you watched Olympic gold medalist Katie Ledecky, ’20, swim across a pool with a glass of chocolate milk on her head?

Here’s how pool testing works (the other kind of pool).

Stanford Talisman performed “Lift Every Voice and Sing,” aka the Black national anthem, at the San Francisco Giants’ home opener via videoconferencing.

The U.S. could be headed for a post-pandemic baby bust, which GSB professor Charles Jones says would be bad news for the economy.

Mask anxiety is real; the 1918 flu at Stanford; antibody testing