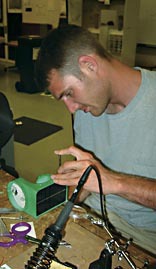 Like so many wonders electricity has wrought in the past century, home lighting is usually taken for granted. Flip a switch, bingo. Yet 1.6 billion people around the world have no electricity in their homes. For many of them, darkness is a relentless form of deprivation.

Now, a group of Stanford students and faculty are working to defeat the dark.

Social Entrepreneurship Startup (SES), a two-quarter seminar aimed at incubating problem-solving businesses, has created a home lighting system appropriate for the developing world. Headed by engineering professor Bill Behrman and business professor Jim Patell, SES also featured mechanical engineering professor David Kelley, MS ’78, 11 product designers from Kelley’s IDEO firm and a roster of experts ranging from anthropologists to plastics manufacturers. The idea, says Behrman, is to harness the intellectual energy and expertise of Stanford and Silicon Valley and apply them to the social arena. “We want to see if Stanford can be as good a catalyst for social innovation as it has been for commercial innovation.”

The answer appears to be yes. In less than six months, students developed a plan to build, sell and service an affordable household light that requires no electricity and no fuel, and are preparing to introduce it in India. Their product, a rechargeable, portable lamp with an embedded solar panel, relies on the simplicity and efficiency of light-emitting diodes, or LEDs. LEDs use as little as one-tenth of a watt—5 percent of the energy of a traditional incandescent bulb—and last 10 times longer, making them ideal for areas where power generation is a concern. “LEDs change the economics significantly,” says Behrman, by making possible mass-produced lighting that is affordable for people who live on pennies a day.

Light Up The World, a Canadian foundation, introduced a hand-built LED light into several hundred homes in Nepal and Sri Lanka in recent years, proving that the technology is a viable alternative for families lacking electricity, says Behrman. In partnership with Light Up The World, “we want to take their idea and scale it for millions rather than thousands.”

“This is not a charity model,” he adds. “From the outset, we wanted a model that would generate enough profit all along the supply chain to make it self-sustaining. But we had to be sure that whatever we did would be affordable to the people who needed it.”

The course involved an unusual collaboration between 14 undergraduates in the winter term and 21 graduate students in the spring. The undergraduates essentially sought to answer three questions: who could use the light, where do they live, and what are their needs?

Calling on a vast network of non-governmental organizations, on-the-ground contacts in various countries and experienced international development experts, the students identified China, India and Mexico as the best markets for the LED lights. “We had an extraordinary group of advisers throughout the project,” says Behrman. “India’s minister of nontraditional energy heard about what we were doing and came to campus to meet with our students. A lot of people want this to succeed.”

The undergraduates distilled their findings into a briefing book that became the starting point in the spring quarter for GSB and engineering graduate students, who were divided into three teams. Their job: design and build a prototype lighting system for one of the three countries, write a business plan and make the whole thing doable in the real world. They had 70 days.

The assignment became all-consuming, says Ginger Turner, a master’s student in management science and engineering and a member of the India team. “The dedication from the very beginning was awe-inspiring,” she says. “One of our team members, David Gilbert [MBA ’03, MS ’04], showed up on the first day even though his wife was due to give birth. The project was just so compelling people felt like they had to give everything they had.”

The technological challenges were vexing: the lights had to be versatile, durable, easy-to-use, rechargeable and, above all, cheap. Families in India that used kerosene lamps could not be expected to pay significantly more for a newfangled light than they paid for kerosene, roughly $12.50 per year. “Our earliest prototypes would have cost $60,” says Behrman. While engineering students experimented with a dozen or so designs, business students wrestled with the complexities of building a microeconomy for regions with desperately low incomes. The team eventually settled on a battery-powered light with a built-in solar panel that could be manufactured for about $12. (A smaller, flashlight-style product designed for the very poorest consumers could be made for as little as $5.25.) Behrman recalls a breakthrough moment when students located a photovoltaic supplier in China who could dramatically reduce their production costs. “We found them on Thursday and by Saturday we had a new design,” he says. “That’s what you call rapid prototyping.”

In a crowded room at the Faculty Club in late May, students presented their plans to a group of venture capitalists, manufacturing representatives and engineers, as well as David Halliday, founder of Light Up The World. Halliday rose at the end, thanked the students for their “passion and energy,” and related an anecdote to illustrate the promise of the Stanford project. A Light Up The World initiative that recently placed LED lamps in 410 homes in Afghanistan had prompted a phone call from an Afghani representative. “He asked me how soon I could get him 100,000 more lamps,” Halliday said.

When the school year ended, the SES students kept going. Ten of them worked through the summer with contacts in India to modify the prototype and the business plan based on user feedback. Recalls Turner: “One night Mark [Patel, MBA ’03] and I were on a conference call with two schoolteachers from a rural village and they told us that in some places there was one building in the village, like a community center, that was wired for electricity. We looked up from the phone and smiled at each other because we realized that maybe not every family would have to have a light with a solar panel, which increases the expense. Maybe they could just have the lights and take them to the center to get them recharged. There were revelations like that nearly every day. Little enlightenments.”

Turner, Patel and SES classmate Sally Madsen, ’01, MS ’03, traveled to Calcutta in July to locate guides who could help with field-testing. “Our goal is to hand over to Light Up The World a plan that they can take to the World Bank or a foundation to get funding for the next one to three years,” says Turner.

“The reason most of us stayed involved over the summer was because we hated to see this work go to waste. We feel an obligation to the people in India who have worked with us on this. It wouldn’t be right to let it die.”

At 5-Foot-8, One of the College Game's 'Most Dangerous Players'

Back in the Swim of Things