The Life of His Dreams

One morning in 1974, as Roger Shepard was not quite fully awake, a curious image came into his mind. It was an optical illusion of an elephant with four offset feet and five legs that disappeared into negative space. He began drawing and redrawing what he’d seen. Shepard had been sketching images from his imagination, and later, his dreams, ever since he was in elementary school, where his teachers often scolded him for doodling instead of paying attention in class. Shepard’s elephant sketches, now well known, led to his book Mind Sights: Original Visual Illusions, Ambiguities, and Other Anomalies, published in 1990. 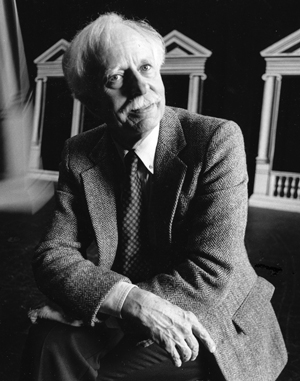 Roger Shepard, professor emeritus of psychology and National Medal of Science recipient, died on May 30 of Parkinson’s disease. He was 93.

For those in academia, Shepard’s fame extended far beyond his brain-bending illustrations. His curiosity about the mechanisms of the mind led him to previously unexplored corners of cognitive psychology. At Bell Laboratories, he developed nonmetric multidimensional scaling, a mathematical method for mapping subjective data, such as how people perceive shapes. At Stanford, he completed groundbreaking research in nascent psychological fields, such as mental imagery and generalization. “His scientific ideas revolutionized psychology,” Ewart Thomas, former dean of the School of Humanities and Sciences, told the Stanford News Service.

When she would stop by his office, “he’d have to remove piles of papers from a chair because every surface would be covered,” says his former graduate student Jennifer Freyd, PhD ’83, founder and president of the Center for Institutional Courage and professor emerit in the department of psychology at the University of Oregon. Mixed in with the reams of research were stacks of newspaper cartoon clippings. It was not unlike Shepard’s own mind, where a playful, artistic side informed his scientific endeavors, and vice versa.

Even his most famous research came from his subconscious. A dream about rotating three-dimensional objects inspired his series of studies that ultimately established humans could conceive of such an object and rotate it. Mental rotation was later used in the assessment of patients with brain lesions and during investigations of the neural coding of movements. His drawing of the Shepard tables—two identical tables that in different orientations appear to vary in length and width—became a symbol not only of mental imagery but also of cognitive psychology as a whole.

“I didn’t realize how famous he was until college,” says his daughter, Shenna, who has a doctorate in clinical psychology. When Shenna was a first-year student, an older student’s cognitive psychology textbook caught her attention: Its cover featured the three-dimensional drawings her father had used in his first mental rotation study.

At home, Shepard spent time in his study, working on his research ideas, writing, or drawing. “I think he loved going into his own head and experiencing the world—and then at the same time, he was analyzing [his experience],” says Freyd. For Shepard, life itself was often “like a lucid dream.”

Shepard is survived by his wife of nearly 70 years, Barbaranne; children, Newland, ’81, Todd, and Shenna; and granddaughter.