In a world seemingly consumed by negativity, Albert Bandura believed in the power of people to change their lives—and the world. He had experienced that himself, rising from modest circumstances on the Canadian prairie to become one of psychology’s most influential thinkers. And Bandura built his career on his theory of self-efficacy: an insistence that people’s beliefs in their abilities can shape their behavior. 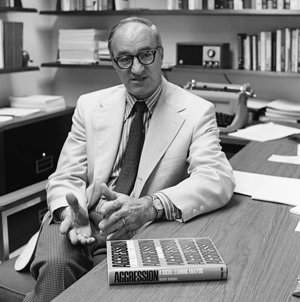 Bandura, the David Starr Jordan Professor Emeritus of Social Science in Psychology, died at his Stanford home on July 26. He was 95.

Born in rural Alberta, Canada, Bandura earned degrees from the University of British Columbia and the University of Iowa. He arrived at Stanford in 1953 and began taking steps that would transform his field. “He went against the mainstream and really oriented psychology to the way people learn and form beliefs about their impact on the world,” says Carol Dweck, the Lewis and Virginia Eaton Professor of Psychology.

Bandura is most recognized for the “Bobo doll” experiments he and colleagues started in 1961. After children watched adults hit an inflatable doll called Bobo, they were prone to behave aggressively toward the doll, suggesting that children can learn social behavior, including aggression, from observation. Further experiments in which children were shown filmed violence indicated that exposure to televised violence could also trigger aggressive behavior. Bandura testified about his work before Congress, prompting the Federal Trade Commission to issue rules limiting violent content and shaping what generations of children would see on TV.

But Bandura’s impact extends far beyond Bobo. “His claim to fame is, unfortunately, the Bobo doll because it is visual,” says Philip Zimbardo, professor of psychology, emeritus. “For me, that is the least important thing he did.” Zimbardo points instead to Bandura’s enduring work on self-efficacy, research that continued into his 90s. His final paper, “Enlisting the Power of Youth for Climate Change,” focused on the capacity of young people who believe they can make a difference to effect change. In 2016, President Barack Obama presented Bandura with the National Medal of Science.

Carol Bandura Cowley remembers how her father, a tireless worker, would set it all aside when her twin sons visited. They would spend hours in his garden, gathering tomatoes to share with the psychology department and constructing elaborate “raccoon traps” out of scrap wood.

Toward the end of his life, Bandura felt an urgent need to examine how his theories of personal and collective agency could be harnessed to help solve the world’s pressing challenges, from climate change to gun violence and global health crises. “He had this positive belief that, given the right circumstances, people have much more control over their life and trajectory and ability to pursue the things that are important to them,” Cowley says. “He still had hope.”

Bandura was predeceased by his wife, Virginia. In addition to Cowley and her two sons, he is survived by his daughter Mary.

According to Stanford psychologist Carol Dweck, you’ll reach new heights if you learn to embrace the occasional tumble.