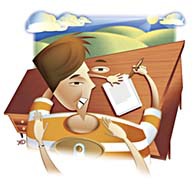 One summer day in 1974, a woman came to the door of our home on Green Street and asked for me. I was 15 at the time, in between my freshman and sophomore years of high school. My visitor was Joan Hoffman, an English teacher and the adviser for the student newspaper and yearbook.

We talked for a while, and though I don’t remember the substance of the conversation, I do remember that when we were finished Mrs. Hoffman had convinced me to enroll in a course she taught titled Writing Techniques. It was probably the most important career decision I ever made.

Over the next three years, with her guidance, encouragement and tutelage, I began to recognize what Mrs. Hoffman had apparently seen long before I—that a life as a writer would suit me well. All these years later, I can easily identify that midsummer visit as the origin of my passion for words and the genesis of a successful career. And I have never stopped being grateful for the teacher who led me there.

I’m a teacher’s kid—my father taught high school biology for almost 40 years—so maybe I would have been predisposed to holding teachers in high esteem even without some great ones of my own. As an undergraduate on a semester abroad, I studied in Wales with a literature professor named Raymond Garlick. He had been injured in World War II, used a cane and had a severe limp, but put him in front of a class and his physical ailments seemed to dissolve, replaced by an animation and eagerness that inspired us to learn in spite of ourselves. I still have the essay I wrote about Welsh author Richard Hughes because of four words Professor Garlick scribbled in red at the end of his evaluation—“You have a talent.”

In this issue, you can read about some Stanford teachers whose influence was profound and long-lasting (“High Marks”). There have been so many over the years, and often in unpredictable places. The stories about them come from the most authoritative sources, their former students, some of whom have carried the influence half a century or more.

A few of the men and women you will meet are long dead, others retired, many still at it, prodding, pushing, provoking students to imagine something more. Even if you don’t know the individuals, I think you’ll recognize the breed.

In mid-October, I went back to the high school where 25 years ago Mrs. Hoffman, now retired, taught me to respect the language, to write with discipline and style, and to find a voice that was distinctively mine. I called her at home to arrange a meeting.

“Look for me at the reception in the gymnasium,” she said. Not “gym”—gymnasium.

“Bring a copy of your magazine.”

We sat and ate cake and talked about places we had been, people we had met. Then, as we were winding down, she told me that she had used some of my work as texts in one of her courses. Canonized by my mentor—I couldn’t imagine a greater compliment.

We parted, promised to keep in touch. I left the high school swimming in memories and reflections, flattering myself that perhaps I had been her favorite, a protégé, a special case.

I think I forgot to thank her.

You can reach Kevin at jkcool@stanford.edu.