A Witness to Evil 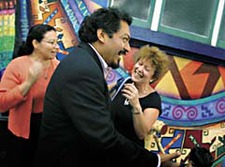 Terry Karl will never forget the corpses she saw in El Salvador.

“On my very first day there, I saw a body in a McDonald’s parking lot,” she recalls. “You saw bodies in the fanciest shopping centers, on the airport road, hanging from bridges, and outside of schools and churches. The terror was meant to be as visible as possible.”

Karl, a professor of political science and former director of the Latin American studies program at Stanford, began making fact-finding trips to El Salvador during the early years of its civil war, which began in 1980. She was a consultant for the United Nations-brokered peace agreement that took effect in 1992. During the 1980s and ’90s, Karl led congressional delegations and made brief visits on her own. Every time she went, she conducted interviews—with Christian Democrats and members of the leftist guerrilla organization FMLN, with military officers and Roman Catholic Church workers. “There were 1,000 people being killed each month, and you didn’t want anybody to find you with a tape recorder,” Karl says. “So I kept notes in code and never used anybody’s name.”

Looking back two decades, Karl, ’70, MA ’76, PhD ’82, says she never imagined she’d be asked to draw on her notes and observations to bring two of El Salvador’s most notorious military commanders to justice. But that’s what happened last July, when a federal-court jury in West Palm Beach, Fla., found Gen. Carlos Eugenio Vides Casanova and Gen. José Guillermo García liable for torture, rape and other atrocities committed during El Salvador’s civil war. The jury also ordered the two generals—who moved to Florida with their families in 1989—to pay $54.6 million in damages to three Salvadoran-born plaintiffs, all U.S. residents now.

“Terry was an absolutely central person for us as an expert witness,” says Peter Stern, co-lead counsel in Romagoza v. García. “She had to set out for the jury the history of the relationship between the military and the landed aristocracy, and the way the military effectively ruled the country for generations.”

Just as important, Stern adds, was the time Karl had spent on the street and accompanying staff members from the legal aid office of the archbishop of San Salvador on searches of the city morgue. “She was able to give jurors a very fine-grained picture of how visible the human rights abuses were, and that was critical because we had to convince the jury that no one could have been in El Salvador then and not known about the bad things that were going on.”

Karl says she had particular success talking with women in town markets, thanks to her fluency in Spanish, her petite size and her unimposing demeanor. She learned when guerrilla attacks were imminent, and when to listen for sudden silences. “When people stopped talking it usually meant you were getting close to something.” Often, in spite of her caution, Karl’s hotel rooms were searched and her notes confiscated. And when she drove into the countryside with foreign journalists, the tires on their Jeeps were slashed.

But Karl kept returning. “I was so profoundly shocked by what I saw and so upset by my interviews and so moved by the courage of the people who were documenting human rights abuses that I couldn’t not go back,” she says. “I guess I think if you don’t report when you see people dying like that—being tortured before they were killed—then you become complicitous.”

The three plaintiffs in the Florida trial gave grim reports of atrocities. In 1980, Juan Romagoza, a doctor who ran a rural health program, was tortured by the national guard. National police brutalized Carlo Mauricio, a professor at the University of El Salvador, in 1983. Church worker Neris Gonzalez was eight months pregnant in 1979 when national guardsmen abducted, tormented and raped her. Her baby boy died at 2 months as a result of his injuries. Disregarding death threats, all three testified about what they had seen or endured—severe beatings, choking, electric shocks, sexual violence, submersion in water, cigarette burns, decapitations. Many of the survivors’ family members had never heard about their loved ones’ suffering in such detail, and the judge had to call frequent breaks in the emotion-charged proceedings.

Karl held the hand of Neris Gonzalez’s daughter while Gonzalez testified. Then it was Karl’s turn to set the plaintiffs’ ordeals in the context of broad patterns of human rights abuses. “I thought of it as teaching,” she says of her approach to the jury, which was almost entirely white and included no Spanish-speaking members. “My challenge was to go to West Palm Beach and somehow teach the reality of El Salvador to a population that had trouble working voting machines. It was a very hard thing to explain to Americans who had had no experience of these things.”

Karl, who had helped identify torture victims at infamous basureros de cuerpos throughout the country, understood the state’s reliance on organized terror and could lead jurors, step by horrifying step, to those who had to be responsible for the estimated 75,000 deaths in the civil war. Gonzalez, for example, had been left for dead by her torturers on a so-called “body dump” more than 30 miles from San Salvador. “If there’s a military barracks at the entrance of a road that leads to a body dump, and you can’t get to the body dump without going through a number of military blockades, then you can infer that the people who are dropping the bodies there are the military,” she says.

It took Karl more than two years to prepare for her 2 1/2 days on the stand. She read thousands of declassified cables from the U.S. State Department, Central Intelligence Agency and Defense Intelligence Agency, donating all her time, as did the plaintiffs’ lawyers and the staff of the Center for Justice and Accountability, which brought the lawsuit. Drawing on documentation provided by Amnesty International, the U.N. Truth Commission and the Organization of American States, she developed time lines and military organizational charts.

The plaintiffs’ attorneys had to show a pattern of gross and systematic human rights violations and prove that the accused generals knew or should have known about the abuses and failed to prevent them. Although no reference was made to a previous U.S. trial in which the jury did not find the generals liable for the 1980 torture, rape and murder of four American Maryknoll nuns, that didn’t keep Karl from talking about why the state targeted religious workers.

“The Catholic Church taught that hunger, disease, infant mortality and other misfortunes were not the will of God—that you, as a peasant, could do something about it—and the church supported workers organizing themselves,” she says. “The church was also the single most important documenter of human rights abuses, particularly under [assassinated] Archbishop Romero.”

During her cross-examination, Karl says, there came a moment when “I turned and spoke to the generals, looking straight at them. It was my only chance to say something that I knew as a political scientist: ‘If you had stopped the torture in 1979 or ’80, and if you had treated the civilian population decently, you might have won the war.’”

The military in El Salvador had long argued that the threat of communism posed an overwhelming challenge to the nation. But Karl testified that she had traveled in the guerrilla zones and talked with youngsters on the front lines. “They weren’t reading Marx or Lenin,” she added. “They were 12 and 14 years old, they were uneducated, and they told me, ‘They killed my mother, they killed my brother, they raped my sister.’ That’s what made the guerrillas a real army—the repression.”

Renegade psychiatrist Fuller Torrey has taken on fiery critics, federal researchers and Freud in a decades-long search for the causes of schizophrenia.