During her residency in plastic surgery, Sheryl Lewin, MD ’98, was given a block of soap, a carving tool and 30 minutes to sculpt an ear. Afterward, she looked up its anatomy. “Oh,” she remembers thinking, “it’s a lot harder than one would think.”

Almost a decade later, by then an attending pediatric plastic surgeon, Lewin was the one challenging herself. Her son was 5, and whenever he napped during a family vacation, she carved the shape of his ear into a block of soap. Though she came closer to capturing its structure, she still wasn’t satisfied.

In the years since, Lewin has devoted her career to understanding the complex elegance of the ear. For her patients, she is as much an artist as a physician, focusing her career around a single procedure: creating ears for children born with microtia. The congenital condition affects one in every 6,000 to 12,000 children and ranges in severity from a small ear (the literal meaning of microtia) to a hint of undeveloped ear tissue to no ear at all. 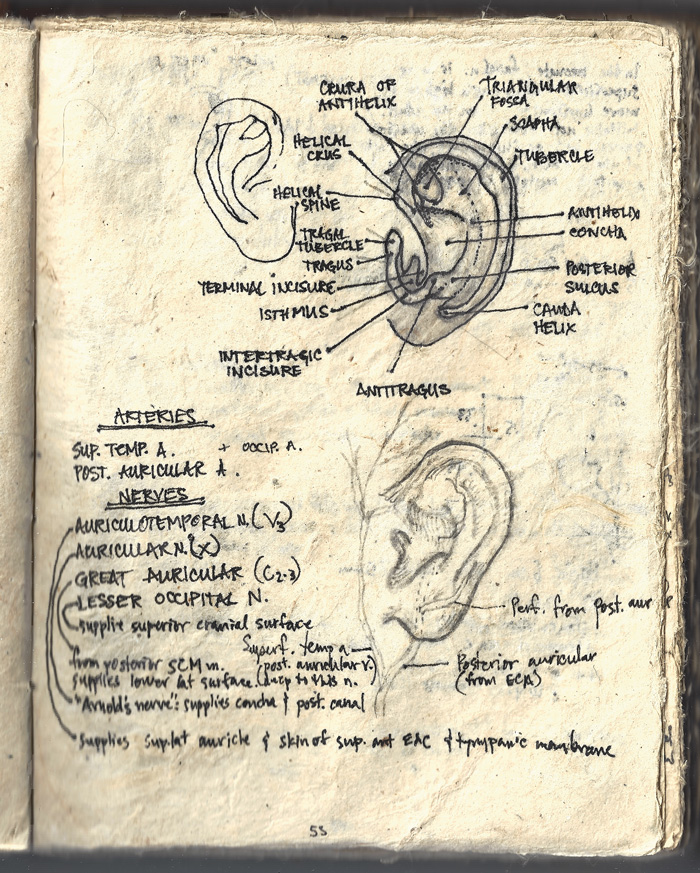 Historically, masters of realistic art have stood out for their skill in representing this complex part of the human body, such as in Renaissance painter Antonio Pisanello’s Portrait of Leonello d’Este, of which one critic writes “the delicate, shell-like ear give[s] an impression of refinement and quivering sensitivity,” or in October, the 19th-century naturalist tableau by Jules Bastien-Lepage in which the perfectly detailed ear of a young woman harvesting potatoes is rendered near the center of a pastoral landscape.

And yet the analogy between art and surgery falls short, since Lewin’s work goes well beyond representation, and the material she uses is both synthetic and organic: a rigid polymer sculpture that she overlays with fascia and skin. She must take into consideration function, sensation and physical integration with a vision of how the ear will fit as the body grows, since her patients—the majority of them children—will spend a lifetime with her creations.

Lewin never planned on becoming a physician. The child of a nurse and an architect, she grew up in Studio City, Calif., passing her free time drawing, painting and sculpting. In third grade, Lewin started a business creating made-to-order sculptures. She sold the figurines to family friends, and by the time she was in high school, she was composing them inside glass spheres—with techniques similar to building a boat inside a bottle—and turning them into Christmas ornaments. When it came time for college, Lewin decided to study architecture at UC Berkeley.

Though she loved architecture, she struggled to see it as the right career. As she was nearing graduation, her boyfriend, John—her high school sweetheart and now her husband—asked her why she’d never considered going into medicine. He had a point. “I like working with people in a more direct way,” Lewin says. “Architecture was missing that human component.”

At first, she thought it was too late to embark on medical training. But John found a nearby postbaccalaureate program where she could complete premed requirements. He also called med schools and was told that it wasn’t too late.

‘Our story had gone from a little girl who wasn’t able to have ears and was made fun of. Now Annika gets to have ears, and she gets to say they are her sister’s ears.’

“ ‘Well, let’s see if I can handle science,’ ” she recalls telling herself. “To my surprise, I was much more interested in the science courses than I anticipated. And I very much remember my interview at Stanford. I came home and said that would be my dream.” The ambition and social concern of its students impressed her, as did the Medical Scholars Research Program, a funded fifth year that allows students to gain hands-on experience in academic research.

The final turning point in her search for a vocation came when, as a medical student, she saw her first cleft lip. “I called my husband and said, ‘This is what I’m going to do.’ It’s an amazing concept to me. You take this brand-new baby from its parents. They’ve only ever looked at this child who’s had an obvious deformity, and you bring back this baby who’s had this great transformation.”

As a resident in plastic surgery at USC, Lewin learned the reconstructive techniques for microtia. “She had already determined she was going to be the best at ear reconstruction and take it to another level,” says David Kulber, one of her professors there.

Most surgeons treat microtia by creating an ear from rib cartilage (the microtia team at Lucile Packard Children’s Hospital Stanford has its own specialized technique for doing so). Lewin has pursued an alternative technique, developed in Germany in 1982, that she learned about in 2004, during her postdoctoral fellowship in craniofacial and pediatric plastic surgery at Children’s Hospital in Los Angeles. Using porous poly­ethylene, it allowed for the creation of ear implants that, though thin, were strong enough to resist the contraction of the healing skin—a process known as scar contracture. By melting the implants together and carving them, she could fashion aesthetically pleasing ears. 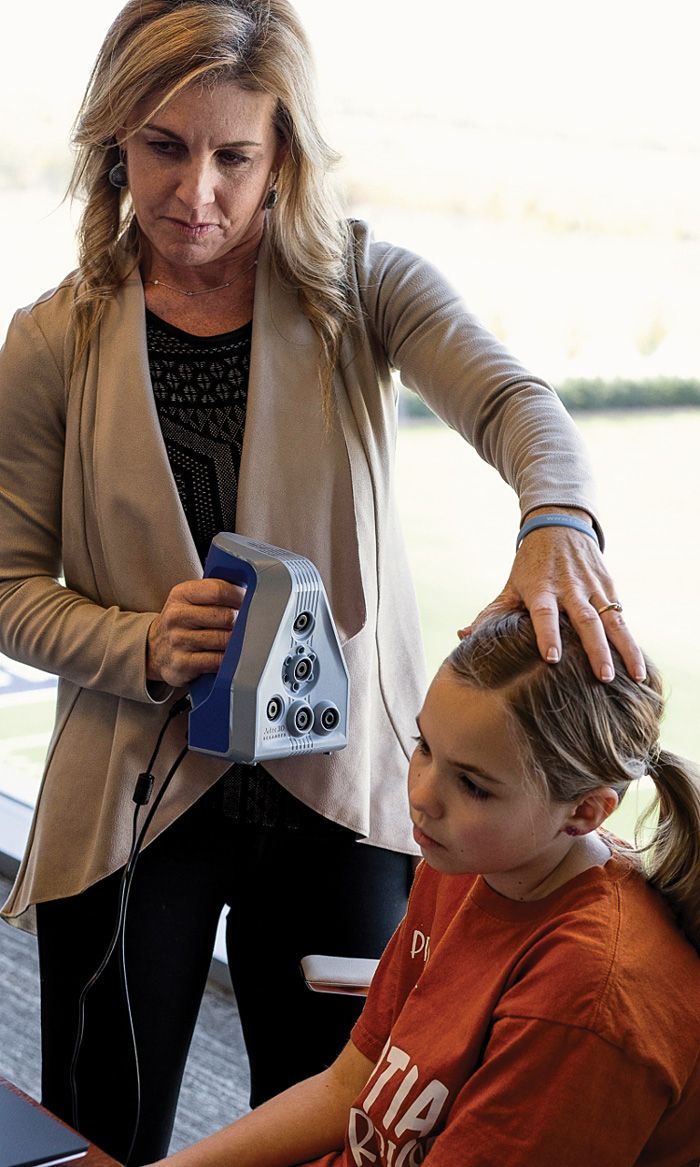 Lewin settled down in Southern California, where today she lives in Palos Verdes with John and their children, Geoffrey, 17, and Kaci, 16. By 2007, the year she carved Geoffrey’s ear in soap, she was director of microtia at Children’s Hospital. Five years later, she began a private practice in Torrance, Calif., focusing almost exclusively on the condition. She now performs 150 ear surgeries each year.

Lewin’s continued quest to make ever-more-realistic ears led to an unpaid role advising Poriferous, a company producing custom polyethylene implants. She recommended developing the ear in a single piece, which reduces the risk of breakage when children play. In 2018, she hit on another innovation: using a 3D scanner on patients’ “big” ears or, in the case of children without either ear, on siblings’.

“As much as I thought I was doing OK sculpting, I was never as good as what this silly little scanner has taught me,” she says. “There’s so much more detail than even I knew. You think of the ear as an oval, but if you really look at it from the back and the side and other angles, it’s actually moving in three different dimensions.”

Before each surgery, she begins with a 2D drawing on paper of the ear, eye and eyebrow on the unaffected side to capture “the artistic gestalt of where the ear should go.” In surgery, she lifts the skin where the ear is missing, as well as the tiny earlobe present in many microtia patients, keeping them attached to the body’s blood supply. She does the same with a flap of fascia—thin, translucent tissue rich with arteries, veins and nerves that is capable of nourishing and giving sensation to grafted skin. Next, by carving two millimeters at a time from the base of the polymer implant, she fits it to the skull, stitches it in place and covers it with fascia. She then puts in a drain that she suctions to mold the fascia over the implant like shrink-wrap. 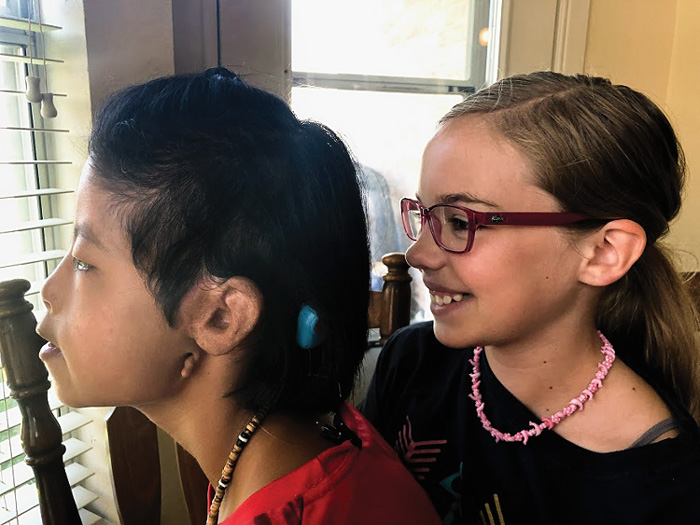 After evaluating symmetry and placement, she sews the skin—seven square inches are required to cover the ear—artfully to hide the scars. Some of this skin comes from the belly, and since its coloration is slightly different, Lewin uses it for the back of the ear. For the front of the ear, she removes skin from the back of the opposite ear and grafts it to the fascia. She attaches the tiny earlobe, sculpts a tragus (the fleshy prominence in front of the ear canal) and creates the appearance of a canal for children who don’t have one. In some patients, she implants a titanium screw in the skull that will later allow a hearing aid to transmit vibrations to the cochlea.

Shannon Sappington, who brought her daughter Annika to Lewin for microtia surgery, recalls her as “honest and very bighearted, very patient and so down-to-earth.” In 2017, Sappington and her husband, Jay, adopted Annika from an orphanage in China, where she had lived for eight years. She had been born without ears. The couple already had three children, so Lewin scanned the ears of their eldest, Jadyn, who was only a year older than Annika, to create implants for her.

“I’ll never forget when, in March of last year, Dr. Lewin washed Annika’s hair and took off the ear mold that was protecting her new ear,” Sappington recalls. “Dr. Lewin warned Annika, ‘Remember, it’s going to be all kinds of crazy colors at first. It’s going to be purple and red.’ When Dr. Lewin took that mold off, Annika was really quiet and shy. She glanced in the mirror and she was trying to hide a smile. I got emotional, and Dr. Lewin got emotional. Our story had gone from a little girl who wasn’t able to have ears and was made fun of. Now Annika gets to have ears, and she gets to say they are her sister’s ears.”

In addition to Lewin’s private practice, she also runs Earicles–Miracles for Ears, a nonprofit for children with failed microtia surgeries. She redoes the surgeries in her clinic, which is “warm and welcoming—more like a living room than an exam room,” Lewin says. The operating room, where she spends up to 10 hours a day, has a wall of opaque glass that reveals the shadows of the trees outside. Lewin designed the clinic herself, putting her architectural skills to use at last.

‘When You Don’t Know, You Feel Alone in the World’

The odyssey of the undiagnosed.