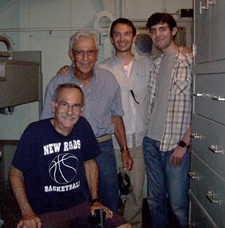 Nearly 65 years after he ended his service on the battleship North Carolina, Peter Polk returned in August to see it again, this time with special guests in tow: his son, grandson and great-grandson. Polk, '45, told the Associated Press that his experience on the ship "changed me from a boy to a man," and he wanted to share it with his family. "It's amazing. I can't believe I'm standing where he did in World War II," said Polk's 16-year-old great-grandson Mackenzie. Now docked in Wilmington, N.C., the ship was involved in several major engagements, including Iwo Jima. Polk and his wife, Carol (Hurwitz), '45, married in October 1945 during a shore leave.

One of television's surprise hits this year featured characters created by novelist Terry "Tess" Gerritsen, '75. Rizzoli and Isles pairs a homicide detective (played by Angie Harmon) and a forensic pathologist (played by Sasha Alexander) based on women from Gerritsen's best-selling crime thrillers such as Body Double and The Apprentice. The show, which airs on TNT, attracted more than 6 million viewers per episode, prompting the network to order a second season next summer. Although Hollywood producers have optioned several of Gerritsen's books, this is the first adaptation to reach a screen. "I'm still a little bit stunned by all of this happening," Gerritsen says. "The best thing about it is seeing two women who I feel I sort of gave birth to grow up and walk onto TV." 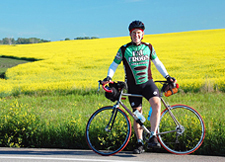 PEDAL TO THE METTLE

Ah, retirement: Up at dawn to bicycle 80 miles. That's how Tom Fortmann spent most of his summer. Fortmann, '64, MS '66, was part of the Tenacious Twenty, a group of riders ranging in age from 57 to 72 who pedaled from Washington's Olympic Peninsula to Bar Harbor, Maine, in 58 days. They covered 4,096 miles, but who's counting? Along the way, they experienced 125 flat tires and a close call with a logging truck, but only one minor crash. Friends find the whole idea rather incredulous, Fortmann says, and want to know how he did it. "I just got up each morning and did it again. Fifty miles, 100 miles, whatever—you just mount up, read the day's directions, and start pedaling toward the sunrise." 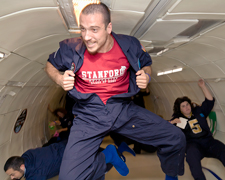 PUTTING THE GEE! IN ZERO G

Take a group of dedicated teachers, add student-designed experiments, subtract gravity, and you get a sure-fire formula for attracting students to science, technology, math and engineering fields. Kimon Ioannides, '07, who teaches ninth grade math in New Orleans through Teach for America, recently participated in Northrop Grumman's Weightless Flights of Discovery program. The initiative sends educators on parabolic flights to conduct experiments in a weightless environment. "It made for one of the most exhilarating days of my life!" Ioannides says.

Tyler Bridges, '82, has won a Cabot Prize for outstanding reporting in Latin America and the Caribbean. Bridges, a former Miami Herald reporter, now works as a freelancer based in Lima, Peru. The Cabot Prize is presented annually by Columbia University to journalists whose work "furthers inter-American understanding."

Connie Matsui's job includes developing and marketing drugs for cancer patients, but it was her volunteer work that landed her an award named for a renowned surfer who died from breast cancer. Matsui, '75, MBA '77, won the Rell Sunn "Queen of Makaha" Award for her leadership in breast cancer fund-raising and awareness. Matsui, a cancer survivor, is executive vice president of Biogen Idec.