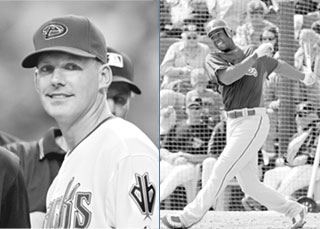 A.J. Hinch was named manager of the Arizona Diamondbacks in May. A former Cardinal All-American, an Olympic team captain and a major-league catcher, Hinch, '96, was most recently the D'backs' director of player development. Naysayers immediately jumped on the fact that Hinch, whose contract runs through 2012, had never coached or managed in any capacity. "I can run away and try to discount them, but the facts are the facts," Hinch told the New York Times. "It'll be a nice challenge that I think we can conquer. It just won't happen in the first 72 hours.

Back when he was a kid hanging around his dad's workplace—which just happened to be the Kansas City Royals organization—John Mayberry Jr. used to imitate Bo Jackson's batting stance, and say he'd be in the big leagues someday. No kidding. Mayberry, '06, hit a three-run homer in his major-league debut May 23 for the Philadelphia Phillies, off of the New York Yankees' Andy Pettitte.

AN ASTEROID BY ANY OTHER NAME

Michele Judd, '87, managing director of the Keck Institute for Space Studies, a joint institute of NASA's Jet Propulsion Laboratory and Caltech, has had an asteroid named after her. Asteroid 185641 "Judd," part of the asteroid main belt between Mars and Jupiter, honors her work as a senior engineer in JPL's science division. 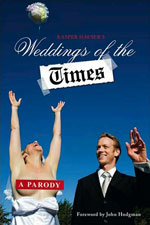 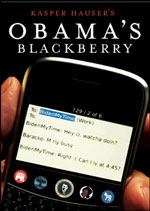 First, there were the sketch-comedy shows. Then, there was the faux catalog SkyMaul: Happy Crap You Can Buy from a Plane. Now, the comedy troupe of Kasper Hauser (Rob Baedeker, '93, Dan Klein, '90, James Reichmuth, '92, and John Reichmuth, '92, JD '96) is looking at love and politics. Weddings of the Times (Thomas Dunne Books) spoofs the New York Times wedding pages. (Among the betrothed: Penelope and Odysseus, bluebloods-turned-tree huggers Purple Delicious and Marmot, and universal-signage favorites Bathroom Woman and Bathroom Man.) Obama's BlackBerry (Little, Brown) imagines the messages on the Presidential smartphone. ("BarackO: guess where I am? Secret Service: lincoln bedroom. BarackO: how about now? Secret Service: map room. BarackO: damn, u guys r good. BarackO: how about now? SecretService: china room. are we done with this? BarackO: k. sorry :( ")

PICTURES AT AN EXHIBITION 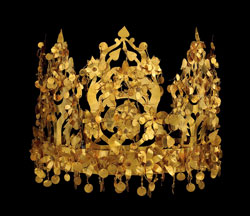 In 2003, after Taliban rule ended in Afghanistan, a team of archaeological experts was dispatched to the presidential palace. It was rumored that during the outbreak of civil war 15 years earlier, Kabul museum employees had hidden the priceless artifacts entrusted to their care in a treasury vault there. A selection of those historical objects comprises the traveling exhibition Afghanistan: Hidden Treasures. Accompanied by a National Geographic film made by Maggie Stogner, MA '83, the exhibition is on view at the Metropolitan Museum of Art in New York City through September 20. Stogner's Blue Bear Films also produced the films that accompany the popular King Tut exhibit, which is at the de Young Museum in San Francisco through March 28, 2010.

A YEAR TO REMEMBER

Carolyn Schwarz, '92, has been named Austinite of the Year in the Austin Under 40 awards for her work providing health insurance to musicians; Jerry Fitzgerald English, '56, has been honored by the Urban Land Institute as Land Use Educator of the Year for her graduate seminar in environmental problem solving at New Jersey Institute of Technology; Rebecca Colton Alleman, '07, has been selected as the New Teacher of the Year for special education by the Clark County (Nev.) School District; Katherine Walker Schlageck, '84, has received the 2009 Governor's Award for Arts in Education for her work at the Beach Museum in Manhattan, Kan.; and Google vice president Marissa Mayer, '97, MS '99, and SLAC professor Helen Quinn, '63, MS '64, were among the five "women in science" honored this year by the Exploratorium, a science museum in San Francisco.