The Artist Formerly Known as Karen 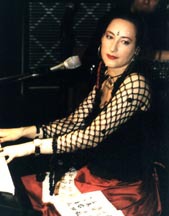 She's played the ultimate girl gig, Lilith Fair, opened for folk legend Ani DiFranco and released her second album, "Smashing the Serene," on her own label. Self-taught singer/songwriter/pianist Rachael Sage -- known as Karen Weitzman in her Stanford days -- is making a name for herself with eclectic tunes and ornate stage costumes. Winner of the 2000 John Lennon Songwriting Contest and a regular performer at New York City's Sidewalk Cafe, she says it's an honor and a challenge to play to live audiences. Says Sage: "It's an opportunity to pin down your essence on a daily basis and uplift people." Rock on.

The Ultimate Comeback for a Frisbee World Champ

The Doctor is Out -- Painting