The Treasure of Mata Ortiz

When Walt Parks first visited the Mexican town of Mata Ortiz in 1984, he found an obscure village turning out astonishing handmade pottery. Today the town's artisans are known around the world. 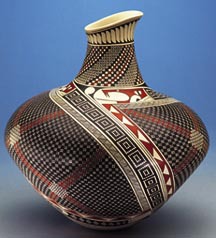 Between his palms Walt Parks cradles a white clay pot about the size of an ostrich egg. He rotates it slowly, displaying an intricate design executed in fine lines of red and black paint. Is it an abstract pattern -- arcs, triangles, zigzags and quadrilaterals? Or does it portray wings, fangs and galaxies? Once, this luminous globe was a mud clod in a Mexican gully. Now, polished smoother than eggshell and nearly as thin, it is exquisite to the touch as well as the eye. An ordinary laborer makes $6 a day in the village of Mata Ortiz, Chihuahua, where the pot was formed. But this double fistful of clay may sell for a thousand times that sum. A signature has been scratched into the bottom: Juan Quezada. Behind that name lies a fabulous tale.

It's the story of a poor woodcutter who transformed himself into one of the most famous artists in Mexico. It's the story of a hungry, dusty village that learned how to sell its dirt. And it's the story of a financial consultant who became a peddler of pots and a connoisseur of cow manure. Since 1984, Walt Parks, '54, MBA '59, has played a key role in the artistic and economic miracle of Mata Ortiz, a tiny adobe town in the foothills of the Sierra Madre, about 80 miles south of the New Mexico border.

Before Juan Quezada, says Parks, Mata Ortiz "was a village with a past but no future. It was a place where old pickup trucks went to die." Now there are new pickups. Men who used to travel elsewhere to work stay home, and women, too, enjoy lucrative careers. More than 300 of the approximately 2,000 villagers are working potters. "I greatly enjoy having these friends," says Parks, "and seeing them grow as artists."

Parks has nurtured that growth. He brings the villagers' pots to the United States to sell, arranges exhibitions and classes, and acts as an unpaid translator and financial adviser. Why? "If you'd had a chance to work with Pablo Picasso in a new art movement, wouldn't you have done it, too?" Parks asks.

The Picasso of Mexican ceramics is widely acknowledged to be Juan Quezada, 59, master potter of Mata Ortiz.

The Mexican state of Chihuahua is the rugged homeland of Tarahumara and Apache Indians, as well as Spanish, Chinese and Mormon immigrants. Remote from Mexico City, Chihuahuans have traditionally prided themselves on their fierce independencia, their valor and their resistance to authority.

In the early 1950s, when Quezada, a second-grade dropout, began gathering firewood in the hills near Mata Ortiz, he found more than sticks. While foraging for acorns, cactus and rattlesnake meat, he also discovered pieces of broken pottery.

A sophisticated pre-Columbian culture had once revolved around the city of Paquimé (also called Casas Grandes), just east of Mata Ortiz. Paquimé dominated the region between approximately 1200 and 1500, and its multistory ruins rival those of Chaco Canyon National Park in northwestern New Mexico. The city was famous for its ceramics, featuring geometric designs in red, black, yellow and brown, which were traded throughout North America. Even in his own backyard, Quezada found ancient pottery fragments -- in both the Casas Grandes style and the still older Mimbres style, characterized by bold black-on-white zoomorphic designs.

Surely, Quezada reasoned, if other people had made pots here, he could too. The local pottery tradition had been entirely lost, but clay was abundant. And so, over many years, Quezada methodically recreated the entire ceramics process, from finding the clay to shaping, painting and firing it. He discovered that pure clay was too brittle, so he studied the edges of old potsherds and solved the problem by doing what his ancestors had done -- adding a coarser temper, such as a bit of sand. He invented a kiln from little more than a flowerpot and came up with an excellent, inexpensive firing fuel: perfectly dry cow chips, produced by grass-fed cows, for maximum heat. Years of searching for a brilliant white clay ended when Quezada noticed ants carrying tiny white balls up from underground.

Working at the kitchen table, he coined a homey vocabulary for his work. Each Quezada pot has a flat clay foundation, called la tortilla. On top goes a plump coil -- el chorizo (the sausage) -- from which the pot's sides are built. To describe the sound of a tap on a well-fired pot, he says, "It sings."

The method he devised involves no wheel. The thin, symmetrical vessels typical of Mata Ortiz are essentially pinch pots. Mata Ortiz potters use only natural materials and the humblest of tools, such as hacksaw blades and broken spoons. Delicate brushes are made from children's hair.

By the early 1970s, Quezada's pots were selling for as much as several dollars apiece. He began to teach his valuable new skill to his brothers and sisters. Next, it spread to the younger generation of Quezadas, then to friends and neighbors. Following Quezada's lead, other potters moved quickly from copying designs from prehistoric potsherds to creating strikingly original motifs. Today, innovation is their tradition.

Pottery brought the whole village the opportunity for a better life. But as time went by, it became clear that the value of the pottery was greater than money. Sometimes pottery was art.

Marketing the pots was still difficult in 1984, when Quezada first met Walt Parks. That summer, the potter was teaching at Idyllwild Arts, a fine arts center near Palm Springs, Calif. Parks, a business consultant to the center, became fascinated by Quezada's story and work.

Pottery had been a longstanding interest for Parks and his wife, Betty, '54, who is herself an accomplished potter. Their involvement began in 1954 when Parks, sent to Japan by the Navy, received a letter from his mother asking for "a piece of Mr. Hamada's pottery." "I was a college graduate," says Parks. "I thought I knew everything, but I'd never heard of Mr. Hamada. My mother knew all about him, though, because she'd studied pottery in Los Angeles in the 1940s."

So Parks set off on an odyssey that led to a meeting with Shoji Hamada, a "Living National Treasure" of Japan. "He touched the clay," Parks remembers, "and there was a teapot." Walt and Betty Parks now own the pale brown Hamada bottle decorated simply with a sugar-white x ("like a hot cross bun," says Parks) that he brought home for his mother almost half a century ago. The Parks pottery collection includes examples from 20 countries. But the majority come from Mata Ortiz.

Since 1984, Parks has made more than 50 trips to Mata Ortiz. He was not the first American to promote the town's art, but he has been one of the most dedicated. In 1993, he published the first book-length study of the pottery phenomenon, The Miracle of Mata Ortiz (Coulter Press), and he continues to write and lecture on the subject. Although he describes himself as merely an observer, Parks has volunteered his business skills for Quezada and the other potters. Above all, he has brought their work into the American market, organizing dozens of sales and shows. "In the beginning, we struggled," says Parks. "But from 1999 through 2001, there will be 16 major museum exhibitions of Mata Ortiz pottery in the United States and Mexico." Current and upcoming shows include exhibitions at the San Diego Museum of Man (through September 4) and the New Mexico Museum of Fine Art in Santa Fe (June 23 through September 17).

Widespread appreciation of the Mata Ortiz potters has led to higher prices for their work. The best pieces now sell for thousands of dollars, though beautiful pots are available for as little as $5. When asked once by a reporter why his work is so expensive, Quezada replied, "Pues yo creo que sí lo vale." ("Because I believe it is worth it.") Collectors seem to agree. Owners of Mata Ortiz pottery now include many Mexican dignitaries, the Pope, Supreme Court Justice Sandra Day O'Connor, '50, JD '52, and Texas First Lady Laura Bush.

Helping the potters get this recognition has been rewarding, but arduous. "The distances were awesome," recalls Parks, who is semiretired and lives in Riverside, Calif. "Buying, selling, packing, unpacking, transporting and negotiating all were expensive, time consuming, and often frustrating. I did it because it was a special privilege to be involved with a great artist."

Mexico does not designate "Living National Treasures," but it does give a national prize in the arts and sciences. In 1999, Quezada won the prestigious award. Parks stood in the Palacio Nacional in Mexico City, watching as President Ernesto Zedillo gave Quezada a gold medal and two shoulder-thumping abrazos. In true Chihuahuan style, Quezada tipped his cowboy hat to the president, but refused to remove it for the ceremony.

"Later," says Parks, "we passed from the grand salon into the room that was once the private quarters of legendary President Benito Juárez, now a museum, but still a sacred place for Mexicans." A great 19th-century reformer, Juárez is Mexico's national hero -- something like a Zapotec Abraham Lincoln.

And there, for the first time, Quezada took off his hat.

A native of Chihuahua, Mexico, Susan Lowell, '72, MA '74, is the author of seven books for children and two for adults.

Walking on the Glass Ceiling