To protest U.S. stem-cell policy, entrepreneur Jim Clark rescinded more than a third of his gift to Stanford's Bio-X program. How does the University account for it? 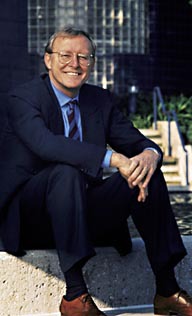 For months, construction crews along a stretch of Campus Drive between the Medical School and the Science and Engineering Quad have been moving dirt and making noise, scooping out a hole that two years from now will be full of building. Architecturally and thematically, it will be unlike any edifice Stanford has ever laid mortar on. Strange and perhaps wonderful things will go on inside. Officially, it will be known as the James C. Clark Center for Biomedical Engineering and Sciences. In Stanford shorthand: Bio-X.

It may also be known as the building that almost wasn’t.

In a stunning move that knocked University officials off balance for weeks, famed entrepreneur Jim Clark—founder of Netscape, Silicon Graphics, Healtheon (now WebMD) and myCFO—announced in late August that he was pulling the plug on more than one-third of his $150 million pledge to the Bio-x program to protest Bush administration policy on stem-cell research. And he did it in a very public way—on the opinion page of the New York Times.

“Congress and the President are thwarting part of the intended purpose of this center by supporting restrictions on stem-cell research and cloning,” Clark wrote in the August 31 issue. “While only a portion of Stanford’s plans involve stem cells, I believe research that uses them is vital to the future of medicine. I’m therefore suspending $60 million of my remaining pledge pending the outcome of ongoing political deliberations.”

On the final day of its fiscal year, Stanford’s long-term balance sheet had been dramatically altered. More to the point, Clark’s decision threatened to trip up a toddling program trying to find its legs.

Stanford officials first tried to talk Clark out of it. President John Hennessy, who as provost in 1999 had convinced Clark to make the gift in the first place (the two were colleagues when Clark was a Stanford professor in the 1980s), tried to keep his old friend from jumping ship. He partially succeeded. Clark, who had agreed to pay the pledge in five annual installments of $30 million beginning in the fall of 1999, informed Hennessy in mid-August that he would honor only the first two years of his commitment. Such a move would jeopardize not only the Bio-X program but the Clark building itself, Hennessy pointed out. Estimated to cost about $146 million, the Clark Center is being financed by $70 million from Clark’s gift, $60 million from an anonymous donor and additional smaller gifts. Clark relented and agreed to fulfill his 2001 payment, but not payments due in 2002 and 2003. (The remaining $20 million from Clark’s gift is being used to hire new bioengineering faculty, purchase equipment and fund Bio-X research.)

Though stung by the loss of $60 million, Hennessy was careful not to sound ungrateful for a pledge that, even when reduced, is one of the largest in University history. “While we are saddened by Mr. Clark’s decision, we are deeply grateful for the $90 million he already has committed,” Hennessy noted in a public statement.

In an interview a month after Clark’s announcement, Hennessy said he was not optimistic that the money would be restored unless U.S. policy on stem-cell research changes. “Jim was pretty clear about that,” he said. The policy, outlined by President Bush in a speech to the nation on August 9, restricts federal funding for embryonic stem-cell research to the existing 60 stem-cell lines already developed by scientists. Although some researchers saw this as a partial victory—many feared Bush would prohibit any federal funding for stem-cell research—Clark believed the policy would steal the oxygen from a promising but still immature field. “Having taught electrical engineering at Stanford and benefited there from federal research funds, I can say that with no prospect of federal support, significant scientific inquiry in a field like stem-cell research will stop,” he wrote. “No research leader can forgo federal money.”

Hennessy concedes that Clark has a point. “Federal funding outstrips private funding by a factor of three to four. Private funding can never replace federal funding,” he says. Private money usually can only provide seed funding for new projects, which is exactly what a portion of Clark’s gift was intended to do. Sixty million dollars had been earmarked as endowment, income from which—based on a return of 5 percent a year—would have produced an annual $3 million project fund for Bio-X initiatives. Anticipating this, the University this year distributed a total of $3 million to 19 Bio-X project teams. They are one-time grants— “bootstrapping money,” Hennessy calls it—meant to jump-start the program and develop momentum, but long-term research would depend on attracting funds from government sources.

“What we lost were the program funds,” says James Spudich, PhD ’68, a Bio-X co-founder and chair of the program’s executive committee. Without that money, he says, Bio-X cannot commit to any new projects. “We’re on hold.”

Although Hennessy has assured faculty that all current grants will be fulfilled, and research is progressing, administrators already are looking for new donors to rebuild the Bio-X endowment.

Clark's motivation has been the source of speculation and discussion ever since his Times op-ed appeared. Several faculty members and administrators have privately expressed bewilderment about Clark’s emphasis on stem-cell research in his decision to hold back part of his Stanford pledge. Stanford’s leading stem-cell researcher, Irving Weissman, has never met Clark. Weissman, MD ’65, whose revolutionary work with adult stem cells has led to promising therapies for breast cancer, is not involved in embryonic stem-cell research, the principal focus of U.S. policy. And Stanford is not a leader in that field, according to Weissman. In fact, he says, “we’re way behind.”

Stem-cell research, while undoubtedly important and potentially pathbreaking, says Hennessy, is not the backbone of Bio-X or even its most prominent research area. “Most of the activities planned for Bio-X and the Clark Center will be unaffected” by Bush’s policy on stem cells, he says.

Clark, who declined to comment for this article, has also turned down other press queries asking him to elaborate on his position. However, comments he made shortly after announcing his gift back in 1999 make clear his interest in bridging academic science with entrepreneurial opportunities and getting maximum impact from every dollar he donates. “For me, it’s important to know the gift is going to get the best leverage it possibly can,” Clark said when he made his pledge. “If you’re allowed to be in an academic setting and create the springboard of a business effectively without undue impediments, then you have an obligation to respond in kind.” The Bush policy may have dampened his expectations that Bio-X would spawn commercial spinoffs or generate enough government funding to maximize the effect of his own dollars.

“Restricting stem-cell research for even a few years simply means that scientists in the United States will not be pioneers. Others will own the patents and claims, and a new pharmaceutical industry will thrive elsewhere,” Clark wrote in the Times.

There has been no indication that Clark was unhappy with Stanford. Asked whether Clark’s move was influenced by displeasure about something Stanford had or had not done related to Bio-X, Hennessy replied: “No. It was strictly the policy.”

Since its splashy introduction in 1999, Bio-X has suffered from a weak and often confused perception of it by students and alumni and even some faculty. Lacking a physical home and based upon a somewhat nebulous collection of faculty collaborations, Bio-X seems ephemeral. What is it, exactly?

Bio-X is an attempt to fully realize what the combined efforts of Stanford’s best minds in engineering, biosciences and medicine might produce. Its goal is to harness this collective prowess, to hardwire such collaboration into the University’s academic culture, and build a robust research engine that not only will crank out important discoveries but will apply them in ways that fundamentally change how long and how well we live.

Although medicine, engineering and the natural sciences have historically lived separately—divided both literally and metaphorically by the “Campus Drive moat”—there is widespread recognition that each will move farther and faster with help from the others. For example, a neuroscientist studying brain patterns needs sophisticated equipment—functional magnetic resonance imaging, in this case—and engineers know the technology. By working together, they might advance research by developing new technology or find an application based on a new understanding of how the brain works. Bio-X will be the vehicle for fully integrating bioengineering and medical sciences—“bridging the moat,” as Hennessy puts it.

The hoped-for product is a constantly bubbling cauldron of gee-whiz research on the frontiers of science. This may involve applying innovative engineering to produce medical solutions—say, Krishna Shenoy’s work on developing a robotic prosthesis that performs like an actual human limb; or it may be uncovering mysteries about basic human functions, such as David Heeger’s research on brain behavior related to vision; or employing techniques that manufacture human tissue—and someday, maybe, entire organs—that can be transplanted in diseased patients. The kind of stuff Jim Clark referred to in his Times article as “a new future for medicine and biology.”

When it is completed in 2003, the Clark Center will be the hub for this activity, but the research already is under way. In many cases, faculty engaged in this research had embraced the idea of Bio-X well before there was a name for it or plans to put a building around it.

Last year, partly on the strength of the University’s commitment to Bio-X, a team of 10 Stanford faculty members was awarded $5.3 million by the Defense Department to explore ways in which cell biology and genomics might be applied to electrical engineering. Understanding how cells communicate and develop might provide engineers with ideas for designing intricate electronic circuits, for example. “This is Bio-X personified,” says Lucy Shapiro, professor of developmental biology and a member of the project team.

Steven Block, professor of applied physics and biological sciences, is an enthusiastic advocate of what Bio-X represents, and his research on DNA reflects that. “We work on a single-molecule level, but the technology we use involves lasers and microscopes and computers and optics,” he says. “Most of the students who are drawn to my lab come out of the physics and applied physics departments. They really have to have the chops to be able to program computers and design optics, things that biologists can’t do. And yet we solve problems that most biologists are very interested in.”

The Clark Center location capitalizes on the geography of Stanford’s science, engineering and medical schools, which are all contiguous to Campus Drive and within easy walking distance. “Proximity is 80 percent of the game,” says Block. “You have to be near the people who are offering this in order for this synergism to occur.”

Currently, eight broad areas of research have been identified for Bio-X. They include biocomputation, genomics, tissue engineering, systems and cognitive neurosciences, biodesign, molecular biophysics, microbial biofilms and biorobotics. Some faculty are pushing for a more focused approach, a “big idea” thrust that would galvanize support and make it easier to attract future funding. Bio-X’s promise could be threatened, said one faculty member, if it becomes “the Noah’s Ark of science.”

Until the Clark Center is ready, existing spaces are being used to establish labs with state-of-the-art equipment where faculty from engineering, medicine and the natural sciences can work side by side. Last year, with $7 million in start-up money from the University, Bio-X established 17 such “shared facilities” in various locations.

In January, Bio-X will play host to its first annual symposium, and there is talk of eventually developing degree-granting programs under the Bio-X banner. But right now, the emphasis is on pushing through this recent setback. “It won’t be easy to replace $60 million,” says Hennessy, “but this is too important to Stanford to let that stop us. We are committed to the success of Bio-X. We will find a way.”

With Divine Secrets , a young producer takes a giant step.