With Divine Secrets , a young producer takes a giant step. 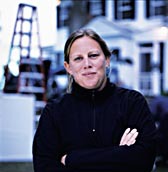 Lisa Stewart is exhausted. The Los Angeles resident is on month three in North Carolina as executive producer of the movie Divine Secrets of the Ya-Ya Sisterhood. For two 13-hour days, Stewart and her crew have filmed actress Ashley Judd playing a mother who, in the midst of a breakdown, drives her kids outside into a downpour and beats them. They will need 132 takes to cover the scene.

“It was hard to watch, and it was hard to choreograph with a 6-year-old, an 8-year-old and a 10-year-old,” Stewart says later. The mood on the set intensified when 80-degree temperatures suddenly dropped to around 50, and warm, manufactured rain mixed with a real, ice-cold torrent. For each take, Stewart, ’86, helped shepherd the kids inside, making sure their hair was blown dry and their feet stuck in warm water. Just as importantly, “I would keep talking to their mothers to make sure they were okay. You don’t want to take advantage.”

That touch of concern in a high-pressure environment is vintage “Stew,” her friends say. One of them is screenwriter Callie Khouri, best known for penning Thelma and Louise (1991). Khouri is making her directorial debut with Divine Secrets, scheduled for release next July, and it is Stewart’s job to give her a smooth start in her new professional incarnation.

Khouri recommended Stewart for the assignment, but Warner Bros. and the project’s producers still put her through four interviews. She is executive producer, but says she spent more hands-on time during production than her co-executive producer, who oversaw the film’s budget.

Stewart’s skill lies in overseeing every detail, freeing the director to focus on the storytelling. During the shooting, she scrutinized forecasts of the fickle North Carolinian weather to decide if the next day’s work would be on indoor or outdoor sets. She hired a camera operator and helicopter pilot from New York after local talent muffed an important aerial shot. And after every take, she advised Khouri on whether to keep shooting or move on. “I like making movies,” Stewart says, “because it’s a giant jigsaw puzzle.”

Stewart spent a decade performing this role for the well-known director Cameron Crowe, building a career in the process. She worked as his assistant on the Seattle-based dating film Singles (1992), where she got her first taste of Hollywood. “I was hanging out with Matt Dillon and Kyra Sedgwick. It was a lot of fun. Pearl Jam was in the movie. No one knew them at the time.” Later she was associate producer of Jerry Maguire (1996). On Crowe’s most recent film, Almost Famous (2000), which won him an Oscar last March for best original screenplay, Stewart was co-producer.

“Cameron is a smart, funny, solicitous guy who gave me entrée to so many parts of the process. It was like going to high school,” Stewart says. “But it got to the point where I had to know if I could do something apart from him. His movies are going to get made with or without me. It’s a little like leaving the nest.”

By summer 2000, it was high time for a break anyway. “I was desperate to not work,” Stewart says. “I had not not worked in 11 years.” Stewart’s good friend Jeffrey Carson, ’86, convinced her that escaping Hollywood’s maw required leaving the country. She flew with him to Margarita Island, off the coast of Venezuela, to take windsurfing lessons for a couple of weeks.

Stewart, who still looks like the field hockey and lacrosse player she was at Stanford, quickly mastered the water sport. As Carson slept on the beach, she devoured the book Khouri had handed her before she left town: Rebecca Wells’s Divine Secrets of the Ya-Ya Sisterhood. Stewart was impressed by the strong characters—and, as a prospective producer, a bit cowed by the book’s popularity.

“There’s a rabid fan base out there,” she says. “You don’t want to disappoint them. But [in a film] you have to make changes. I just hope people embrace them.”

Stewart finally returned to the producer’s chair in January 2001 after a four-month hiatus. Together on the set, she and Khouri found themselves hiring lots of women for typically male jobs like grips, camera operators and camera assistants. Although that hadn’t been their intention, it seemed appropriate, given the film’s focus on the frayed relations between a mother and a daughter. “A lot of the guys on the crew joked that they hadn’t been on shoots where they start and end the day hugging and kissing the director and the producer,” Stewart says.

One big day-to-day concern was the threat of writers and actors striking. Though the strikes were averted, the uncertainty forced Stewart and Khouri to keep a frenzied pace. An added complication was that, in effect, they were making three films in one. The story of Divine Secrets begins in the 1930s and ’40s, continues in the ’60s and ends in the ’90s. Ashley Judd plays a teenager in the ’40s and the grown-up mother in the ’60s. Ellen Burstyn then assumes the role in the present. Sandra Bullock portrays the grown daughter of the Judd-Burstyn character. Like the book, the movie switches back and forth between past and present.

The time shifts complicate everything because “you’ve got to change over the women. They have to go from late teens to early thirties,” Stewart explains. Period wigs, expensive and risky, require hours of makeup for each character. And one bad wig can ruin a scene, Stewart points out. “Wigs’ll kill you. I have sat in a movie [theater] a thousand times and thought nothing but, ‘Nice wig.’”

But moviemaking wouldn’t be much fun for Stewart if it weren’t for challenges like tricky hairpieces and losing a lead actor just weeks before shooting was to begin. (She found another.)

What’s next for Stewart? Another longtime friend, Diana Zock, ’86, a former Hollywood production supervisor, thinks Stewart should one day take a turn as a writer and director. After all, she studied creative writing at Stanford. Stewart isn’t taking that bait just now. She is waiting until she has a story she feels she must tell.

“Maybe I’ll put my toe in those dangerous waters one day,” Stewart says. “Right now, I’d like to help somebody else tell their story.”

Ann Marsh,'88, is a writer living in Los Angeles.

Pick of the Flicks

The Actor and the Monk