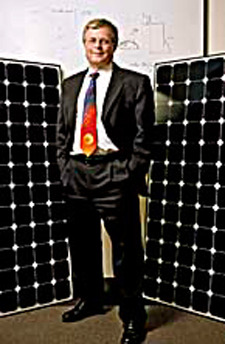 Richard Swanson believed in solar energy when others considered it a folly a hundred times too expensive for the American home.

He believed in solar energy when his start-up company, SunPower, struggled for years, unable to find customers beyond commissions for novelty demonstration projects such as a solar race car. Times were so tough that members of his engineering team took on second jobs. “We had people working for free,” Swanson, PhD ’75, recalls. “They knew the company couldn’t afford to pay them.”

Times change. SunPower is now one of the hottest U.S. companies in a fast-growing global market. The Sunnyvale firm has developed solar cells that are up to 50 percent more efficient than its competitors’—which makes them cheap enough that the typical homeowner would need as few as 10 years to recoup from lower energy bills the cost of installing rooftop solar panels.

SunPower’s solar cell, a five-inch square called the A-300, converts sunlight into energy with an efficiency of nearly 21 percent, compared to the industry average of 12 to 15 percent. Almost as important, its sleek black surface, made possible by a design that puts metal wiring on the back, makes solar rooftops a lot more attractive than the exposed-plumbing look of solar installations from the past.

SunPower’s technological breakthrough won the company a $330 million contract last year to supply its solar cells to PowerLight, the largest installer of solar systems in North America. It also fueled a spectacular initial public offering late in 2005, when SunPower stock rose 41 percent the first day to $25.45. Shares were trading at $38.14 in mid-November.

So Swanson can be forgiven for feeling like he’s finally arrived. “A lot of times, people counseled me, ‘Bag it,’ ” he recalls. But 15 years after he left Stanford’s faculty to launch SunPower, he says the company’s recent fortunes are “a validation for me.’’

In the ’70s and ’80s, Swanson was a professor of electrical engineering working on photovoltaics, the process that converts sunlight (photons) directly into electricity (voltage). The basic engine for photovoltaics is the solar cell, typically a square made of semiconducting materials, including silicon. When the semiconducting materials absorb sunlight, the solar energy knocks electrons loose from their atoms, allowing the electrons to flow through the material to produce electricity. Early solar cells, from the 1950s, had efficiencies of less than 4 percent. That translated into a cost of about $500 per watt.

By the 1970s, advances brought the cost of solar energy down to about $100 per watt. But that was still far more expensive than conventional utility electricity. The oil crisis of 1979, however, underlined Swanson’s conviction that solar power was a better solution than petroleum to supply the world’s demand for energy.

He and Robert Lorenzini, ’58, MS ’59, founder of a company that produced silicon for solar cells, launched SunPower in 1991 with a few backers. For many belt-tightened years, the company got by with research-and-development funding from government agencies and the Electric Power Research Institute. It made a solar-powered race car for Honda in 1996 and solar cells for a NASA unmanned aircraft in 1998. Both projects were successful but too expensive to result in commercially feasible products. 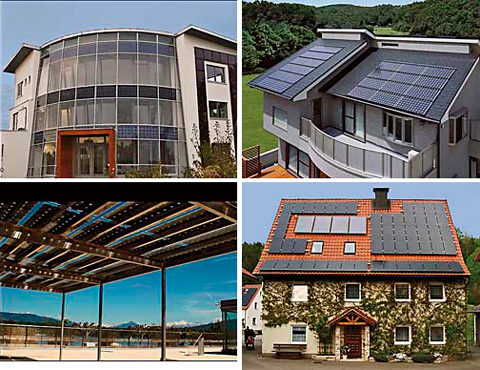 Courtesy SunPower
A LIGHTER LOOK: SunPower panels are integrated into buildings throughout the world.

By 2001, the company was so cash-strapped that Swanson planned to lay off half his four dozen employees. Financiers he approached were wary: the venture capitalists “were still smarting from the demise of the dot-coms.” But one Valley veteran, T.J. Rodgers, listened. Rodgers, MS ’72, PhD ’75, had founded Cypress Semiconductor in 1982 to make computer chips, and he remembered his classmate Swanson, whom he calls “a brilliant technologist.” Rodgers remembers thinking, when Swanson approached him, “The time for solar energy has arrived.’’

Cypress invested $8.8 million in SunPower for a 44 percent stake in the company that later was increased to a majority interest. By 2004 the company’s new A-300 cell design had brought the cost of solar energy down to under $10 per watt, in part because putting the wiring on the back of the cell maximized the cell’s working surface and made automated production easier. SunPower’s manufacturing takes place at a plant in the Philippines.

The solar equipment market is projected to jump tenfold from $1 billion in 2010 to $10 billion by 2020, Swanson says. While this makes for heady times for SunPower, Swanson recognizes the challenges ahead. The firm faces global competition from such giant companies as BP, Shell, Sharp and Sanyo. A shortage of silicon is complicating the task of keeping costs low. Jesse Pichel, an industry analyst at Piper Jaffray, said SunPower is positioned to handle this better than competitors because its cells use about 30 percent less silicon per watt than the industry average.

Rhone Resch, president of the Solar Energy Industries Association, in Washington, D.C., says Swanson has become a legend within the solar power industry for his contributions to the field. Swanson, however, does not plan to rest on his accomplishments. His “grand vision,” he says, includes building the technology for immense “solar farms,” located in deserts, that would run huge panels of highly efficient solar cells. He thinks such installations in Arizona and California’s Central Valley could provide most of the energy needed by Sunbelt cities. “It could happen in the next 50 to 100 years.”

DONNA ALVARADO is an editor at the San Jose Mercury News.

When Bishop Katharine Jefferts Schori broke a 500-year gender barrier, many applauded. Those who didn’t represent her biggest challenge.