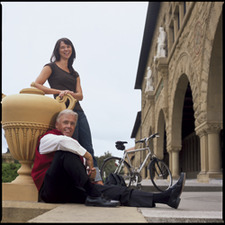 It was a horrible and especially untimely accident. A Stanford equestrian, headed for the Olympics, took a bad spill and her horse landed on top of her. "There were nasty fractures, and she literally had a hard time getting back on her horse," says Hans Steiner, professor of psychiatry and behavioral sciences. "Clinically, she had post-traumatic stress disorder."

Steiner was able to help the young athlete professionally, and her accident had a lasting impact on his research into resiliency in stressful situations among student-athletes. "They're in this intense fitness training, and all of a sudden—boom!—everything's on hold. Half of their life goes to hell," he says. Injuries, he adds, are "all treatable and manageable, but you need to know [that]."

Steiner has been teaching a seminar for more than 10 years that draws student-athletes and the occasional ballet dancer. He enlists a former athlete to TA the class each year, and the course title changes, depending on the emphasis. Last year, Psych 78Q was offered as Mental Health in Women Athletes, TA'd by basketball guard Katie Denny, '04, MA '05.

The former psychology major will be applying to graduate school this year, but before she leaves the Farm, Denny wants to launch a mentoring program for players. "Sports is what you do, day in and day out," she says. "It's one of the biggest factors in your life, and a handful of people have a really tough time." Denny thinks she could offer them some help, drawing on her own experience and on the research in emotional regulation in stressful situations that she conducted with Steiner for her master's degree. "Everybody can learn ways to deal a little bit better."

As part of her research last year, Denny interviewed 48 members of the tennis, gymnastics, men's basketball, field hockey, cross country and lacrosse teams about the most stressful events they had encountered. Denny hopes to launch her mentoring program with a presentation to the women's tennis team. She envisions a conversation along the lines of, "I want to be a mentor if you have a hard time, and I'd like to be able to help you. These are the services offered, and don't hesitate to get in touch."

Steiner has no illusions about the reception Denny may encounter on some fields. "Certain coaches are very open to these kinds of remedies, and certain coaches are closed," he says. "Some look at you as if you're from Mars and say, 'If we do this, we'll be the sissies of the Pac-10.' But I think if it comes from within the student population, with people like Katie and her friends pushing it, that's when it's going to happen."

Denny has talked with athletics director Bob Bowlsby, and received his okay to approach coaches about her mentoring program. "Katie's theory is interesting, and that is why I approved the pilot work," Bowlsby says.

The demands on athletes' time are staggering, and Steiner says that when an injury occurs, the emotional toll can be multiplied exponentially. "What will happen is that a kid gets hurt and is in rehab, and the coaching staff is missing his presence on the team," he notes. "There's all this pressure on the coach to cough up a trophy, but he's missing his key player, and that pressure trickles right down to the injured athlete, who thinks, 'What am I going to do?' So as the kid is recouping, there's a massive amount of pressure, from all directions."

Denny says that injured athletes are quickly referred to team doctors and physical therapists, but often are less familiar with the mental health resources that are available. As a mentor, she says, she could "direct them to professionals."

"I can't imagine anything more fun than being a Stanford student-athlete, but there are also big risks," Steiner adds. "As long as you know about them, and go into it with open eyes, you can manage it."