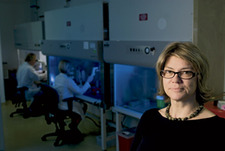 Whether she's chatting with a real estate agent in Palo Alto or talking with a cell biologist in Australia, says Renee A. Reijo Pera, "people recognize that what California has done is unique."

She's referring to the California Institute for Regenerative Medicine, a state agency created in 2004 by the passage of Proposition 71. CIRM will award $3 billion in grants for stem cell research during the next 10 years. Stanford already has received almost $26 million, more than any other single institution.

"The CIRM funding is important for the money, and also in terms of psychology," Reijo Pera says. "It feels like you're joining something bigger than yourself, and that's always attractive to scientists—that there's this statewide experiment to see if we can really make human embryonic stem cells into some sort of useful, novel therapeutic." She pauses, gazing out the window of her lab, which overlooks a beautiful rose garden and a flourishing vineyard beyond. "It's the same type of mentality people had in the race to the moon."

Reijo Pera, 47, a professor of obstetrics and gynecology, last spring was named director of human embryonic stem cell research and education for Stanford's Institute for Stem Cell Biology and Regenerative Medicine. Previously, she had worked for 10 years at the University of California-San Francisco, where she helped establish a human embryonic stem cell research center. Pera brought to the Farm her lab of 15 researchers, and a palpable sense of excitement.

"We've done big scientific projects that have to do with linear acceleration of particles, or putting spacecraft into space, but what's interesting is that we've never really explored our own origins, our own development," she notes. "This is a great exploration time that I refer to as 'the search within.'"

Reijo Pera draws a gamete on her wall whiteboard. "For anybody who spends two seconds thinking about it, the fact that an egg and a sperm fuse, and you get an embryo and a fetus and a child, is actually incredibly amazing." Human development, she explains, happens a cell or a tissue at a time, and there's an instruction manual, or plan, in the human genome that makes each of us unique. "We're not flies, or worms, or mice, or anything else," she says with emphasis. "We're very unique, and this really is a new day for understanding that complexity."

Stanford's institutes of medicine previously have been known for work with adult stem cells, largely thanks to the pioneering efforts of Irving L. Weissman, MD '65, who directs the umbrella Institute for Cancer and Stem Cell Biology and Medicine. With Reijo Pera's lab, the University expects to take a leading role among the handful of American institutions—Stanford, UCSF, Harvard and Columbia—doing research on embryonic stem cells. Specifically, Reijo Pera studies the information in human DNA that directs development of the embryo in the first 12 days, and her lab hopes to design new stem cell lines that can be used to treat disease.

"I'm in obstetrics and gynecology because a lack of information continues to hurt women," Reijo Pera says. "Women [who are infertile] are implanted with multiple embryos because we know nothing about what a good embryo is, and so we have to put in many, to bypass the lack of knowledge." Often, in vitro fertilization results in miscarriages, birth defects and fetal reduction. "The media always report 'five healthy quintuplets just born,' but mostly there are two born and three miscarried." Reijo Pera describes herself as "quite a religious woman. I'm convinced that there is no inherent wrong in examining an embryo," she says. "And if you look at the people in my lab, there's really a sense of awe, almost of a spiritual nature, that this is not a slight undertaking."

Because her lab works with fertility-clinic embryos that would otherwise be discarded, Reijo Pera argues that "the actual ethical issue is whether to throw them away without using them, or to use them." The researchers in her group are "good people doing good research," she adds. "It would be a terrible thing to throw away embryos without learning anything."

More than 90 percent of embryonic stem cell biologists worldwide study mice as a so-called "model system," Reijo Pera says. But with high-profile universities now investing in human embryonic stem cell biology, she suggests that the research platform is changing in significant ways. "It's quite a difference in science, from a reductionist, 'Let's reduce everything to a basic plan,' to 'Let's embrace the complexity, let's understand ourselves.' And this has really only happened over the last five years."

The young scientists she is hiring today are "not content to think about model systems," Reijo Pera notes, "but want to tackle the big problems—where they come from, how we get a human from a sperm, how things are formed."

Progress in understanding human development would be greatly advanced, she says, "if we could get a certain honesty about the issues and a sense of clarity about what is really being done—and depoliticize it." Instead of mixing up embryonic stem cell research with right-to-life issues, Reijo Pera wishes critics would understand that there is "an absolute line" that is never crossed: embryos are never grown past 12 days. "It never happens—one, for ethical reasons, and, two, because it's impossible, because [the embryo] would have to be hooked up to the mother's blood system."

When President George W. Bush vetoed legislation in June that would have allowed federal funds for embryonic stem cell research, he argued that "promising new techniques" might allow scientists to derive stem cells from amniotic fluid or placentas, rather than from human embryos.

"I'm the most firm believer that there will be alternative ways to make cells," Reijo Pera says. "But at the end of the day, we are going to have to understand our own development. If you have no knowledge about early human development, you're always driving in the dark, with no ability to see where you're going."