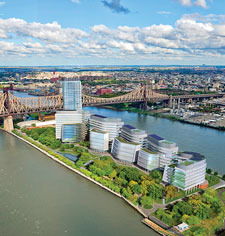 After months of preparation, discussion and planning, Stanford on December 16 withdrew its proposal to build an applied sciences and engineering campus in New York City, citing new requirements made by the city that University officials said would have jeopardized the success of the project.

The University's proposal was one of the shortlisted seven responses, representing 17 schools, answering Mayor Michael Bloomberg's invitation to vie for free land and other inducements to establish a world-class research center that would foster innovation and spin out new businesses. Stanford saw it as an opportunity to educate more students without expanding the main campus; strengthen its presence on the East Coast; attract students and faculty it otherwise could not; and help develop a Silicon Valley-like technology hub. Dubbed StanfordNYC, the University's plan called for a $2.5 billion, 1.9 million-square-foot campus on a 10-acre parcel on Roosevelt Island donated by the city. It would have been built over a 30-year span and focused on graduate-level teaching and research in engineering, technology and entrepreneurship. Stanford was prepared to commit an initial $200 million toward the venture to cover startup costs and an endowment to support research. When complete, the campus would have housed more than 200 faculty members and more than 2,000 students.

In early December, President Hennessy, Stanford faculty members and other campus officials traveled to New York to meet with staff from the city's economic development corporation, which issued the request for proposals. In negotiations with a smaller Stanford team over the following two weeks, the city introduced additional demands that Hennessy said increased the risks and costs for Stanford and decreased the potential benefit.

Among them was a partial retreat from New York's promise of up to $100 million in infrastructure improvements on Roosevelt Island. Additionally, the University was asked to indemnify the city against any environmental cleanup costs or liability stemming from toxic materials found at the site after construction began. Those stipulations, in combination with other requirements that differed from the original proposal—penalties for missed construction deadlines, for example—compelled the Board of Trustees to authorize Hennessy to walk away from the project. "I told the Board of Trustees this is a great opportunity, but with a series of risks associated with it. The fact that we had pre-decided what would be the walk-away points was critical in that process," Hennessy said.

The New York-based attorneys, architects and consultants hired by Stanford have vast experience working within the city's regulatory and political framework, noted Hennessy. "We got very good advice from people who have done numerous deals with the city. Their advice was not encouraging about continuing the negotiations."

Some media reports suggested the University pulled out because Cornell, which teamed with Technion-Israel Institute of Technology and was eventually awarded the project, had eclipsed its bid. New York's Daily News asserted that Cornell "elbowed Stanford out of the way" on the strength of a $350 million donation announced on the same day that Stanford withdrew. But University spokeswoman Lisa Lapin says Stanford had already pulled the plug before that donation was announced. "We didn't even know about the gift when we made our decision," she said.

Alan Rorie's cerebral creations challenge viewers to think of science as a process.

Lumosity challenges your brain, hoping to make it stronger.

Between gigs, a Stanford man takes time for reflection and not just in the mirror.