When people spoke with Laurie Hoagland about complex investment decisions, they were often met with a pause. “You’d be sitting across from his desk, and there’d be two minutes of silence while he just thought through it,” says Paul Brest, former dean of Stanford Law School and former president of the William and Flora Hewlett Foundation. 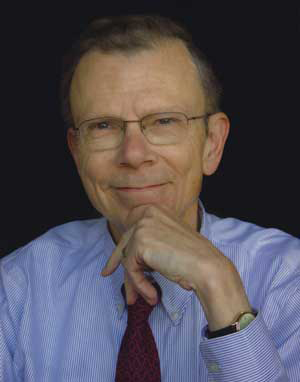 While Hoagland listened and thought deeply, his work spoke for itself. During the economically volatile ’80s, he increased assets at his St. Louis investment firm from $7 million to $300 million. That success earned him an interview for the position of founding president and CEO at Stanford Management Company (SMC), but it wasn’t his shrewd investment strategies alone that got him the job—it was also his dedication to Stanford. One of 13 Hoaglands to study on the Farm, he was the sort to make an appointment with the university president—as an undergrad—to assess whether he might one day want to lead a college himself. Then he refined his goal. “When he was 25, he said, ‘My dream would be to manage some money for Stanford someday,’ ” recalls his wife, Grace “Gay” Hoagland, ’59. He thought supporting the university’s scholars would improve the world.

Laurance Hoagland Jr., ’58, who helped transform the field of university endowment investing, died on April 24. He was 85.

When Stanford’s treasurer and endowment manager died in 1991, university leaders decided to form a management company to oversee its endowment and real estate holdings. As its inaugural CEO, Hoagland saw an opportunity to mix things up. While other university endowments were invested primarily in U.S. stocks and bonds, Hoagland became one of the first to diversify with international investments, real estate, private equity and—most boldly—venture capital. “For university endowments and big nonprofit endowments, he changed the name of the game,” says economics professor emeritus John Shoven. During Hoagland’s nine years of leadership, the main invested portion of Stanford’s endowment grew from $1.9 billion to $8.6 billion.

At SMC, Hoagland surrounded himself with Nobel Prize–winning economists and future industry powerhouses, including many women leaders (a rarity in the field at the time). With intellectual heft behind him, he had confidence in his unconventional ideas. He left SMC in 2000 and, in 2001, assumed responsibility for the Hewlett Foundation’s endowment, where he navigated difficult conversations as it divested from much of its Hewlett-Packard stock, committing instead to a diverse portfolio that could sustain the foundation over the long term. During his 12-year tenure at the foundation, its holdings grew from $3.7 billion to $7.8 billion, and it distributed $3.9 billion in grants.

In many ways, Hoagland’s thoughtful approach to investing was an extension of those protracted conversational pauses. “Once you knew him well enough,” says former CIO of SMC Anne Casscells, MBA ’85, “you knew that you should just wait through those silences because he was thinking, and whatever was going to come out of his mouth was well worth listening to.”

‘A Consensus Builder by Disposition’

What Stephen Breyer’s clerks have to say about the justice and his legacy.