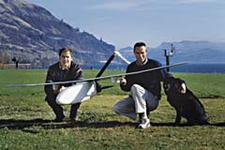 Washington D.C., March 2012: The newly inaugurated president of the United States and her national security advisers urgently need current information about a developing crisis in the Middle East. Lacking on-the-ground intelligence and unwilling to risk manned reconnaissance flights, they approve a plan: dozens of unmanned aerial vehicles (UAVs) will be launched from ships in the Gulf of Oman and from an American Army base in Eritrea. Over the next three days, the aircraft—bristling with cameras and sensors and controlled by on-board computers—will intercept cell-phone conversations, observe troop and equipment movement and watch for any flow of refugees. They will monitor local weather, sniff the air for traces of chemical and biological weapons and send the data via satellite to U.S. command posts in the region.

That scenario may read like something from a future Tom Clancy thriller, but the people working to make it possible are more likely to be found windsurfing on the Columbia River than rubbing elbows with Pentagon types.

In a nondescript building in rural Washington state, three alumni of Stanford’s program in aeronautics and astronautics, Tad McGeer, Steve Sliwa and Andy von Flotow, are helping develop a new generation of pilotless aircraft that could revolutionize not just military intelligence gathering but commercial fishing, wildlife management and weather forecasting.

The Insitu Group, founded by McGeer in 1994, is a leader in the burgeoning field of UAVs, miniature robotic aircraft whose programming makes them virtually autonomous. Typically lightweight—they can easily be carried by two people—these craft are highly durable and capable of flying thousands of miles over several days. They resemble oversized model airplanes, but their toylike appearance belies the sophisticated technology housed inside: the fuselage is crammed with data-retrieval and communications equipment.

The UAV—small, smart and versatile—is a pretty good metaphor for Insitu itself. Located on the Columbia River in Bingen, Wash., a town of 800 about 50 miles east of Portland, Ore., the company has fewer than two dozen employees. Insitu’s chairman and chief technology officer, McGeer, PhD ’84, is a former robotics professor at Simon Fraser University in his native British Columbia, and a licensed pilot. Von Flotow, PhD ’84, who sits on the Insitu board, taught at MIT for five years and founded Hood Technology, across the river in Oregon. Sliwa, PhD ’84, MS ’89, is Insitu’s president and CEO, and also a pilot. Previously, he worked at NASA’s Langley (Va.) research center and was president of Embry-Riddle Aeronautical Institute in Florida.

It turns out a small town next to a big, beautiful river is an ideal spot for a high-technology company. “Andy moved here because of the windsurfing and Tad came here to work with Andy and liked the area,” Sliwa says, noting that windsurfing’s physical and technological challenges make it popular among engineers. “We’ve had some opportunities to move to Seattle, but we don’t have any trouble recruiting people.”

The company already has made aviation history. In August 1998, its 29-pound, $10,000 UAV (nicknamed Laima, after the ancient Latvian deity of good fortune) became the first pilotless aircraft to complete a transatlantic flight. Collaborating with engineers at the University of Washington (Juris Vagners, MS ’63, PhD ’67, is a professor emeritus at the school and a member of Insitu’s advisory board), Insitu launched four UAVs from Bell Island, Newfoundland, headed for the British Isles. Powered by custom-engineered, single-cylinder engines, the aircraft were controlled by Insitu’s launch-station operators for the first 20 minutes, and from then on by the planes’ computers. Three of the UAVs failed to complete the trip. But 26 hours and 45 minutes after takeoff, Laima landed on a grassy field on South Uist Island off the west coast of Scotland. It had traveled 2,031 miles on 1 1/2 gallons of gasoline.

“Of all the things we’ve done, the Atlantic crossing was certainly the most important,” McGeer says. “It was a coming-of-age for the UAV.”

Last June, Insitu performed a successful test with one of its newest products, ScanEagle, a UAV developed in cooperation with Boeing. The ScanEagle has a 10-foot wingspan and weighs about 30 pounds. Hurled into the sky from a compressed-air launcher, the plane can cruise at about 70 mph for up to 50 hours. It costs $60,000.

ScanEagle is based on Insitu’s Seascan, which was devised with the tuna industry in mind. Seascan carries a small, gyro-stabilized television camera to spot schools of fish up to 30 miles away.

Among those interested in the development and application of UAVs are the Office of Naval Research and the Pentagon’s Defense Advanced Research Projects Agency (DARPA). Insitu has received four research grants from the Department of Defense.

According to Sliwa, the ScanEagle is an example of how miniaturization allows for new applications of technologies. Packaging the software and hardware that give the aircraft the ability to fly, make autonomous course corrections and land without human intervention, he says, “is like taking the avionics of a 747 and putting them in a Cessna.”

Who needs a pilot?

Thomas McGarry is a freelance writer in Lake Oswego, Ore.

Teachers we remember (and why).

Out of the Ordinary

For one longshoreman, ideas were everything.