What You Don't Know About Dollies 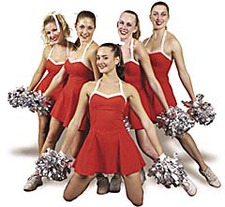 When Stanford asked to interview one of the five women who dance with the Band, the LSJUMB public relations manager demurred. “The thing with Dollies is that they do tend to come as a set,” noted Mike Huijon, ’99. It turns out that the quintet speaks with one voice on almost everything.

Dollies are not cheerleaders. “We’re in a category of our own,” says junior Nevenka Mattenet. “We don’t cheer and we don’t do stunts. We’re technical dancers.” With more than 40 collective years of lessons in ballet, tap, jazz, hip-hop, flamenco, ballroom, Scottish dancing and beyond, the Dollies say their biggest challenge is melding individual styles into one flawless whole. “People don’t realize how much mental and physical effort it takes to practice a dance repetitively and get the five of us to look identical,” says sophomore Malia Skaer.

Dollies work hard. The Dollies practice for two hours daily and rally at a minimum of three events per week, on campus and for elementary schools, church fairs, alumni birthday parties, weddings, Special Olympics and congressional candidates. They learn traditional Dollie dances—such as “Bill Tell,” a.k.a. the William Tell Overture—and choreograph new ones. The Dollies must be prepared to dash into formation each time the drum major flashes one of his 30 hand signals (and those cues can be hazardously similar—an L for “Livin” and a winking L for “Limelight,” for instance).“We dance to everything from Elvis to Green Day, Band-style of course,” says sophomore Valerie Rozycki.

Dollies are not ditzy. “I’m a student, not Nevenka the Dollie,” says Mattenet. “The five of us came to Stanford for strictly academic purposes,” Skaer adds. The women juggle challenging majors—international relations, human biology, management science and engineering, East Asian studies—and extracurriculars in addition to Dollie duties. Rozycki is a volunteer tutor and production director of the Stanford Undergraduate Research Journal, and senior Marisa Dye is on staff at a Row house.

There’s an awful lot of Dolliana. First comes Dollie Day, when each woman has to try out, by herself, in front of the entire Band. (“They got yelled at if they threw food directly at us,” senior Erin Christofferson recalls.) Dollies love Dollie Splash, and practice for two months for their debut and dunking at the Claw. A Dollie Blooper? That’s when the football team scores, the Band’s about to strike up “ARN” (“All Right Now”), and you realize you’re not holding your poms. Not to mention Dollie Daddy, the assistant Band manager charged with the general encouragement and well-being of all things Dollie.

This year’s Dollies are the “sparkly Dollies.” Each cadre has a nickname, and the 2002-03 Dollies get theirs from the Swarovski crystals they’ve added to the traditional empire-waist, flared dresses. Oh, and those are red dresses in the fall, Cardinal dresses in the winter and white dresses in the spring.

The Dollies are categorized as an “accessory” to the Band, along with the Tree. And herein lies the one point of true Dollie disagreement. “I hate that,” says Mattenet. “We’re not.” Counters Skaer: “I think it’s cute, because we don’t play.” Dye chimes in: “An accessory is something that can easily be done away with, like a bracelet.” Skaer gets the final word. “An accessory is something that makes an outfit,” she says. “If we’re talking outfits, we’re more like shoes.”