Six Secrets for Making It Work

Stanford couples share how they balance the demands of relationship and career in a way that's fulfilling for both parties.

Around the time Michael Tubbs, ’12, MA ’12, and Anna Malaika Nti-Asare-Tubbs, ’14, started dating, Tubbs launched his 2012 campaign to become a member of the Stockton, Calif., city council.

That would have been a stressful time for any new couple. But Tubbs was campaigning to become the youngest council member in the city’s history. He was followed everywhere by a documentary film crew; keeping their new relationship private wasn’t an option.

The public scrutiny — on top of Tubb’s rigorous campaign schedule — was a challenge to the nascent relationship. “There were a lot of eyes on us very early on,” says Nti-Asare-Tubbs, who is now working on a PhD from the University of Cambridge, where she also earned her master’s degree. “Neither one of us knew what we were signing up for.” But the pressures they faced made them honest and forthcoming about their goals and expectations early in the relationship. “It forced intentionality,” says Tubbs. “‘Do we want this, or no?’”

They did. Tubbs proposed in November 2016, four years after he won his city council seat and one week after he was elected mayor of Stockton. They were married in December 2017.

Documentary crews aside, partners can struggle to balance careers, couplehood and family. Three pairs of Stanford graduate alumni shared ways they keep their relationships strong in the face of life’s competing priorities.

Pick something to be inefficient about, and do it together.

“Divide and conquer” is a common mantra for busy couples. But counterintuitively, sometimes forgoing efficiency is a way to create quality time together. “It can be a good thing to have a built-in commitment [together] outside of work,” says Jordan Rice. Rice and Greg Schweizer, both JD ’15, have been together since their first semester at Stanford Law School; now they’re litigation associates at different Chicago firms. They have heavy workloads and long hours. So walking their dog, Rudy (named after Rudy’s Pub, a former Stanford hot spot), could easily be a job one does while the other picks up dinner. Instead, they do it together. “A lot of people worry about getting a dog or anything that’s going to limit their flexibility,” Rice says. But Rudy’s walks provide a built-in opportunity to explore and enjoy the city’s green spaces together. 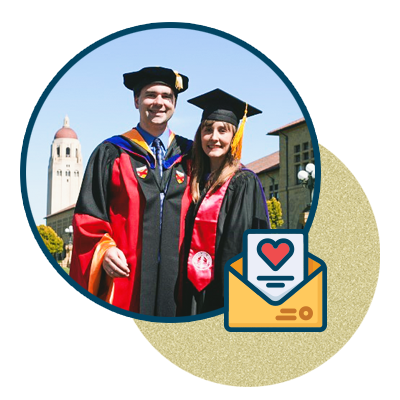 Paul Gurney, MS ’04, PhD ’07, and Jenny Allen, JD ’07OK, maybe not love letters, but how often do you and your partner really talk? Paul Gurney, MS ’04, PhD ’07, and Jenny Allen, JD ’07, know from experience it can be tough to do, especially with children and demanding jobs. Gurney and Allen spend most weekdays apart as Gurney travels for his job as a health-care consultant. When they realized they were going too long without talking about more than to-dos and daily family management, they decided to make a change. (Allen, an information governance attorney, concedes that she may have initiated that change with a “snide comment.”) Now they talk on the phone at least daily, and for the past year, have been emailing weekly. “They’re not quite detailed love letters — it’s just a touching-base message,” says Allen. Gurney adds, “I love getting them and I love writing them.”

Tubbs says one of the strengths of his relationship with Nti-Asare-Tubbs is that they support each other’s individual goals, even though they had to spend most of a year apart during Nti-Asare-Tubbs’ graduate studies. Tubbs says it helps that “there’s never been a time when there hasn’t been a bunch of other competing priorities.” One difficult period, he says, was when he was campaigning for city council and Nti-Asare-Tubbs was still on campus. Once they weathered that, balancing their demanding schedules became “almost very habitual.” 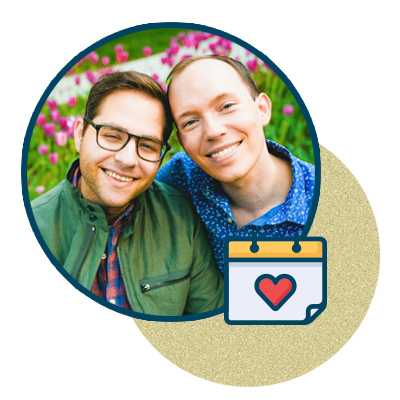 Schweizer and Rice also spent time apart while they were completing clerkships in different states. “You respect each other enough to know what the other person’s dreams are, and you move toward that to the extent you can,” Schweizer says.

Communicate your expectations and goals.

When Allen and Gurney married, they moved to Southern California to be near Allen’s family. After their child was born, they decided Allen would shift from her firm’s partner track to a staff attorney position so she would have a more predictable schedule. “It seemed like a big decision at the time, but in retrospect, it couldn’t have been any better,” she says. Gurney thinks it helped that he and Allen had been up-front about their goals early in the relationship. They knew they wanted children but agreed to focus on their careers and each other for five years. “We had a common set of expectations, so it didn’t turn into a difficult conversation,” he says.

Be open to a new life narrative.

Nti-Asare-Tubbs lived all over the world as a child and expected she would as an adult, too. But when she finished her master’s from Cambridge, she chose to land in the small, Central Valley city of Stockton, where Tubbs was born and raised. It required reframing some original ideas of how life would go.

“I knew I needed to make a decision that was important for our relationship,” she says. “But instead of seeing that as a hindrance, I saw it as beneficial.” Nti-Asare-Tubbs applied her degrees in medical anthropology and multidisciplinary gender studies to her position as the city’s first lady, helping produce the first “Report on the Status of Women in Stockton,” a 110-page document covering everything from education and employment to prenatal care and domestic violence. (For her PhD in sociology, Nti-Asare-Tubbs is exploring the role Alberta Williams King, Louise Little and Emma Berdis Jones played in the lives of their sons — Martin Luther King, Jr., Malcolm X and James Baldwin, respectively.)