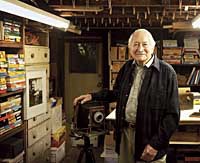 When Leo Holub retired in 1980, it seemed he’d reached the pinnacle of his career. The senior lecturer of photography, emeritus, had studied at the Art Institute of Chicago and the California School of Fine Arts, most notably under Ansel Adams. He’d succeeded as a graphic artist, designer, photographer and teacher, with a circle of friends that included photographers Adams and Imogen Cunningham, artists Nathan Oliveira, Richard Diebenkorn, Ruth Asawa and Frank Lobdell, and writer Wallace Stegner. And he could take pride in his contribution to the arts at Stanford.

Recruited to create a photography program in 1969 by Lorenz Eitner, then head of Stanford’s art department, Holub spent the next 11 years teaching a curriculum that focused on the camera as a means of individual expression. In that time, the program attracted more than 4,000 students, many of whom became influential teachers, curators and photographers all over the country.

But at the time of retirement, the defining project of his career was yet to come.

The seed had been planted unwittingly when Holub took a photograph of Diebenkorn, ’49, in 1963. (The painter was a visiting artist at Stanford that year.) A decade later, Eitner saw the portrait and recognized the Diebenkorn painting that served as a backdrop: he’d seen it in the collection of Harry W. and Mary Margaret Anderson. Eitner then gave the Andersons a print of the photograph. But it wasn’t until another decade had passed that the couple came up with the idea of commissioning Holub to photograph other artists whose works are part of their legendary collection.

So began the 10-year odyssey Holub now calls “the highlight of my life,” during which he photographed a who’s who of 20th-century American artists. Holub, a down-to-earth type, wasn’t starstruck by the luminaries he photographed. But it’s difficult not to be wowed by a roster that includes Roy Lichtenstein, Richard Serra, Ed Ruscha, Larry Poons, Jasper Johns, Ellsworth Kelly, Helen Frankenthaler, Jennifer Bartlett, Robert Rauschenberg, Sam Francis, Wayne Thiebaud and Jim Dine.

“Things just seem to happen to me,” Holub says. “I never went out looking for them, but they would come to me and I was receptive when they did.”

Stanford recently heralded Holub’s 90th birthday with an on-campus exhibition of the Anderson Collection portraits curated by Vivian Crockett and Karla Mei Robertson, both ’06. “They looked at it with fresh eyes and in an interesting way. I’m pleased with what they did with the material,” Holub says. A smaller version of this exhibition will be on view at Stanford in Washington during this winter quarter.

Holub set out to capture the artists in an intimate context—their studios, homes or galleries—that might reveal something about them as individuals. Taking his cues from his subjects, Holub shot portraits ranging from formal poses to candid views of the artists at work. Some appear guarded, others bemused or solemn, and some seem to have forgotten there was a camera in the room—a tribute to Holub’s quiet, understated presence and his ability to establish a rapport.

From the outset, the photographer booked only one-hour appointments. “I did that on purpose,” he says. “I figured those people were busy and had enough demands on their time. I thought if I couldn’t get something within an hour, I was in the wrong business.”

Holub used existing light, and one of his ground rules was to never set up shots by moving furniture or objects around. He made trips to New York in 1986, 1989 and 1992—each for four or five weeks at a time—as well as traveling to Los Angeles and New Mexico. His camera of choice was a 6 x 7 Mamiya. “You can make larger and sharper prints than with a 35-millimeter camera, but it’s not as bulky as a 4 x 5,” he says. Still, he was lugging 45 pounds of gear onto buses and subways and up and down the streets of Manhattan.

“I do all my own darkroom work, so I’d come back [to California] and develop contact prints,” Holub recalls. “I’d send the artists a set of contacts and three or four prints I thought they’d like. We would narrow them down to two or three photos of each artist and those were the ones we would include in the portfolio.” In all, he produced 5,200 negatives of more than 60 artists, arranged in four portfolios.

As one would expect, Holub established more of a connection with some artists than with others. His favorite photograph is of Larry Poons’s studio on Broadway in Manhattan, not far from NYU. Holub admired the artist’s process: “He put up canvas in a circular room and sprayed the paint. Then he cut the canvas up and pasted it on boards.”

Another memorable session was with sculptor Martin Puryear in upstate New York. The artist asked Holub how he got started in photography, and Holub told him he began to pursue it seriously after the birth of his eldest child. Puryear ran upstairs and brought down his own baby daughter, and Holub photographed the two of them. Later, as thanks for the portraits, a gift arrived in the mail from Puryear—a wooden sculpture of the artist’s hand, today one of Holub’s prized possessions.

These days, Holub spends a fair amount of time cataloguing his negatives, contact sheets and prints for the Smithsonian, which he has designated to receive his work. And another exhibition of his portraits and other photographs will take place from January 24 through March 31 at the Himmelberger Gallery in San Francisco.

LINDA WEBER is a freelance writer and editor in San Francisco.