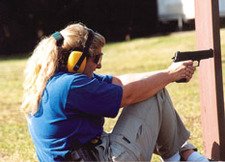 “I like a few shots of excitement here and there,” says FBI special agent Sherry Rice—and she means that literally. A gold medalist in pistol shooting at last year’s Texas Police Olympics, where all her competitors were men, Rice specializes in firearms instruction, counterterrorism and crime-scene investigation. She has been called from her Houston base to comb through high-profile disaster sites including Nairobi (2001 embassy bombing), Staten Island dump (September 11) and, most recently, East Texas (space shuttle explosion). In her next assignment, she’ll investigate crimes on New Mexico’s Indian reservations. As for the pistol shooting, she confesses with a laugh, “I really don’t care that much about it. I just like beating the men and then gloating.”

Solving Problems 'in the Messiness of the Real World'